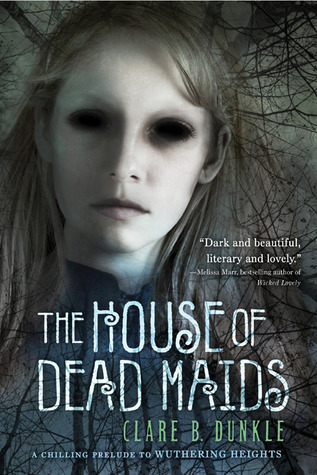 “She stood very still in the dusky passage where the light was the poorest. Like me, she wore the black dress that proclaimed her a maid of the house, but where mine was new, hers was spoiled by mildew and smears of clay. Thin hair, dripping with muddy water, fell to her shoulders in limp, stringy ropes. This was my companion of the night before – and she was dead.”

I was wondering what book to re-read next and this one was just perfect. It has been 7 and a half years since I last read it so I was bound not to remember most of the things. Plus, I could use some horror.

Meet Tabby, a sweet 11-year old girl who gets chosen to be a maid in a very big and important house. But getting there she notices that things are off. Not to mention the fact she is seeing dead people everywhere and one even comes to her bed every night (yup, that is just spooky). Strangely there are no live maids or other personnel other than the cook and the old maid in the whole home and that means that until the new master pops up… Tabby has free rein of the home. I loved seeing the girl explore, find new things, and look forward to her new master/boy she has to babysit.

I wasn’t a big fan of Himself/the boy, he was just obnoxious and annoying. Eventually we do find out what happened in his past and why that may have totally corrupted and broken his mind. But yeah, he definitely annoyed me. Thankfully, there are also parts where I liked the little heathen git (as he was called). He really opened up at points to Tabby and I loved the bond they slowly formed. Plus, they helped each other when ghosts appeared. Whereas Tabby was haunted by a little maid girl (whose identity we later find out and what connection she has to Tabby), the boy is haunted by someone else. I am not sure which of the ghosts I found creepier.

I guess I will just go for all of the ghosts. I read this one before I went to sleep which was a big fat nope.

As the two kids explore the mansion they discover something dark and demonic.. something dangerous. Which leads to something excited and OMG. The later parts was exciting and I was hoping that the plan would work.

The ending was good, but I think I would have loved it if the whole boy part would have been done before finding out what happened to our girl. It just felt a bit jarring and I had to reread parts to make sure I didn’t read it wrongly or missed something.

I found the Brönte connection a bit eh (though I only knew because of the last part of the book with the name of the boy + epilogue, otherwise I wouldn’t even have found the connection), but that mostly has to do with that I have tried read a couple of the books by the Brönte sisters and it just wasn’t for me. High school really destroyed the classics for me. Thanks.

All in all though I loved this book which was full of spooky ghosts, gorgeous descriptions of the house and what was in it, and I loved how strong the girl is both in her belief and her will. Also bonus points for the epic and spooky cover that will definitely haunt everyone.

2 thoughts on “Review for The House of Dead Maids”