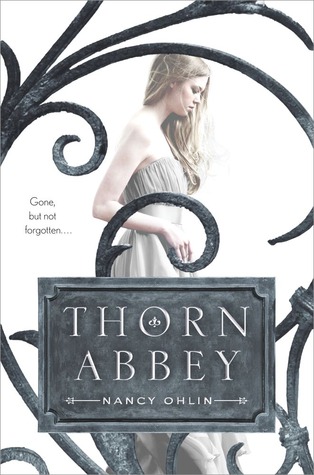 A new girl, a dead girl, instant love, and tons of mystery and fun.

This was another book I just had to re-read. Nancy Ohlin just has a great way of writing that sucks you into the book. It has been 7 years since I last read this one, which is a perfect time because by then I probably will have forgotten at least most of the book. 😛

I will still give it 5 stars because there were a lot of things that I loved, sadly there were also several parts that had me groaning in frustration. I am quite tired so I will make a good/not so good review.

Good:
-The boarding school setting. I just love that and I am always looking for books with that setting. Especially when there is a certain spookiness to the story as well.
Plus, I loved the descriptions of the school. The classes, the dorms and their names, the library, events that took place (I wanted to join so badly).
-I loved seeing Tess get used to life at an exclusive boarding school filled with rich kids and new lingo. I am glad to see that she was having such a good time at the school, sure at times she was overwhelmed by it all, but I think everyone would be if they are normally not used to boarding school. I liked reading about the lessons. OMG, Latin! I would have loved to learn that one. But then again, also Spanish. Soo many choices.
-The spookiness. Right from the get-go we notice that things aren’t all so nice. Tess hears crying, her roommate is acting like a creepy person with her talks in the middle of the night or her petting Tess and talking to her. And with each passing day and with each time Max and Tess get closer… things get more scary and creepy and I was all in for it. Because of my previous read I knew immediately who it was that was haunting the halls of the school, but I think it was pretty obvious either way as well. I mean there is just one dead girl who is connected to everyone.
-The truth about Becca and how she actually was. I had a suspicion of course given everything but it was still great when Tess found out as well.
-There were times I shipped Max and Tess. Sometimes they did make a very cute couple and I wouldn’t mind them getting together.
-However I was mostly shipping Tess with Franklin. He was such a nice guy and I liked him from the start.
-I love that Tess loved reading and studying. She reminds me of myself when I was her age, OK, maybe I was a bit less obsessed with studying (it was mostly just a chore).
-The last part of the book, HOLY WOW. I totally forgot about that. That is creepy as hell and a very awesome way to end the book.
-The last chapters of the book when everything reaches the climax and we see what happens when you piss off a vengeful ghost.
-I loved that we also read about Tess’ mom and friend who are at home. I do feel sad for Tess that her mom never had time to visit, not even at the end. That just was painful. I get she has a new job, and apparently stuff just sucks in the US, but come on, your daughter needs you now the most.

Not so good/I wasn’t a fan:
-The instant love. If there is something I detest in books next to love triangles it is instant love. And Tess falls pretty hard and doesn’t give a damn if someone tells her not to be with the guy. Even later on when things get a bit iffy and he acts weird she still longs for him. Even thinking about marriage?????? And no matter what happens she sticks with the guy which just had me cringing so badly. Girl, please.
-Max was just a terrible character for most of the book. I get he is getting over Becca, but how he acted around people and especially Tess was just weird.
-Devon. She was so hot/cold that it was just annoying. I get that she has problems that reach further than mental health being down but oh boy that was annoying. One moment she was sweet and the next she had all the remarks about Tess needing to diet and stuff.
-That brings me to diet. Why didn’t the school keep a bit more track of what their students ate? Hello? You have whole groups of girls not eating anything but bits of lettuce and maybe a piece of chicken. That is not healthy at all. And I wonder why Tess just went along with it. I get the comments probably, but I would also have liked her to stand up a bit more and tell them to screw themselves and their diet.
-At one point there is a ball and Tess wears something specific that has everyone’s hackles go up. WHAT THE HELL? She just has been here for a few months, how was she supposed to know about the whole thing? Hello? Are you all idiots? Stupid? Give that girl some credit.

But in overall, I loved it. The pacing was perfect, and there was enough that I really liked. I would recommend this book to all. Yes, there are some flaws, and they may annoy you but in overall it was a great read.

2 thoughts on “Review for Thorn Abbey”