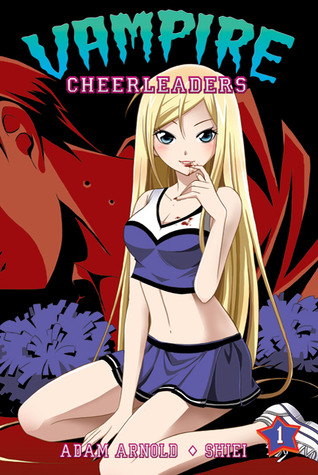 Another fun (though the second half not so) graphic novel featuring a vampire squad and later in the next half a worthless paranormal mystery squad written/made by Adam Arnold. Thank you to Seven Seas for offering this one (and others) for free.

Vampire Cheerleaders: This was a very fun read though I wasn’t a fan of the boy who liked Heather and I wasn’t a fan how it was solved in the end. Heather seemed like a cute sweet girl, but oh man when she turns into a vampire there is like a whole girl beneath that is eager to take charge and do whatever she wants. She really acts like a newbie vampire which I quite liked. I did think it was kind of dumb that the vampires stayed at the same spot for the entire time, hello, someone will notice one day because pictures are made. Do you really think someone will believe your spiel that it is your mom? laughs I guess glamour would work, but still, I would just move and settle somewhere else. I had a laugh at the two girls who kept bickering and everyone just started calling them love birds. Haha, I would have done the same. 😛
I had a bit of a laugh at the boys and then especially later with the squads and the solution the girls thought of to make things at least work out.. some way.
I loved that this was about cheerleaders and that it featured vampires and that we learned about vampires and all they do (lots of tanning stations and sunlotion oh and delicious watermelons with blood). The manga-style art was also great fun and I loved how the girls were drawn.

The Paranormal Mystery Squad: Eh, not my cup of tea. It felt too much as if we were thrown into a story and you need ALL THE details still but you don’t get them. There are hints here and there. The characters were just all annoying in my eyes, especially Stephanie was just a girl from hell. Did lord the attitude.
Also while I did think they went overkill on the cryptid they caught in the beginning…. I was confused why this was such a big deal? Again, maybe some more information would have been nice instead of getting thrown right in the middle of everything.. Then again, American graphic novels just LOVE to throw you right in the action and that is something I especially hate. Give me a chance to slowly get to fit in the world.
Plus, the girls were just enormously stupid. Ohhh, it must be x, and then it turns out to be y. And they make some random comment. Are you guys monster hunters or not? As it seems you are just three girls of which only one may have actual combat powers… And then Katie gets to be that? Oh man…. shakes head Later on the stupidity continues and my believe that these girls are famous… well that must have been all luck, because OH BOY the things they didn’t know or just randomly forgot. Lol, and stating that diabetes is better than being a half-vampire-thing. Oh God. End this please. So yeah, this was just not my cuppa tea. And I am not looking forward to yet ANOTHER one of this one in the next Vampire Cheerleaders… I wish this one could have gotten a release of its own so I don’t have to bother with this. Plus the art style seemed different from the Cheerleaders story, at points I liked it, but at other points… not so much.

for The Paranormal Mystery Squad.