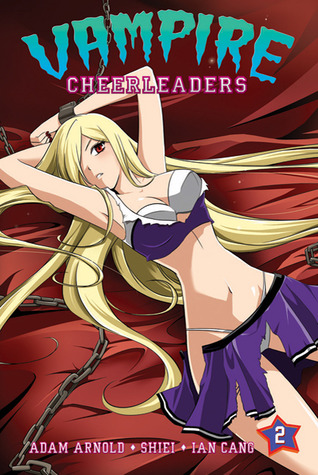 The second volume in both these series and well once again… I really liked reading the Vampire Cheerleaders but the Paranormal Mystery Squad was just not my cup of tea. I am still happy I finally had a chance to read this graphic novel, thanks Seven Seas for making them free.

Vampire Cheerleaders: The girls are back and this time they are going to do a cheerleading competition which had me totally delighted. I was curious to see how the girls would do and if they would win. What chaos would happen? Well, it was tons of fun to read. We also have the addition of a rivalry as another group appears and our girls are, after certain events, determined to beat that squad. Go girls, go. Plus, something is happening and I was worried. I do love that apparently our lead vampire is bi, at least that is how it feels to me. The other girls seem more drawn to males, but she goes for both female and male. I wasn’t a big fan of the scenes with the woman and our cheerleader, it felt highly uncomfortable given everything that happened and it turned me from the story/enjoying the story. And what the hell? Lori comes back days later totally in tatters and what does the b-team say: “Way to miss the whole competition. Not even so much as a phone call or a text.” What the actual fuck, you can see this girl hasn’t had the best of days and you say that?
I am glad we at least saw something of the competition including rivalry and some smooth moves. But yeah the whole kidnapping was just MMMM NOPE and the ending definitely says to me I don’t want to read the rest of the series. I come here for a bit of delightful silly romp featuring vampires who are cheerleaders.
I wasn’t a fan of the ritalin comment. As if just because you are energetic and bouncy you need that shitty pill down your throat. Urgh.

for this volume. Yep, it went down a lot given the previous volume got 4.5 stars.

The Paranormal Mystery Squad: sighs Here we go… Apparently the story continues with them being in court and getting community service (as I would call it). Yes, from what I can see their methods are harsh and cruel in the previous book, but then again, without any more information I am kind of wondering what other teams are doing. I am sure there are more of them. Are they all peaceful then? Is it only this group? More information please, but given how you just get throw in the story I am guessing that won’t happen. sighs And this is why I am often hesitant to read American graphic novel, they just love it a bit too much to just throw you in the story and expect you to magically know everything. Or maybe give you some backstory if you can stick around for a few volumes. No, just no.
This time our furry girl has dropped some boxes that are not all that good and that causes some trouble later on. Though again, I wonder about this team as all I can often see is them getting their butt kicked or causing endless destruction. They should really be more a team, and maybe get some more capable members.
I have to say I loved the convention and I know the frustration of having my name wrongly spelled. You would think it isn’t that hard… but apparently it is. Plus, the quarantine zone and that person taking over was pretty nicely done and I loved that at least one member was sane. But after that things just went wayyyy over the top for me.
Also, could you just use curses? Smurf? Frak? Come on. Either just leave it out all together or man up and use it.
And the ending? Was just a bit tooooo much coincidence. I guess I was expecting it though given how the whole story was written and how I knew that if they did x it would be enough. sighs

for this volume. Yes, 0.5 stars higher as there were finally things that I did like. But not enough for a high score.