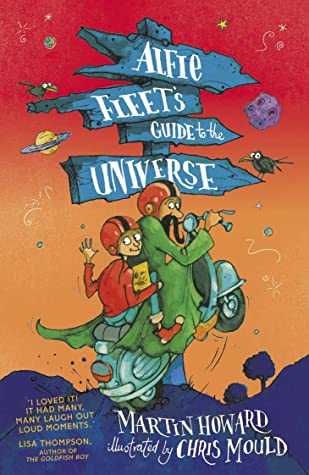 Time for a new Alfie Fleet book, sadly… I am disappointed.

This book clearly suffered of Second-Book-In-A-Series-Syndrome. For many reasons, and at times I wanted to just give up. Thankfully, there were parts that kept my attention and kept me reading. But still this book probably won’t be on my shelves for long. 3 stars is just not high enough to stay.
What I had hoped: Alfie and the professor start their travel agency, travel across planets, find new ones, go into an adventure with one of the travelling peeps. What I got was horrible villains, meh characters, and a quest that was fun but also a shame as we only went to search for one person.

This will be a good/not so good review.

Good:
-Seeing new planets. I definitely had fun seeing all the new places and what they were about. From planets where people had one word for almost everything and it all depended on how you said it to a dark lord who likes making cakes and dainty sweets (but also still loves murdering, don’t get that wrong). We go on a cruise, we meet new people, and we read Alfie’s descriptions of the planets.
-The planet information and how Alfie had a whole rating scale thought up so he could determine if this planet was a good one… or a weird one… or one to avoid at all costs (eww snot).
-When Alfie learns something he is at first unbearable, but later he shows that he has got it in him and I loved what he did for a certain group of people.
-Catsic was a great character and I love that he has so many books. Though OMG, no system at all in place. CHAOS!
I also loved reading about Catsic and what he did. He is a true Goldilocks though. 😛
-The island that Catsic lives on… sheds… sheds everywhere. I would have loved to see them. We do get a description which helped with building the image in my head, but I would have loved to see it in real life.
-The various circles we encounter.
-The illustrations. Chris Mould makes the most wonderful things and brings the story further alive.
-Seeing Betsy again. Come on, it is just hilarious that they travel all these worlds on a moped that is just falling apart.
-Seeing how the UTA was looking and how far they had things. I loved the brochures, I love what they did to the place. I loved seeing Alfie’s mom having fun with her new job.
-I loved seeing them find a new stone circle and I laughed so hard at what happened to that poor security guy.

-The addition of the villains/baddies. I was just rolling at my eyes at HOW CONVENIENT it all was that Alfie and the professor got to that planet and that those people were there. Oh my, how convenient. The villains were predictable, not fun, annoying, and I was just hoping they vanish to the end of the worlds.
-Alfie not being Alfie for quite a bit of the book. He was in the first book at times a bit eh, but in this book he took it up a bit more. He was grumpy. He acted as if he was the best (which wasn’t helped by a certain revelation at the end thanks to which Alfie became even more unbearable).
-People moral-knighting Alfie while being not too good themselves. We learn something about Derek at the end that had me very pissed. Such a hypocrite. Constantly saying correcting Alfie, but in the mean time she is doing x and y. The professor who knows everyone’s names but Alfie’s. Don’t get me wrong, it was slightly funny in the first book, but hearing him call Alfie Rupert the WHOLE TIME and even messing that up was just NOT funny. Dear professor you are just as big a twonk as Alfie is.
-The fact that we only see one of the old peeps from UCC/UTA being searched for. The book made it seem at the beginning we would be in for a journey, instead this book is all about the search for Catsic. I am not going to even spoiler tag it, screw that. But this part I will.

As you can see, a lot of good, that is why I am still rating it 3 stars. It is just a shame about the not so good points and how that brought the entire book down. Can you imagine that the first book was 5+ stars? That is quite a drop and so I am really diagnosing this book with the clear case of Second-book-in-a-series-syndrome. I do hope that if there is a next book we are back to how it was in the first book.