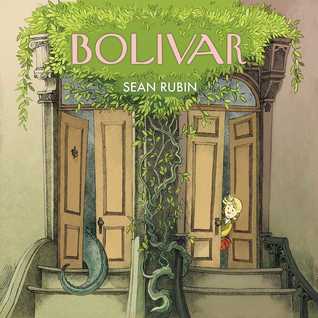 I have to say I thought this was a picture book when I saw it on Netgalley. But no this is a gorgeous and hilarious graphic novel about a girl who finds out her neighbour is… a dinosaur. But will she be able to convince her mom and people at school she is not lying?

It all starts with suspicions.Sybil is the only one who thinks something is up with her neighbour, and we the reader already know what is up, her neighbour is a dinosaur. Yep, there is a dinosaur just going his way eating bologna sandwiches (with ridiculous amounts of bologna), reading newspapers, and having a lovely time. Sybil herself tries to keep watch on her neighbour, tries to find him, while I did think she went a bit too far (privacy anyone?) I could also understand why she did all the things. I know I may also have had a hard time containing my curiosity. 😛 We see her hold stakeouts (falling asleep), hide behind things, make photographs and photographs and more photographs (eventually filling an entire wall with Polaroids). All that to find out who her neighbour is.

I did think it was funny that Bolivar didn’t even seem to realise at times he was a dinosaur, or that he cared.

While I do know that a lot of people don’t really see what is happening in front of them as they are so wrapped up in their own lives, I wondered throughout the story why no one, with the exception of Sybil, saw the dinosaur. It did get a bit ridiculous and yes, it also pulled away from the fun a bit. Especially when the part at the townhall and museum happened. How did no one notice?????? Sybil has to do everything to make people see the dinosaur, though I was also already eager to warn her that this may end up in chaos. While your neighbour is a good dinosaur, a law-abiding, not-eating-humans, dinosaur… he was still a dinosaur and one that is generally seen as one that noms on humans.

I laughed at quite some parts, but the best one would be the part about the mayor.

The last part of the book had me both worried, a bit sad, but then at the last pages also very happy. That was a great ending and I am happy for not just Bolivar (the dinosaur) but also everyone around him.

The art is absolutely stunning, I just love the style, the amount of details. It really sucks you in the story and I loved seeing the city and Bolivar and Sybil travel through it. I want more of this artist, see what more they have made.

All in all, a sweet and hilarious read that I really loved (OK, still not a fan of the no one saw the dinosaur part, but that is really all) and which I would highly recommend.