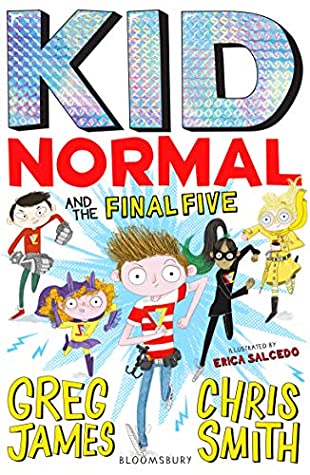 It is time for Kid Normal and his friends to beat the final boss in this delightful and fun last book of the Kid Normal series!

Knox is back and he is more evil than he was in the previous book. He is now truly desperate to make sure everyone mistrusts the heroes and he is doing a good job. Well, later on at least. In the beginning it was quite funny how desperately he tried to make people believe him, and how it did work… at least for a bit. His next plan was much more evil and it was a plan truly worth a supervillain, the last boss of this series. It not only affected those he wanted to affect, but also had the extra effect of affecting certain people which made his plan even grander.

It was all very exciting to read, how things went south, how the rebellion started, seeing Fiona and Angel again, seeing various other characters, escapes from prisons, making plans. OMG, it was a rollercoaster of a ride and I definitely could not put this book down. I just had to know what would be next, what was the villain’s next plan, would our team be able to defeat him/make a plan? I loved that the Superzeroes got such a major role in this one. They are still pretty new to the superhero business and some people still doubt them, but I think after this one they are even more appreciated, even by that grumpy old teacher of theirs.

The final battle, OH MAN. That was just the best, it is truly a spectacular battle and worthy of a final boss one. Rogues, the army, helicopters, superpowers, and something very very big and angry.

There are various fun references to so many things. We see Sound of Music pop up, read how villainous comic sans is (to which both me and my hubby were agreeing), and much more. It is like a game, how many references can you find/recognise.

And, like the others, there is the fourth wall that gets broken at times. Everybody who knows me knows that I LOVE stories that break the fourth wall. OK, it could have done without that lame rabbit story, but the rest was perfection. It is great fun when the author/narrator talks to the reader.

I love it when titles come back and are mentioned in the book. I already had a suspicions who the Final Five were, and was delighted to see it be true.

Like the other books this one is wonderfully illustrated. The style just fits so well with the story and the hilarious and exciting moments.

Oh, I was a bit worried about the Mary situation… but I shouldn’t have worried. I would like to say more, but I don’t want to spoil or use spoiler tags. So you will just have to read the book. 😉

As with the previous book when the villain pops up and gets a POV, I just either spedread through it or just skipped it. Mostly skipped it. I am sorry, I am just not a fan of villains. With some books I can stomach to read them, but in this series I just cannot. The villains are just so ehhhhhh. And I get it, they are villains, but if it makes me want to throw a book in a corner (sorry book), then I am not going to read their POV.

But all in all, I loved this book and I loved this series. I will definitely miss it. It was just so much fun, it made me laugh, it made me giggle, it was exciting and super. I would highly recommend it.