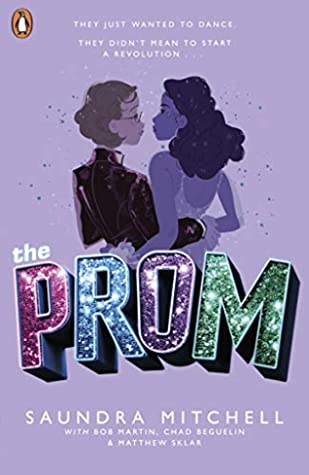 Two girls who want to go to prom together in a backwater town find trouble and chaos. Sadly, there were also things that were just unbelievable which lessened my liking for the book.

I just love books like this. We don’t have prom here, so I am always looking for books that are about it. And this one was even higher on my OMG list when I found out it was about two sweet girls who wanted to go to the prom together. And the difficulties that followed.

Because this town doesn’t like LGBT people. This town doesn’t want them there. And Emma just wants to go to prom. I could feel that. And I was just heartbroken that all the things that already happened to her (her parents throwing her out of her home, bullying since then) only got worse and worse, and still she wanted to continue, because she also deserves to go to a prom. I just wanted to hug Emma so many times. Because things are hard and they get harder and harder, especially when prom happens and something awful happens. The poor girl completely falls apart and again I just wish I was there so I could hold her. No one deserves the things she went through. No one.

While I knew something was up with those Broadway stars I still enjoyed seeing them around, especially Barry was a favourite of mine. He really helped out Emma, he was there for her, and he made her feel like she wasn’t alone. And I loved that they did everything they could for Emma and the prom. Sure, they had some egotistical reasons, but I know that at least Barry also meant it when he did all the things he did. Of course, I was a bit pissed when things came out. I expected it, but I was hoping it just wouldn’t be true.

I was a big fan of Emma’s grandma who was a kick-ass lady who didn’t take crap from anyone and I loved how she helped out Emma, consulted with her if she really wanted something. She was just the sweetest and I am so happy Emma got to live with her.

I would have loved to see more romance between Alyssa and Emma. Now we have to rely on a lot of memories, and maybe a couple of moments.

I am glad that we saw POVs of both the girls, Alyssa and Emma. I have to say I was pulled more to the Emma POV. I don’t know Alyssa is a sweet girl, but something was just not working with her for me.

I still don’t get why people are afraid or angry at LGBT people. It isn’t a disease, it isn’t something bad, it isn’t contagious. People should really be more open about things, and maybe read the bible a bit better and not just pick out the parts they like or that fit with their ideas.

However, there were at least three things that I found a bit too magical and which is why the book was almost a 4 star, but in the end there was enough to like so 4.5 star. I will put these under spoilers.


Now I can hear you say, but Mehsi what about those Broadway stars that coincidentally hit the town. I can believe that, I have seen some stuff in newspapers, mostly from the US though, where this stuff is possible. I don’t know how, but Youtube is a powerful medium that can make stuff happen.

The ending was pretty sweet and I loved that there were second chances for many things (and no I won’t spoil which ones).

I also LOVE LOVE the cover, it is so sweet and I love the purple colour.

All in all, in overall, I loved reading this one, it was a good read. I would recommend it.

3 thoughts on “Review for Prom”