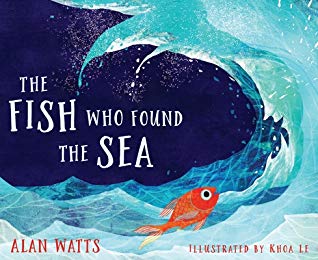 How can I resist such a gorgeous cover. I am a cover lover and this book just made me have heart-eyes.

Sadly, I have to say that I didn’t enjoy this one as much. This has nothing to do with the art, that one is just absolutely stunning and took me on a trip of its own. But the problem I had was with the words. There are so many of them. A whole block of text with a boring and bland font, tons of words that the tiniest ones probably wouldn’t understand and some older ones may also have a hard time with. Really, who thought sentences like: “he whizzed around in circles in frantic pursuit of his own end” or “Still more, the Great Sea always surrounded them in such a way that it bore them up, and made itself transparent so that they could see where they were going and enjoy all the wonders of the deep.” and several others, were a good idea? I know there are picture books with more text than normally, but in this case it just didn’t fit. And quite often the sentences flow a lot of better in those books. This was at times just too dense. Even I had to re-read sentences as I couldn’t believe they were there. You have these gorgeous illustrations and the text is just taking over, it is a big and dense presence.
Not to mention that the story got quite depressing but thankfully picked up later on.

The idea is there, a fish who finds the sea, finds out what swimming is and then a happy ending. The art is there (again stunning). The cover is there as well. But then there are these blocks of text that just drown it all. But one could easily also tell the story, in probably easier words and with less fanciness, by looking at the illustrations.

2 stars for the art and the idea.