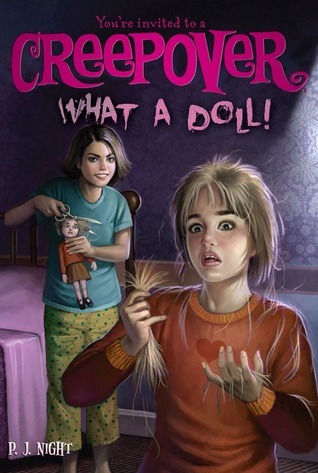 What will you do when your best friend leaves you alone for others and you get a doll that looks A LOT like her and that seemingly seems to control her? Would you use it? Or would throw the doll away?

The second re-read for this series and I was excited to start it. I had forgotten most of the important details after it being almost 6 years since the last read. I was curious how far our MC would take her revenge and her anger and what would happen in the end.

Meet Emmy. A sweet girl but who gets hurt badly by her best friend. First her hair gets cut off to nothing (just a trim…. as her friend would tell her) and then her best friend leaves her alone while they were having a sleepover. And there are other things her old best friend does. I was pretty angry at the whole cutting hair part. Girl, I get that you may think Emmy doesn’t have the best hair? But don’t do this. You should have known you had gone too far and you should have apologised immediately.

I have to say that while I was OK with some stuff she did with the doll to teach her friend a lesson (painting her nails black was quite hilarious), I was NOT OK with many others. How she was totally fine that her friend broke her leg… that she threw the doll around like mad, and some other stuff. I was just disgusted with this behaviour and I actually felt sorry for Liz. No one, especially not when they haven’t done anything really terribly wrong (cutting hair is bad.. but that grows back) is just so NOPE. I didn’t like the Emmy we got to see in this book. She went too far. She should have quit as soon as she knew what was up with the doll. I get then we wouldn’t have a full story, but I can imagine some ways that this one could have still ended up a good story without having a character do the things they did in here.
Despite it being hard to read, I was still eager to keep on reading as I wanted to know how long it would take for Emmy to realise that what she was doing was bad + I wanted to know if she would eventually get rid of the doll or something else would happen.

Well the ending was pretty great, I was a bit surprised by it, but it did fit with the book perfectly. Good luck Emmy.

But all in all, despite some eh points, I still couldn’t put this one down and I read through it quite quick. This was a good book in this series.

2 thoughts on “Review for What a Doll!”