Happy humpday and welcome to a new cute Waiting on Wednesday! This week I am featuring Camp by Lev. A.C. Rosen which is coming out at the end of this month.

I just love books about camps, especially the American ones as they always seem so grand and fantastic and full of activities. I have been to a few summer camps where I live and believe me… not that much fun. Sadly. So I am very excited about this and even more excited about the fact this is about a camp for queer teens and features a big musical!

I am a bit worried about the whole changing for someone you love plot part, I just hope that this doesn’t get to be a too big part and hopefully not right from the beginning as I want to get to know Randy first. I do hope that Randy can be honest about things and that it doesn’t take until the end of the book (I hate when that happens).
But other than that, bring it on! Give me some campy goodness. I will probably wait with reading until July/August when I hope to be taking my camping vacation again with my hubby. 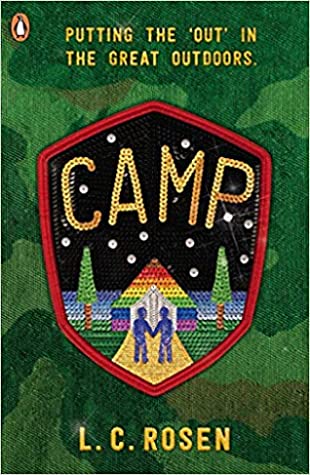 From the author of the acclaimed Jack of Hearts (and other parts) comes a sweet and sharp screwball comedy that critiques the culture of toxic masculinity within the queer community.

This year, though, it’s going to be different. Randy has reinvented himself as ‘Del’ – buff, masculine, and on the market. Even if it means giving up show tunes, nail polish, and his unicorn bedsheets, he’s determined to get Hudson to fall for him.

But as he and Hudson grow closer, Randy has to ask himself how much is he willing to change for love. And is it really love anyway, if Hudson doesn’t know who he truly is?