Welcome to a surprise Cover Reveal Time at an unusual time, I am excited to share with you the kick-ass cover for Bait by Kasi Blake! I just had to help out when I got the mail a couple of minutes ago. And since tomorrow and the day after I already got book promos planned, I thought best to do it now. I am a bit tired, but fired up to share this post.

Next to revealing this cover I also got an excerpt and a giveaway. And of course, book and author information!

This girl will kick your ass! 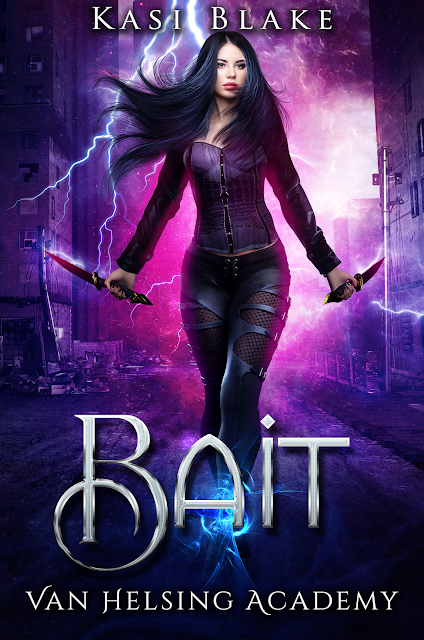 As the only living child of the great Van Helsing, you would think Bay-Lee has an extra advantage when joining her father’s school. Wrong! The other students resent her; an angry young hunter with the most amazing green eyes refuses to mentor her; and someone or some ‘thing’ is killing students on their birthdays.
She knows her life is about to change in a big way when a dead rock star shows up in her room in the middle of the night. Then a reaper comes flying out of her closet to issue a warning. Something is happening in the Spirit Realm, something bad.
Bay-Lee teams up with the gorgeous hunter and a mean-girl with a deadly secret to solve this mystery before they all die. Her birthday is coming up fast. Will her first year at Van Helsing Academy be her last?
Join us at Van Helsing Academy… if you dare. 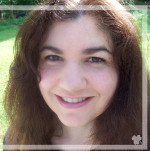 Born and raised in California, I fell in love with writing while reading The Outsiders. Then I fell in love with Stephen King’s writing style. I enjoy reading many types of books, but YA Paranormal is my favorite. I used to write for Harlequin under a different name. So that’s my background. Exciting, no?
I have several books out now including Vampires Rule, Werewolves Rule, Crushed, Witch Hunt, Bait, and 4-Ever Hunted along with the others in the series.

Bay-Lee stepped forward to lay a red rose on the coffin lid.
“I’m right here,” Nick said.
His presence gave her a burst of strength. She straightened her back, standing tall, and turned to face him. He looked incredible. Her fingernails dug into the flesh of her palms. Pain helped. It kept her from losing her mind and throwing her arms around his ghostly form. She couldn’t touch him. Wraith or ghost, he wasn’t a solid mass anymore. Her hand passed through him whenever she forgot and reached out.
“This is my second funeral,” he said.
She winced. “Please don’t.”
“I wish I could hold you.”
“Don’t.” She repeated the word, louder this time.
“You look absolutely incredible, so beautiful. You’re even beautiful when you cry. Did I ever tell you that?”
Her life was weird. She was in the cemetery with her dead boyfriend. Not only could she see him, she could hear him. The only thing she couldn’t do was touch him. Being with him and not being able to do something as simple as kiss his cheek was pure torture.
“I can’t believe you’re gone,” she said to the coffin.
“I’m not gone,” he said, his impatience showing. “I’m right here.”
Before she could argue the point, Alec returned. “You did this,” he said. “You killed my brother.”
She gasped.
“Was Van in on it with you?”
Nick stood between them.
“Everyone was so afraid Nick would become evil. You and Van did this to him.” Alec shouted, “Admit it!”
A vicious growl startled her. Werewolf? No. It was Nick. “She didn’t kill me, you idiot! Leave her alone!”
Alec got in her face. “You don’t belong here! Go home.”
Van and Bruce appeared in a flash. They each took an arm and walked him to his car. Bay-Lee watched, her entire body trembling with rage and grief. Keisha put an arm around her shoulders. Together, they left the cemetery. Bay-Lee refused to look back to see if Nick was following them. She told herself she didn’t care.
Bay-Lee spoke quietly. “Tyler Beck got a nationwide memorial service. He was mourned by millions, and he was only a musician. Nick is worth a hundred Tyler Becks, but no one cares he’s gone.”
“I care.” Keisha gestured to Mike who was waiting at the car for them, sunglasses hiding his swollen eyes from view. “He cares.”
“Nick deserved better than this.” She glanced back at the grave. “He was a hero, but people have no idea. They don’t care he’s dead.”
She started crying again. It was impossible to hold back the flood of tears. Feeling humiliated, she climbed into the backseat of the limo. Keisha got in after her. The girl pulled Bay-Lee into a tight embrace. “I’m sorry,” Keisha said, and this time she sounded like she meant it.
That made Bay-Lee cry harder.