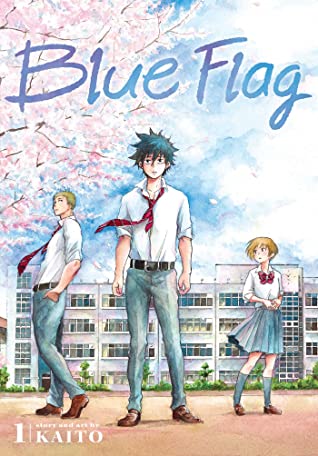 This is an absolutely gorgeous story about 4 people falling in love.

Thank you to Manga Mogura on Twitter for hosting the contest and yay for me being the winner of it! I have been looking forward to this manga for a while now and I finally have the chance to read it. Yay!

While I am normally not a fan of a love triangle/love quartet, I have to say this one was well-written and that I enjoyed it. This is a very rare occurrence so well done to the writer/mangaka. Since the blurb already tells us what is going on there were no revelations, but I am still happy with how things were shown throughout the story. How we see Futaba fall for Toma, how Taichi helps Futaba… and falls in love with her. And how we see Toma and the girl who I don’t want to know like them and confess the feelings they have for Toma and Futaba to each other. It was so well done. I never once felt that it was too much or too annoying or too argghhh. I was rooting for everyone in this one.
I especially loved seeing Futaba grow. She was quite mousy and quiet in the beginning of the story but grew more and more as the story went on. She was still a bit silent, but she did try her best so so much. I was rooting for her. And while I was a fan of her with long hair, short hair also looks very adorable on her.
And seeing Taichi go from feeling annoyed with Futaba to starting to like her and getting feelings for her was just wonderfully written and I loved seeing the realisation appear on his face when he figured out that he liked her. But he couldn’t tell her as he had promised to help her out confess to his friend, Toma.

I wasn’t a fan of the black-haired girl at all. She was just so rude, so mean, so horrible. I had a feeling why she was acting this way, but I am sorry to say, this doesn’t excuse her from almost going violent on another person. She kind of ruined it for me a bit. Up to the point it was all good, but this…

I had a laugh at Taichi’s friends and how they just stood out from everyone in the school. Though at times it just felt a bit much especially since no one seemed to look like them and it just felt done on purpose.

The art, HOLY WOW, that was just so gorgeous at many points. Especially when we got close-ups of the characters faces and their expressions. It was just so beautifully done.

All in all, an amazing read and I definitely want to read the rest of the series as well. Sorry for keeping it short and to the point, I have been trying for almost 2 weeks now to write this review, the words are just not coming out easily which happens sometimes when I just love a book too much.