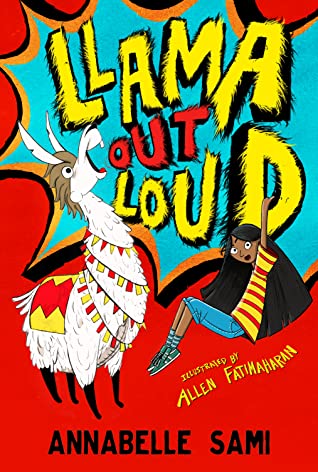 This book sounded AMAZING, and so right up my alley. I have been a shy kid myself, so the book sounded hilarious. Fun pranks, fun ways to make someone more happy in their body. However the pranks were harmful and unfriendly and for me downright shitty. I hated Levi so so much. And frankly, it is a good thing I never got a llama guardian like that when I was that age, because I can tell you that would have ended badly. For me. I wouldn’t have been able to handle that along with bullying and feeling insecure about myself. And yes, I know I am not a child so maybe this book isn’t for me. Well, I read enough children’s books that I loved, that made me laugh or cry or giggle, that brought me joy. And besides, again, 10 year old me? Wouldn’t have been amused with this shit either. I know myself and while I did change from when I was 10 (who hasn’t?) there are things that stay the same. Magical annoying animals have never been a favourite of mine. Pranks that harm someone? Also no. Feeding animals chocolate? Also no. Yes, that last one? That happens. And I think it is bad that that keeps being added to books. Dogs being fed that, cats being fed that, hamsters being fed that, and now goldfish/fish.

It was a big struggle to get through this book, I was constantly looking to my kindle’s % in the hopes I was almost done. Sadly, most of the times it was a no.

I wanted to get rid of Levi so so much. Man, I love the name Levi, and this is not making me happy. The Llama was just so annoying and so aggravating. He must have seen that he wasn’t helping.. he was just destroying things. 😐 Later on we do find out his intentions, but come on. Maybe a little less pranks and stupid things that bring the one you are helping in trouble? I mean who the hell slaps a fish into someone’s face because he wasn’t getting attention (and then calls getting detention something good). Or who thinks it is a good idea to drag garbage throughout the house so that the girl gets in trouble? Or who thinks it is funny to write a letter about bum worms so she almost loses her competition? Who thinks it is funny to do that and all the other things? You are not helping her. Instead you are making her sad, you are making her angry, you make her feel crap. And then there is the thing he sent to the boss of OLD after Yasmin won the competition. WHAT THE ACTUAL FUCK. Sorry, but that was just messed up. And it just made me want to throw my poor kindle to the wall. Yes, maybe she should spend time with kids, but who the fuck cares if she wants to fucking be with old people and play chess with them? Kids don’t need to just be with kids. 😐 Who are you to fucking decide that for her? Fuck off.
“LLamas love kids.” Well, is it OK if I don’t believe you given the shit you pulled?

Also wtf was up with the parents? Wanting to put your daughter on a plane to Pakistan for TWO things done wrong (which were Levi’s fault, not hers btw, but since it is a magical llama…). All the while the boys do more crap and never seemed to get any reprimand or threats. I found it very annoying and I could clearly understand why Yasmin decided to hide and stop talking. And constantly shouting. Talk normal. Listen to your kid. Who doesn’t celebrate their kids birthday? Some people shouldn’t get kids if they can’t treat them right or even give them time to explain things (though given the magic llama… ). But still. Let your kids tell or write their side of the thing.
And then at the end there is a big boohoo dramafest that just felt like it came out of nowhere and that felt so utterly fake… at least to me. The parents have been acting this way but instead they were actually doing y? HAHAHAHAHA. No.

And why did she feel guilty at 80%, I would have been cheering and bouncing around.

I did love the chess stuff, I loved how good Yasmin was at it. I did like Ezra and Yasmin becoming friends (and I think the whole llama wasn’t part of that happening). Ezra was a fun character and definitely reminded me of myself. 😛

The art was OK, though on my kindle it was all broken up so I missed art or it was all weird. But the art was definitely the one thing I was looking forward to the most.

I was happy with the ending though, but I don’t give credit to Levi. I am sure that she would eventually have found her voice given how far her parents went with their crap. Plus, hey, if Levi wasn’t doing anything things wouldn’t have escalated to this point. Think of that. I did like the plan they concocted to get back into OLD (though it was way obvious, especially if you bring parents :P). But again, no credit to Levi. At all.

So this was definitely not for me. I kept hoping it would get better, but instead of that it got worse, but by then I didn’t want to DNF (I generally don’t DNF when I get over 40%). sighs I was looking forward to a fun, hilarious book, instead I got this.