A warm and happy welcome to the Blog Tour for The Mall by Megan McCafferty! We are going to have a blast to the past with this book, I still want to read it, hopefully I can do so during my vacation. Because this is one book that is high on my need to read list.

For today’s Tour Stop I got an excerpt (chapter 1) and book/author information.

Let’s get this tour started~ Yay! 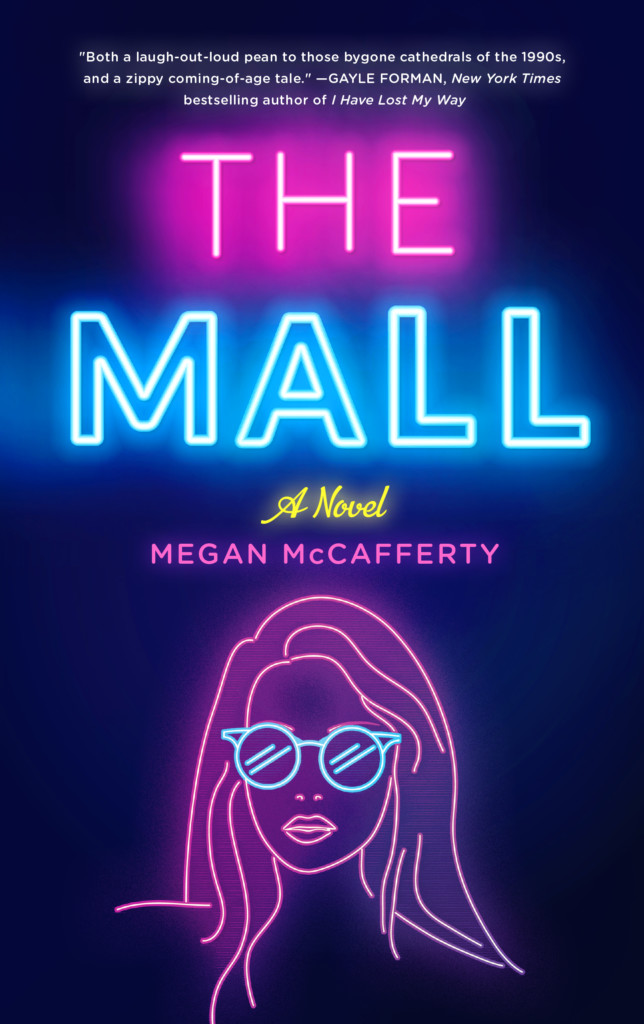 New York Times bestselling author Megan McCafferty returns to her roots with this YA coming of age story set in a New Jersey mall.
The year is 1991. Scrunchies, mixtapes and 90210 are, like, totally fresh. Cassie Worthy is psyched to spend the summer after graduation working at the Parkway Center Mall. In six weeks, she and her boyfriend head off to college in NYC to fulfill The Plan: higher education and happily ever after.
But you know what they say about the best laid plans…
Set entirely in a classic “monument to consumerism,” the novel follows Cassie as she finds friendship, love, and ultimately herself, in the most unexpected of places. Megan McCafferty, beloved New York Times bestselling author of the Jessica Darling series, takes readers on an epic trip back in time to The Mall.

Buy this book here: Wednesday Books
About the author:

Megan McCafferty writes fiction for tweens, teens and teens-at-heart of all ages. The author of several novels, she’s best known for Sloppy Firsts and several more books in the New York Times bestselling Jessica Darling series. Described in her first review as “Judy Blume meets Dorothy Parker” (Wall Street Journal), she’s been trying to live up to that high standard ever since.

1
MOST LIKELY TO SUCCEED

Less than five minutes into my triumphant return to the mall, I was targeted for assassination by a rabid spritzer
from Bath & Body Works.
Before the ambush, I was as happy as anyone making min- imum wage could possibly be. It was by far the best mood I’d been in since the night in late May when I’d landed in the ER with a teeth-chattering, bone-rattling case of mono. After six weeks of quarantine, I was finally reunited with my boyfriend, Troy. We had gone from seeing each other every day to not at all, and I could tell Troy was a bit discomfited by the space forcibly put between us. Luckily for him, I’d spent that time at home alone convalescing and contemplating the state of our re- lationship. By the end of my confinement, I’d come to a course- altering conclusion:
Troy and I absolutely needed to have sex. The sooner, the better.
I was barely keeping it together on the short walk from the parking lot to our jobs at the food court.
“I missed you so much!”
I angled for a kiss as Troy turned his head to check his watch.
I got a mouthful of earlobe instead of lips.
“Not now, Cassandra,” Troy said without slowing down. “I’m late for my shift.”
“We’re late for our shift!”
The Parkway Center Mall was home to 105 specialty shops, three department stores, and two movie screens. This 900,000 square foot monument to consumerism was Pineville, New Jersey’s, de facto downtown. Never referred to by its full name— always and only “the mall”—this capitalist mecca wasn’t the big- gest or the best or the newest our state had to offer, but it was the closest. For that reason alone, the mall was the center of the universe for bored hordes of suburban teens with limited spending money and infinite time to waste.
The mall also provided summer employment for roughly half of our high school’s working class. The rest took their chances at Casino Pier in Seaside Heights. The pay was slightly better on the boardwalk, as were the odds that you’d lose a finger while operating the Tilt-A-Whirl because that’s what happened when hungover minors helmed heavy machinery. Troy and I had taken the safer route by getting hired by America’s Best

Cookie: “Where home-baked goodness is as easy as ABC!” The recession had hit other businesses hard, but in times of trou- ble, Americans evidently comforted themselves with Chocolate Chippers and Fat-Free Fudgies. Troy and I had just completed our new employee training when I got sick.
“I don’t know if I’ll be able to keep my hands off you when I see you in that sexy apron.”
I was half kidding. My boyfriend of two years was wholly mortified.
Troy was not an obvious target for lusty objectification. He was my cherry-cheeked cherub, whose angelic face often caused opponents in Mock Trial and Odyssey of the Mind to under- estimate his devilishly clever brain. Also, I’d never been, like, an excessively horny girlfriend. When Troy and I made out, my mind often wandered. Would the collapse of the Soviet Union end the Cold War? Why did anyone think Urkel was funny? But forty-three days of social isolation and physical deprivation had taken a major toll. From the moment he had picked me up at my house in his Honda Civic, I’d wanted to grab him by the popped collar of his America’s Best Cookie polo shirt, press his body against mine, and break every rule we’d ever set against public displays of affection.
We passed Spencer Gifts, a store that sold smutty merchan- dise alongside kitschy novelties.
“Pity the naive child who enters Spencer Gifts for fake poop,” I joked, “and exits with cinnamon-flavored lube.”
Troy said nothing.
“Pity the pure babe who enters Spencer Gifts for a lava lamp,” I tried again, “and exits with glow-in-the-dark condoms.”

The mall had three main entrances, each located in front of a major department store. My family always entered the mall through Macy’s, but the first time Troy drove me to the mall, I discovered his preferred entrance was through Sears.
“If we’d parked at Macy’s, we’d be there already,” I teased, leaning in for a kiss.
He ducked, deftly dodging my mouth for the second time. “Are you sure you aren’t contagious anymore?”
I almost couldn’t blame him for being so paranoid. He was more traumatized by the extremity of my illness than I was, if only because he could actually remember the details. Troy was the one who took me to the ER. He was there when Dr. Barry Baumann said my spleen had swollen to the size of “a small spaghetti squash,” which was an oddly specific gourd to choose from all of the more common vegetables he could have selected. After I was hooked up to various IVs and my temperature finally went down and I wasn’t in immediate danger of dying, Dr. Baumann said mine was the most severe case of mononucleosis he’d ever seen in forty years of practicing medicine.
“Overachiever,” I’d rasped. “Even when it comes to viral infections.”
Each word was more excruciating than the last, as if Dr. Baumann had removed my vocal chords with rusty garden shears, scrubbed them with bleach, and reattached them to the back of my throat with six blindfolded sharpshooter blasts of a staple gun.
“That’s not funny,” Troy had replied.
I disagreed. It was a little funny. If anyone knew anything about overachieving, it was us. We were the couple with the

plan. The boy and girl Most Likely to Succeed, as voted by our Pineville High School classmates and forever immortal- ized in the yearbook superlatives. Troy and I studied hard— together—to get into our dream schools—together. I was set to attend Barnard College in the fall where I’d major in biological and biomedical sciences en route to med school. Troy would be right across the street at 116th and Broadway, an econ major at Columbia with both eyes on business school. We thought it very mature of us to attend different schools within the same university system. Our parents would cover tuition, but Troy and I were responsible for earning money for books and any nonacademic purchases very loosely described as “incidentals” that to me were anything but. It was all part of the plan.
We passed the One-Hour Fotomat where I would’ve gotten all my pictures from prom and graduation developed if I hadn’t been too sick to attend either of those events. Mono wasn’t fun any time, but it particularly sucked in June of my senior year. Troy made me feel better about missing prom by reminding me how anticlimactic it was, as these things predictably were.
“Prom only matters for those who don’t have anything better to look forward to,” Troy had said. “If you can’t go, I won’t go either.”
Of course, Troy was the type of boyfriend who would offer to stay home on prom night in solidarity. But I wouldn’t hear of it. He’d already bought the tickets, rented a tux, and put a nonrefundable deposit on a limo shared with a small group of friends. Plus, we both assumed it was only a matter of time before his own symptoms developed. So I stoically urged him to live his life before he was struck down.

I wasn’t disappointed about prom. Graduation was another story. If I hadn’t gotten sick, would I have been the senior class speaker instead of Troy? I was happy for him, of course, but while my classmates were celebrating in top-down, cherry-red convertibles and skinny-dipping in pristine swimming pools, I was building igloos out of blankets and waiting for my internal organs to shrink back to normal size.
Troy and I slowed down in front of a pyramid of Billboard Hot 100 CDs displayed in the window of Sam Goody. Among all the usual, commercially successful but terrible suspects— Color Me Badd, Poison, Wilson Phillips—I was pleased and quite surprised to see a poster promoting Morrissey’s newest re- lease. The shot was taken from below, the photographer on his knees, the Moz all in black, rising up against the backdrop of a cloud, arms outstretched in a way that, for me—and I wasn’t religious at all—evoked a priest performing a benediction.
“I’ll drown myself in the Wishing Well if we don’t get tickets,” I said solemnly, referring to the chlorinated fountain where shop- pers literally threw their money away. Pennies, mostly. But still.
Troy picked up the pace, easily overtaking a pack of power walkers. My wobbly legs struggled to keep up.
“It would be fun for us to see his show in New York City,” I said. “Not, like, fun fun, because, you know, Morrissey, but, like, depressing fun.”
Troy stopped so abruptly, his curls quivered. He looked to the Piercing Pagoda’s lone employee for reinforcement, but she was too preoccupied with a paperback Danielle Steel novel to take any interest in the teen relationship drama playing out right in front of her.

At last, his innocent blue eyes met mine. “Let’s just get through the summer.”
Those were the final words I heard before taking a violent blast of cucumber-melon body spray
right to the
friggin’ face.