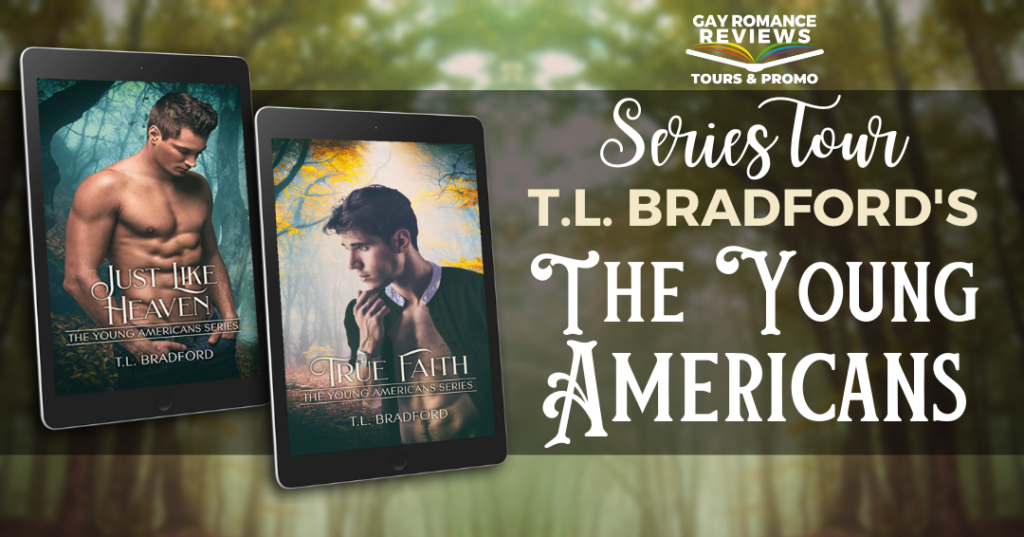 Happy weekend all! A swoony welcome to the Blog Tour for The Young Americans Book 1 + 2 by T.L. Bradford!

For today’s tour, oh boy I got a lot! I got an excerpt from the second book, several teasers from both books, a giveaway, and book/author information! Enjoy all of it~

Time to get this tour started~ twirls 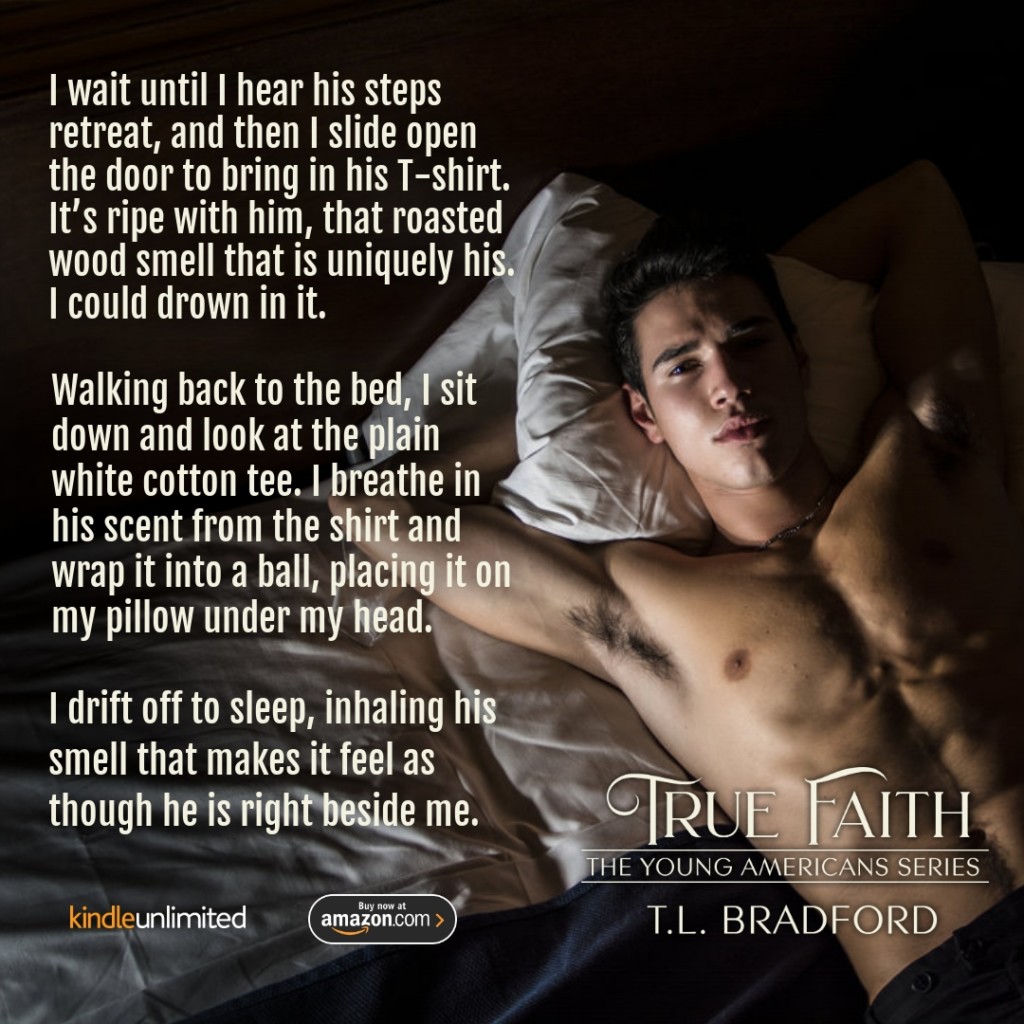 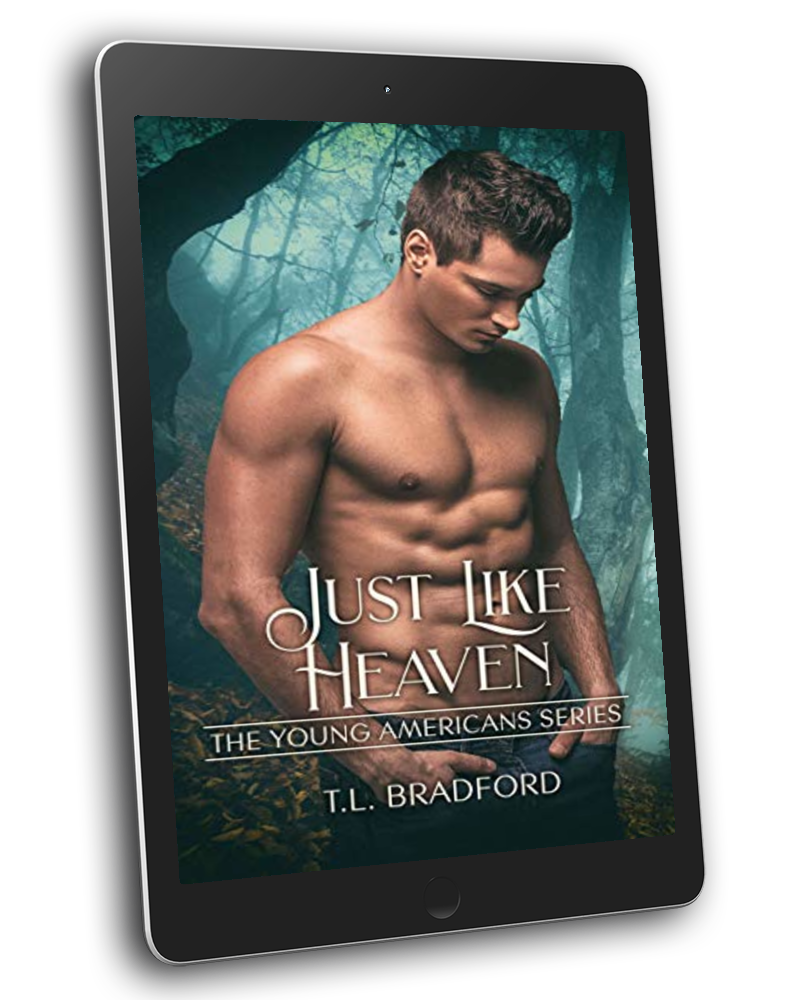 Noah Sinclair is best described as an egotistical, pompous, anal retentive, asshat. And those are his better qualities. Lately, Noah has lost touch with his playboy character “Jace” on the show Americana and can’t quite put his finger on why. The studio decides it is time to shake up his character by making him an offer he can’t refuse, literally. They will introduce a new love interest for his character “Jace.” Only this time, there’s a twist.
Josh Hill is up a creek and sinking fast. He’s got no job, no money, no credit and is about to be kicked out of his apartment. Opportunity comes in the form of a job offer from the show Americana. Everything should be perfect; only there is one hitch. He will be the new love interest for Noah Sinclair’s character on the beloved show.
So, opposites are supposed to attract, right? Not so fast. No one said life was that easy. Both actors find themselves in untested waters. Will they be able to play a same-sex couple with no prior experience authentically? Well, they say practice makes perfect.
Carefree, fun-loving Josh and uptight, overbearing Noah, realize they need to make the best of their bad situation and are forced to find common ground. Over time, their roles in each other’s lives become blurred. Is their attraction fake, or is it real? To top it off, Noah has a dark skeleton in his closet that can prevent them from ever moving forward.
Can they get on the same page and save both of their careers and their relationship?
Or will they end up yesterday’s tabloid fodder?

(Just Like Heaven is a full-length, slow-burn love story. It contains a cast of fully-developed characters that encounter romance, heartache, laughter, and life lessons. The book has darker themes that may act as triggers to some readers. It contains adult language, mature themes, and is best enjoyed by those over the age of 18.) 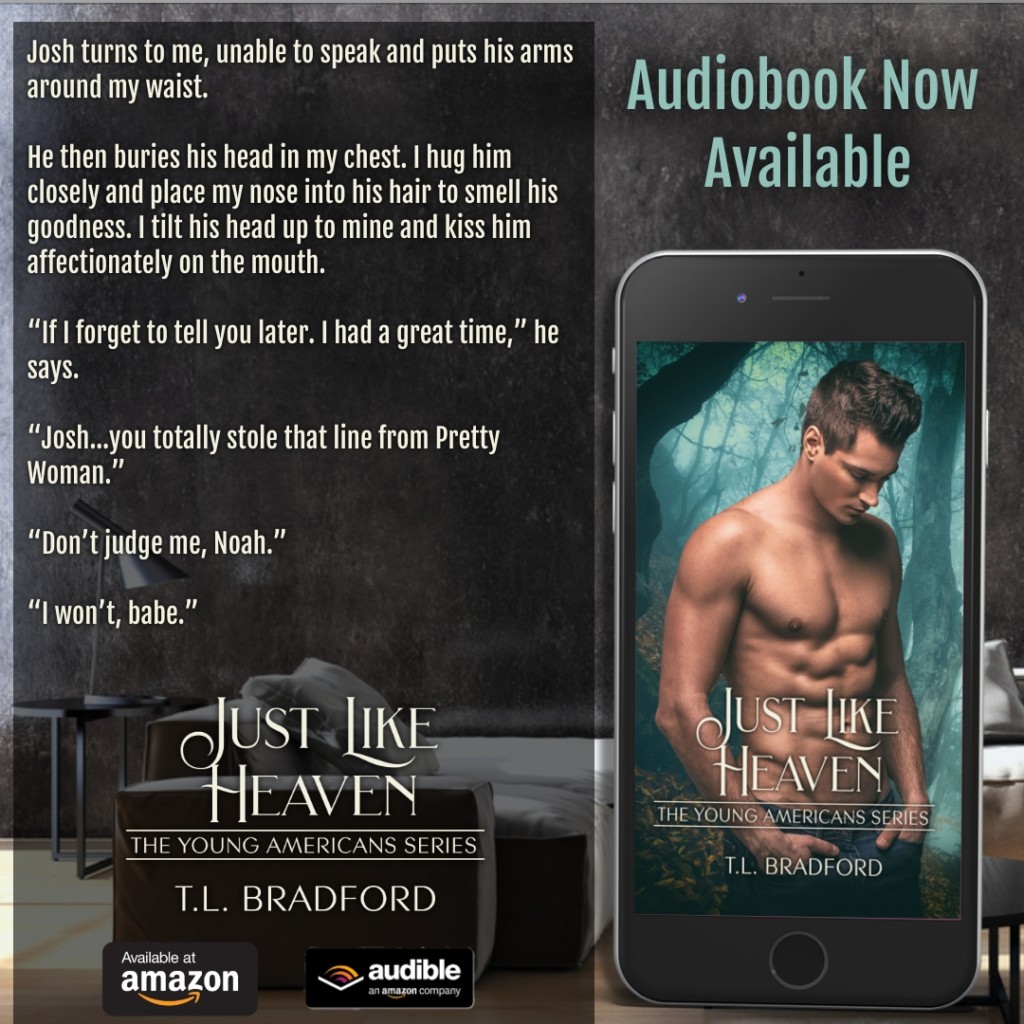 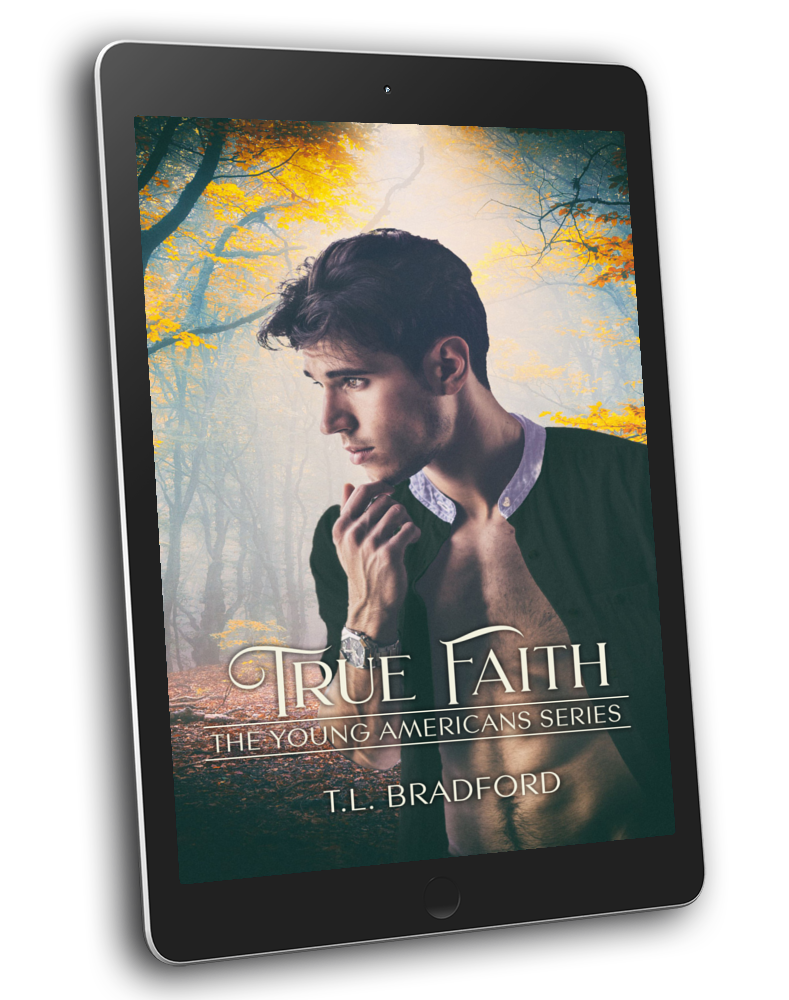 If you were granted just one wish, what would you choose?
Money? Fame? Power? Love?
The world could be your oyster,
if you were willing to take the chance.
But choose wisely, and prepare for the consequences.
Everything has its price.
Can you afford it?
Be careful what you wish for.
And remember, smiling faces tell lies…

Noah & Josh
The entire world witnessed their fight for love.
Obstacles were beaten and won.
They were living their best lives.
Wait?
Is that all? Is that the end?
Seriously, did you really think it would be that easy?
Oh, hell no.
Their story is just beginning.
Josh and Noah are navigating the twists and turns of their newly public relationship…to varying degrees of success.
When they are lured into the trappings of Hollywood’s influence, they end up on the rollercoaster ride of their lives.
Strap on your seatbelt and get ready for a bumpy ride.
You will need to hold on tight.
Temptation, by any measure, is a fickle beast.
And when you are given the world on a silver platter, it’s downright wicked.
Truth, lies, fame, fortune.
All bonds will be tested.
Will the binds that ground them finally break?
(True Faith is a full-length, slow-burn love story. It contains a cast of fully-developed characters that encounter romance, heartache, laughter, and life lessons. It contains adult language, mature themes, and is best enjoyed by those over the age of 18.) 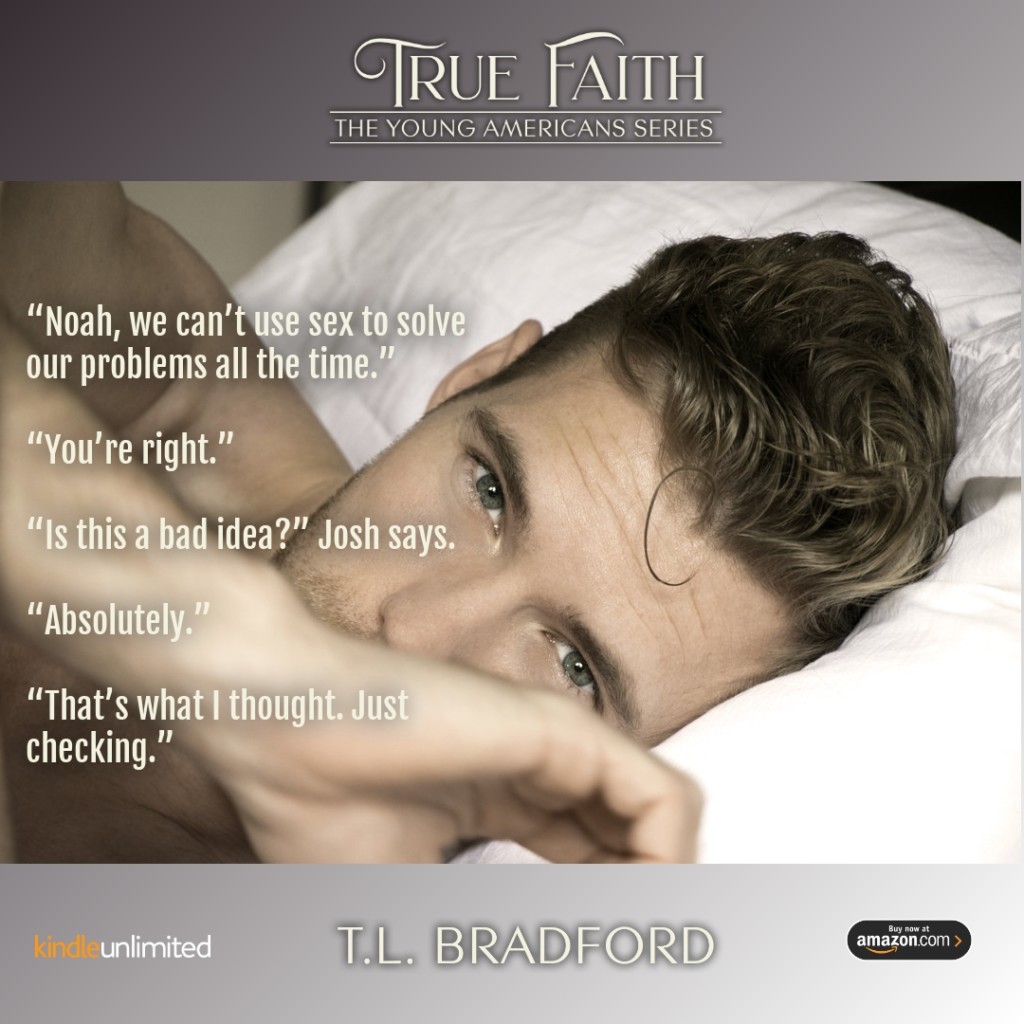 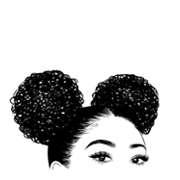 T.L. always hated math, so it was a good thing she had a way with words. Since she was a shy and quirky kid; words were her best friends. She would imagine entire worlds in her head and talk to herself endlessly. Her mother wondered if she was speaking with ghosts for a while.
Her older sister was a voracious reader of trashy romance novels and would pass them down to her after she had finished them. T.L. was the only 10-year-old kid sitting in class reading “The Stud” by Jackie Collins during reading time. Oddly enough, she never got called out on it.
As she grew older, her tastes evolved, but one thing held fast; her undying attachment to love stories. One day out of the blue, she decided to write the love stories she always wanted to read instead of searching for her story. Since then, writing has been a dream fulfilled for her and she could not be happier.
She enjoys writing about love, regardless of gender and is a proud supporter of the LGBTQ community.
T.L. calls the Pacific Northwest her home and enjoys the quiet rural life of her little oceanside home with her playful/crazy husband and their giant dog Noah. 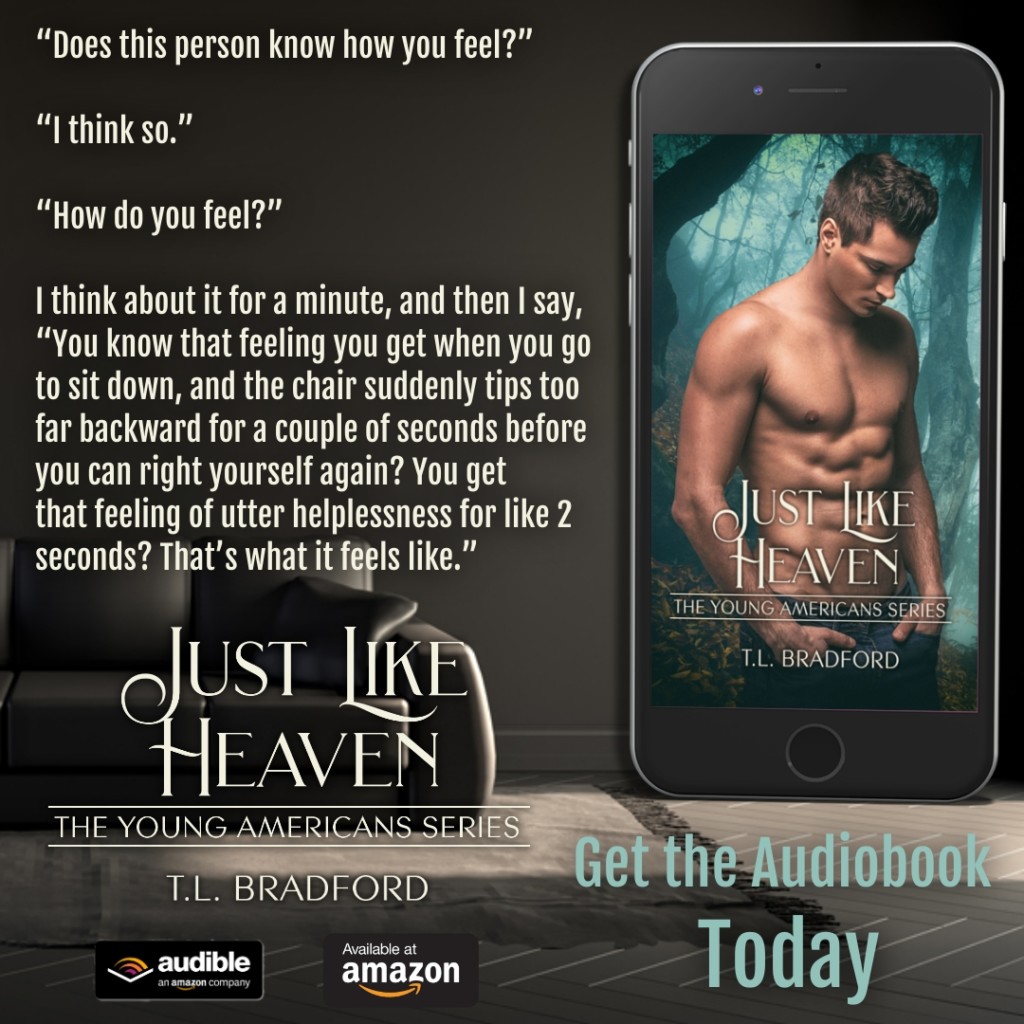 “How much was the Uber Eats? I’ll pay for it. I’m the one that dragged you out here,” Josh says.
“No, don’t worry about it. I got it. Here’s your veggie curry.”
“It smells good.”
“How’s it taste?” Noah asks.
“Alright. It’s not as good as the one we used to go to, but okay.”
“Oh shit, that’s right. Thai Mondays. I forgot about that.”
“I didn’t. I’ll still stop over and grab some when I get a chance,” Josh says.
“Hand me that sriracha sauce. It’s not truly Thai until I’ve burned the roof of my mouth.”
“Here you go. Hey, you remember that place we ate at on Fiji? What was it called, Chanatos?”
“Oh, wait, no it was Chantaro!” Noah remembers.
“Yeah! That’s the place! You had that Massaman curry and doused it in chili sauce?”
“Ugh. Don’t remind me. That chili sauce was hotter than Satan’s asshole, I swear. I paid dearly for that one, both coming and going.”
“Bwhaahhaa!”
“Why are you laughing, Josh? As I recall, you had a life ruining moment as well.”
“Yeah, that was the day I discovered you never take a shart for granted.”
“Let’s toast to that one and never eat there again,” Noah says.
“Never again,” says Josh, finishing the toast.
“We’ve had a lot of crazy firsts,” Noah reminisces.
“Remember our first zip line adventure in Fiji?” asks Josh.
“Yeah. I screamed the entire way down, then passed out.”
“Then there was our first trip to Italy.”
“I was heavily medicated on Dramamine,” Noah says, sipping his beer.
“And who could forget our first ski trip in Colorado?”
“Yeah, I got drunk off brandy to stay warm,” chuckles Noah.
“Why do most of our memorable activities revolve around you being unconscious in some way?” Josh says.
“I can think of one first where I was completely lucid.”
“What’s that?”
“Our first kiss,” Noah says.
“There were like 20 or more people staring at us, I would call that less memorable and more anxiety ridden.”
“No, not that kiss. Our first real kiss.”
“In the gazebo?” asks Josh.
“Yep.” Noah smiles.
“I was so nervous. I thought I was going to swallow my tongue.”
“I’m glad you didn’t. It would have made for an awkward good-night kiss,” Noah jokes.
“I never told you this before, but that day on the bunny slope, when you were all tangled up in your skis and falling over, was the day I realized how much I was in love with you.”
“You’re kidding, right?” A small grin trickles over Noah’s lips.
“No, I was freaking out in the van on the ride back, thinking about how to tell you.”
“That’s why you were so quiet? I thought you were busy thinking about making out with Archer.”
“Like you would’ve noticed! You spent the day practically dating my brothers! I couldn’t pry them off you. Chloe made that super lame excuse to get them out of the house so we could be alone together.”
Noah says, “Yep. I remember. The gazebo was the perfect setting with the Christmas lights and the decorations. Damn, all we needed was a Michael Bublé song and we would’ve had our own Hallmark Christmas romance movie.”
“No, that would be too PG-Rated for us.”
“We were PG. Until we got back to LA, where you corrupted me,” Noah teases.
“I corrupted you? Uh, excuse me. I believe you have that backwards. I remember someone dragging me into the house and then having their wicked way.”
“That time I was the scared one.”
“We’d never gone that far before,” Josh says.
“It felt right. Like we belonged together.” Noah sighs.
“It did. We always fit together, like puzzle pieces.” Josh pauses a moment. “You fit me perfectly our first time. I wasn’t scared or nervous. You were so tender and loving.”
“Josh, I’d have done just about anything to be with you. To have you.”
“I would have let you,” Josh says, repeating that line from so long ago…
“Can I kiss you?” asks Noah.
“Please.”
Noah moves in to taste his lips, gently at first, then nipping his upper lip. “You taste so good.”
“So do you,” says Josh, reluctantly pulling his lips away.
“Again?” breathes Noah, heavily.
“Yes…mmm…how do you always do this to me?” Josh’s eyes roll back in his head in pleasure. “Noah, we can’t use sex to solve our problems all the time.”
“You’re right.”
“Is this a bad idea?” Josh says.
“Absolutely.”
“That’s what I thought. Just checking.”