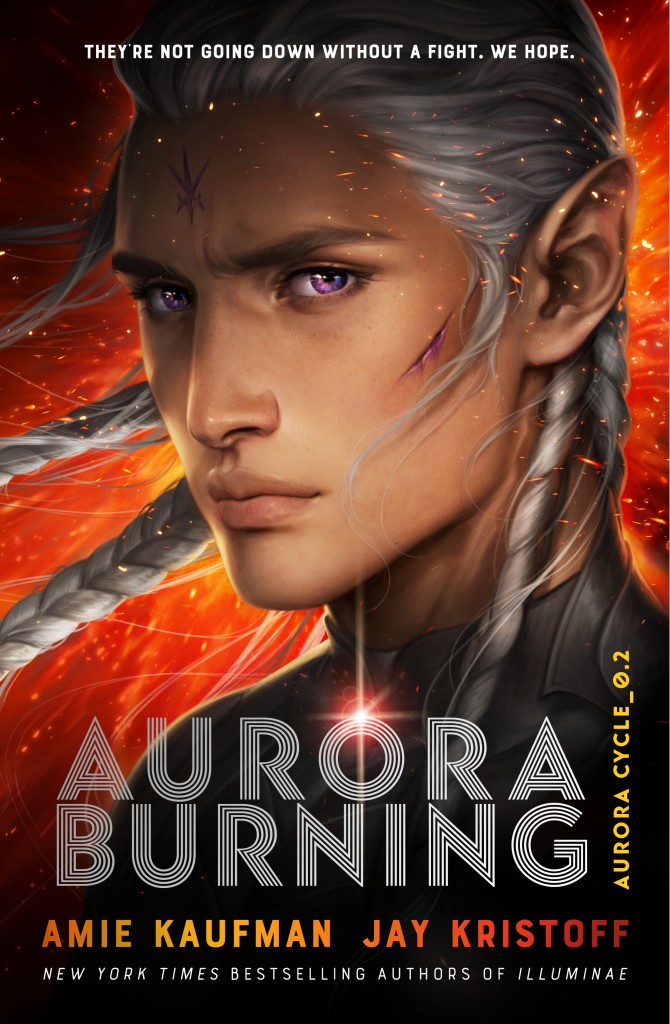 I was definitely looking forward to this book, after I read the first book last year. I was so excited to get started, but when I learned of cliffhangers (just like the previous book) I was unsure if I should start. Eventually on July 18th, 2 months after I got the book, I began reading. I expected I would enjoy it and would be done with it in a wink… instead I struggled and forced myself to at least read 100 pages a day of this book. No matter what.

At times it was good. I really loved the romance between Kal and Aurora and seeing them get closer and closer. There was action and sensation. There was Scarlett’s delightful snark and kick-ass attitude. We learn more about Ra’Haam and the Eshvaren. We see more about Kal’s past and his family (with some not so surprising reveals). We see our team fight to survive. We learn more how Aurora was changed and we also get some Hyperbolic Time Chamber (with pretty much the same time passed as in the HTC). Zila’s backstory was just WOW, poor girl, I can imagine that she turned out the way she did. We get some reveals (that I didn’t expect) about the Jones twins which I absolutely loved and explained quite a bit about things happening. I love when they found the stuff in the safe and what it implied. I liked that time on the planet… though mostly just for Kal and Aurora to get together. I loved all the backstories they made me so so happy. I am glad that each character had some more to tell us, and grow as a character. The cover is amazing, I just love Kal. So swoony! There are some hilarious scenes. I loved the items and each of them finding out what they are for or what they mean. That last chapter and the constant switching of POV was amazingly done and that was one of my favourite parts. OK, not knowing who stays alive and not is frustrating, but I still love the tension, the excitement, seeing them discover things, discover each other.

What I wasn’t a fan of. The plotline in general was just all over the place in my feeling. It all just felt very convenient everything that happened. Not like they came across it by accident or as a normal flow of their adventures. No, it felt a lot like it was all supposed to happen. And I am not a fan. We have a wonderful sexy scene between Kal and Aurora… only to snap back to a chapter full of torture that had me wanting to crawl under a fucking table. And that is how other scenes also happen, it feels quite disjointed at times. Then there is Kal’s sister who I just wished wasn’t in the story, but here she is. sighs She was frustrating and annoying and meh, and sure she did get a tad better but oh my lord. <spoiler>I wasn’t a fan of Kal’s “revelation” which wasn’t a a revelation at all and which I definitely saw coming. OK, I did liked the “reveal” but I absolutely despised how people overreacted about it. It was like watching twitter when someone says something not offensive.. but with how people are these days a whole riot starts because someone was offended somehow. I hated how everyone treated Kal. His father is dead. Doesn’t matter if he is actually alive or not. Dead can have many fucking meanings. How could you kick him out after all he did for every one of you. How can you kick him out when he is clearly not even on his father’s side. Aurora, I guess your love for him wasn’t real after all, because fuck you and your reaction. When he hasn’t seen the dude in like 8-10 years. He didn’t lie. He just omitted things to make his life easier, and good lord, I hated how everyone immediately judged him. This was a part that had me almost throwing the book out of the fucking window. I found it unfair. Same for how Tyler thought when he heard about it. Good LORD people, he is your friend. ARGHHHHH. Also OH WHAT A FUCKING coincidence he heads back to his daddy. I was guessing for the weapon that his girlfriend needs, but good lord was that convenient or not? Not to mention that his daddy was apparently close by? rolls eyes </spoiler> Did we need so much torture? Implied or not? I cannot handle those scenes. I wasn’t a fan of Tyler and Saedii’s POVs and struggled so hard to get through them.

The ending ends on a cliffhanger. But I knew that so I am not even angry at that. However, I will probably not buy the next book, instead just hope that one of my libraries will get it. So far none of them have the series… so this may be a long wait. I do want to finish the series, but I just don’t want to waste another 8-10 euros on a book I may or may NOT like.