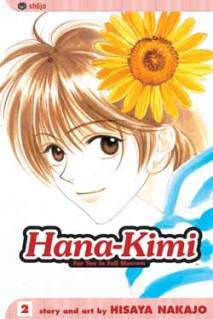 The second volume and we meet Mizuki’s brother, Sano’s rival, and Mizuki’s secret almost comes out to everyone.

I am having so much fun reading this manga series. It is so cute, but very very shoujo. I know, it is shoujo, but sometimes shoujo just goes beyond it. 😛 I still think it is hilarious that Mizuki only thinks that one person knows her secret while in actuality it is 2 (and maybe a couple who are suspicious). It caused some hilarious scenes as Sano, the crush, knows the secret, while Mizuki doesn’t know that. She does some girly things (and later even has to wear girls clothes) and is worried he may find out. Girl, he already knows and he loves it. He doesn’t mind it at all.

Mizuki was such a sweet one in this one. I love how supportive she is for Sano, but also for her other friends. She really makes friends easily and I was delighted with that. She is working hard at school, I love how well she adapted to the school. I know, from books/shows/documentaries, that schools are quite different in Japan and America.

In this one Sano was working hard to get back to jumping. He is training hard, getting over that mental block. Yep, because his body is fine. He is just afraid. I was so rooting for the guy to get back to awesome level. I knew he had it in him, he just needed someone to root for him in a natural (and not pushy) way. Because we saw how the manager did things to Sano and how that totally went against everything.

I was a bit put off by Nakatsu and how he keeps saying he isn’t gay as if it is something bad. Yes, Mizuki is a girl. We know that and 2 others as well. But even if she wasn’t. Being gay is not bad. It may be a bit of a shock to find out you like both girls and boys, I can imagine, but come on dude. Just chill.

Kagurazaka, I wasn’t a fan of him. He just has way too much ego for me, and I didn’t like how he handled Mizuki. I am a bit worried how this plotline will continue. I hope he doesn’t keep popping up at random times to just make stupid remarks about Sano.

How did the guys get sake? Why are they getting drunk so often? I thought the age of drinking (and buying) was 20? So that was a bit weird. Also, if you know you do weird stuff when drinking? Maybe not drink and destroy something you like.

But this was a fun volume with romance, humour, lots of shoujo tropes, and of course sports. I cannot wait to read the next volumes and see what happens next. Will Sano tell Mizuki he knows her secret? Will they start dating? is excited