A starlight welcome to the Blog Tour for Chasing Starlight by Teri Bailey Black! does a happy dance that she is part of the tour Murder, Hollywood, fame, and more~

For today’s post I got an excerpt, a giveaway, and of course book/author information! 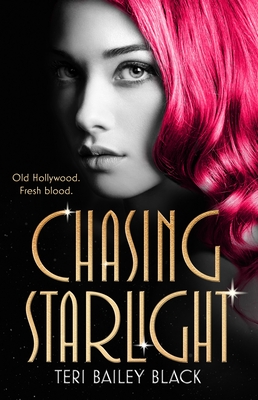 Movies, mansions, and murder in the Golden Age of Hollywood! Teri Bailey Black’s Chasing Starlight is a historical mystery from the award-winning author of the Thriller Award for Best Young Adult Novel.

1938. The Golden Age of Hollywood. Palm trees and movie stars. Film studios pumping out musicals, westerns, and gangster films at a furious pace. Everyone wants to be a star―except society girl and aspiring astronomer Kate Hildebrand, who’d rather study them in the night sky. She’s already famous after a childhood tragedy turned her into a newspaper headline. What she craves is stability.

But when Kate has to move to Hollywood to live with her washed-up silent film star grandfather, she walks into a murder scene and finds herself on the front page again. She suspects one of the young men boarding in her grandfather’s run-down mansion is the killer―maybe even her grandfather. She searches for clues.

Now, Kate must discover the killer while working on the set of a musical―and falling in love. Will her stars align so she can catch the murderer and live the dream in Old Hollywood? Or will she find that she’s just chasing starlight?

Teri Bailey Black grew up near the beach in southern California in a large, quirky family with no television or junk food, but an abundance of books and art supplies. She’s happiest when she’s creating things, whether it’s with words, fabric, or digging in the garden. She makes an amazing chocolate cherry cake—frequently. She and her husband have four children and live in Orange County, California.

Chapter 1
1938 California
Part 2
Aunt Lorna had held up a fox stole, the engagement ring on her left hand sparkling like a block of ice. “What does one wear in South America, do you think?”
“Safari hats, I should guess.” “How ghastly.”
Kate had dropped to the sofa under the window, stretching out her long legs. “What if I despise Hollywood?”
“Oh, darling, how could you possibly despise Hollywood? All those movie stars and pool parties.”
“I doubt my grandfather dines with Cary Grant. His friends will all be ancient.” She’d hesitated before asking, “Can I come back if I hate it?”
Aunt Lorna had given her a sideways look. “You’ve burned that bridge, I’m afraid.” Two weeks ago, her fiancé had found Kate’s list of Seven Reasons for Not Marrying Mr. Norton, and his requirement that Kate not live with them after the wedding had become nonnegotiable. “Besides,” Aunt Lorna said in a gentler tone. “You don’t want to live with him any more than he wants to live with you.”
No, Kate didn’t want to live with Mr. Norton, who insisted on eating in silence to aid his digestion. But she didn’t want to leave home either. “I’m the first girl to ever be president of the astronomy club, and I’m leaving before I even get started. I’m going to miss the yacht club dance next week. And Meg’s birthday party. I just wish you’d waited until I was done with high school to get married.”
“Sadly, wishes don’t pay the butcher.”
“Or the housekeeper,” Hattie muttered, stuffing newspaper into the toes of glittering party shoes.
Uncle Harvey had died two years ago, but Aunt Lorna had never seemed to grasp the concept that continuing to spend lavishly without an income led to an empty bank account. She owed every dress shop in town, and poor Hattie hadn’t been paid in months. Mr. Norton and his gold-mining fortune had come along just in time. They would be married by the ship’s captain, and then spend a month in South America inspecting Mr. Norton’s gold mines—his idea of a romantic honeymoon—before returning to Aunt Lorna’s house in San Francisco. While they were away, the house would be gutted and remodeled, Kate’s bedroom turned into an office for Mr. Norton.
“Hattie, I want all the jewelry in my cosmetic case so I can keep it close on the ship,” Aunt Lorna said, holding up a strand of pearls. “And don’t forget about the movers tomorrow, putting everything in storage while the house is remodeled. And Kate’s car—”
“Yes, ma’am, picked up by the new owners.” Tactful Hattie. She knew Kate’s car was being repossessed by the bank—one debt Mr. Norton refused to pay.
Her darling little roadster gone. Her bedroom demolished. Even Aunt Lorna—the closest thing she’d had to a mother in four years—sailing away after a quick kiss at the train station that morning.
This was Kate’s new life. And no one to greet her.