A magical welcome to the Blog Tour for Girl with Three Eyes by Priya Ardis!

For today’s Blog Tour I got a ton of things. For instance you can watch a book trailer, but I also got an excerpt, and then there is book/author information. Of course, I also cannot forget the giveaway located at the bottom of the post (open INT, so go go).

The book is coming out September 22nd! Just a few weeks left! 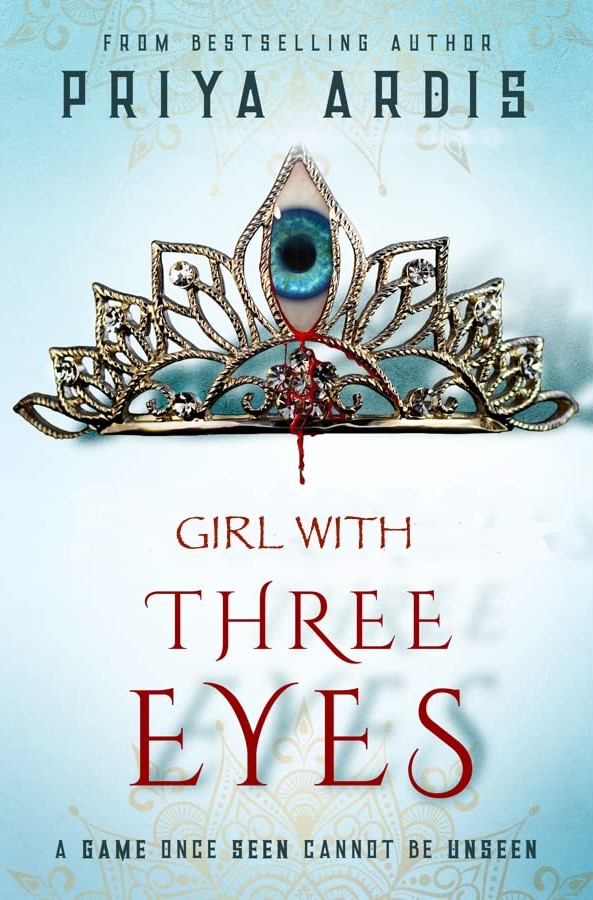 She would hate her third eye less if it actually gave her special powers. When her secret is threatened, she may be the only one who can save the kingdom.
Sixteen-year-old Kira puts on a show about having empathic abilities, but she miraculously wakes a highborn boy from a coma after a near-fatal accident on mountainous slopes. When his father threatens to expose her “magic” to the queen unless she attends the kingdom’s most elite academy as a bodyguard.
Soon, she’s immersed in a strange new life—one of being a simple student trying out for the school’s skyboarding team. Her fake life becomes the life she’s always wanted, but Kira cannot escape who she truly is. And as a sinister foe lurks closer than she suspects…
Will she risk her freedom to develop the vision to unmask a killer before the crown falls?
Girl with Three Eyes is a young adult fantasy series. If you like strong female protagonists, futuristic fairy tales, and epic tournaments, then you’ll love Priya Ardis’s heart-racing adventure.

Priya Ardis writes Blood&Treasure fantasy romances which include coming of age, bad boys, globe-trotting, and a spoonful of sassy banter.
She loves books of all kinds–but especially the ones that ensnare you and let your chai go cold. Her novels come from a childhood of playing too much She-Ra and watching too much Spock. She started her first book at sixteen, writing in notebooks on long train rides during a hot summer vacation. Her favorite Arthurian is the Lady of Shalott by Lord Tennyson.
What does she like to read? Books with fantasy and magic with a cool heroine that’s really just the girl/boy next door. Books with all the feels. And, hello, Mr. Darcy anyone?

Eventually we stopped at a large marketplace alive with hundreds of tents. The Rainbow Bazaar lived up to its name. In a row of open booths, colorful fabrics to mouthwatering food to gleaming tech offered every imaginable good.
I wanted to linger at every booth, but Trace didn’t give me room to breathe as he rushed me through the bazaar using two attendants and two guards (all goons) to nudge me along. He picked out clothes here and there without bothering to ask for my opinion and only a quick once-over to determine my size. In a large bookshop, as I loitered, inhaling the magical spell of rows upon rows of towering books, he piled one attendant with a flat-screen handheld and bags of books. The books surprised me. He’d put in storybooks and not just school. Did Trace actually like reading? Impossible. He didn’t seem the type.
An hour or so passed in Trace’s whirlwind shopping spree and soon the cacophony of colors and sounds began to overwhelm me. A tingling on my forehead caused me to stop completely. I resisted another nudge from Trace’s goons and touched my forehead. Underneath the headband, my skin had become bumpy and sore. The Eye usually opened when I became angry, sad or overset, but this was different. I glanced around and stopped upon spotting a small shop hidden between two big, colorful ones. Not knowing exactly why, I walked to it.
“Kira,” Trace called sharply. He pointed to a kiosk ahead. “We still have to get you shoes. Yours look like they should be walking to the trash, not walking a person.”
I ignored him and went to the shop. Beautiful scarves and fabrics hung from tent poles, taking up every bit of space in the square booth. I picked up a purple linen headband. My fingers skimmed over the softness of its cotton and I put it to my cheek. The fabric caressed my skin, whispering its sweetness.
An old woman with braided hair came out of the shadows. “Beautiful choice, miss. I’ll make you a good deal.”
“Just get it.” Trace stomped up behind me with heavy footsteps.
I put the headband down. “You haven’t asked how much it is.”
“I don’t need to ask,” he condescended. Trace held out his wrist to the old woman.
I shook my head at his smirking face. “Do you always act like this?”
“Whatever.” Trace’s hand dropped. “Your old headband looks better anyway. Let’s get the shoes.”
Was that a compliment? I touched my headband and stared at the shop’s small mirror. I’d worn my mother’s one for good luck. They provided so much functionality that I sometimes forgot their simple beauty. As I turned to leave, the old woman reached out to take back the purple headband and our hands brushed.
Her eyelids fluttered. She dropped the headband. Then her eyes glazed over, her pupils becoming pinpoints, as if she were looking either far away or backwards. She intoned, “Don’t be fooled, dear. Danger lurks. The tiger shall come free. Use the Eye or die.” The old woman raised a hand and pointed at Trace. “You must protect her.”