A happy and adventurous welcome to the Blog Tour for Good For Nothings by Danielle Banas!! I am just so excited to be part of the tour, I was wishing and crossing my fingers so hard when I signed up. And here we are and I am still dancing. 🙂

For today’s tour I got an excerpt, a giveaway, and of course book/author information.

Are you ready for adventure? Let’s get going then~ 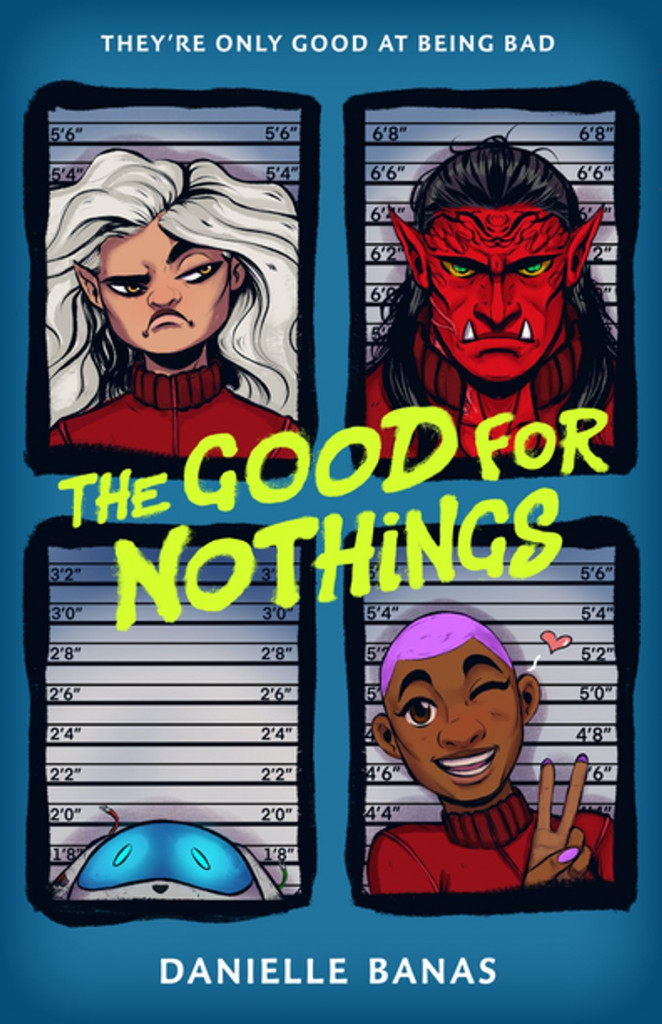 They’re only good at being bad.
Cora Saros is just trying her best to join the family business of theft and intergalactic smuggling. Unfortunately, she’s a total disaster.
After landing herself in prison following an attempted heist gone very wrong, she strikes a bargain with the prison warden: He’ll expunge her record if she brings back a long-lost treasure rumored to grant immortality.
Cora is skeptical, but with no other way out of prison (and back in her family’s good graces), she has no choice but to assemble a crew from her collection of misfit cellmates—a disgraced warrior from an alien planet; a cocky pirate who claims to have the largest ship in the galaxy; and a glitch-prone robot with a penchant for baking—and take off after the fabled prize.
But the ragtag group soon discovers that not only is the too-good-to-be-true treasure very real, but they’re also not the only crew on the hunt for it. And it’s definitely a prize worth killing for.
Whip-smart and utterly charming, this irreverent sci-fi adventure is perfect for fans of Guardians of the Galaxy, The Lunar Chronicles, and Firefly.

Danielle Banas is the author of THE SUPERVILLAIN AND ME and THE GOOD FOR NOTHINGS. She earned a degree in communication from Robert Morris University, where she spent slightly too much time daydreaming about new characters instead of paying attention in class. When she isn’t writing, Danielle can be found loudly singing show tunes, spouting off Disney World trivia, and snuggling with her puppy. She lives in her hometown of Pittsburgh, Pennsylvania.

“Oh, goody. New friends,” said the same high voice from before. It belonged to a girl about my age, Earthan maybe, although it was tough to tell in the dim light. She had short purple hair buzzed nearly to her scalp, and the cheery grin she gave us practically made her dark skin glow.

I didn’t trust her. Anyone who looked that happy was either a liar or lacking sanity. If she attacked, I knew a quick shot with Elio’s blaster would put her down. I reached for it in his jacket, the fabric caked with grime from the queen’s crypt, but found his pockets disappointingly empty.

“Oh, they kept your stuff,” the girl said. “They always do. You had a couple coins in your pocket, but I took those. Finders keepers. I also took the zipper on your sweater. It looks like it’s made of Europium. Is it? I’ve been itching to touch some for years but never managed it and—”

“Whoa! Can you shut up for a second?” In addition to all the other aches in my body, now my head was pounding. And look at that—my zipper really was missing.

A sudden noise came from the opposite corner of the room, almost like a laugh, but I couldn’t see far enough into the shadows to pick out a body. Maybe I made it up, desperate to talk to anyone other than the girl, who had scooted closer and was talking again.

“My mom calls me Magpie. I’m always swiping things for myself, but it’s actually a very misleading name, because according to research, magpies are positively terriﬁed of shiny objects. And I very much like them. Shiny objects, that is.” She ran a hand over her scalp before offering to shake. “I’m Wren, by the way. Also known as your welcoming committee.”

I just stared at her. The aura around her head shimmered a soft periwinkle blue. Far too calm for being stuck in this freezing, windowless room. She was most deﬁnitely out of her mind.

Of the two of us, Elio was the only one who tried to be polite. He pinched Wren’s hand between two of his ﬁngers in a halfhearted shake. “I’m Elio. This is Cora.”

“Nice to meet you. What are you in for?”

Elio frowned. “I’m not sure what you mean.”

Wren grinned. Again. “Grand theft auto? Homicide? No, not homicide. You don’t seem like a murderer. She does though.” She nodded to me, and I swore I heard another chuckle from the shadows.

Still not seeing anything, I pulled my eyes away from the corner. “We didn’t do anything,” I said. “Where are we?”

Finally, ﬁnally Wren’s grin faded. “They didn’t tell you when they brought you in?”

“We weren’t conscious when they brought us in,” Elio said, but my ears were ringing. At last everything clicked into place.
If we ever got out of here, Evelina would kill us both: we’d broken a criminal’s only rule.
We got caught.

Wren had the grace to look apologetic as she nodded to the door—a block of steel with no handle and no window. Just a faceless slab of metal.

“You’re on Andilly. In the Ironside maximum security prison.”