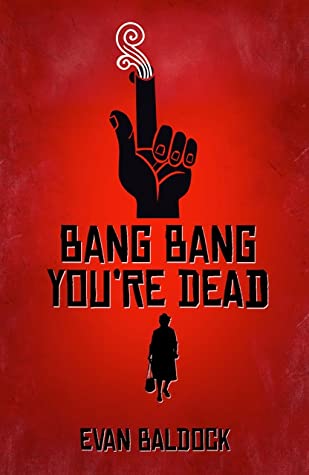 I received this book from the publisher for the Blog Tour in exchange of an honest review.

I was so hyped for this book which is about an older woman taking matters in her own hands when she finds a gun. In my pre-review (for my blog tour, as I just couldn’t read this book in one day I had before my tour (which was a surprise)) I said I was enjoying the book, and I can tell you now, I enjoyed the rest of the 80% of the book as well! OK, the ending was a bit wobbly, but in overall I really really enjoyed this book and Gloria was kick-ass.

I loved how much this felt like Death Note. A series (anime/manga, not the horrendous terrible emo adaptation for live action) I just love to bits. In that one a person, named Light, gets a notebook that allows him to murder people. At first he goes for the bad guys (by watching newsreports etc.), later he turns to much darker things. Along with that we see the police/L trying to find Light and get justice. Though I always thought that L had more reasons than to catch Light. In this book our awesome girl Gloria finds a gun, uses it accidentally at first, but then decides to clean up people who are bad/doing bad things. Along the way we see how she turns more and more into a killer and even starts to plan things. Thankfully, she doesn’t really turn to the bad side or go powermad just like Light did (though at one point I did think she would given what happened). She stays mostly human which made me happy. I still don’t fully agree with what she did, I would never say OK to murder, but I can understand why she went the route she took. Just like we see many times in the book, a lot of people are supporting the vigilante, a lot of them may not be OK with the methods used, but they are happy that they can live more safely at least.

Along with Gloria’s POV we also see the police’s POV and see how they are struggling, trying to find out who it is. While I was more interested in Gloria’s POV, I do appreciate that the police POV is added as it gave some more insight in things.

We also get a short POV of one of the big criminals who owned the gun.

I have to say I was a bit hesitant about Jules and how she acted. I kept thinking she would double cross Gloria. I was hoping she was a real friend, someone to trust, but I also know that she would benefit greatly if she told anyone all that she knows.

I liked how Gloria changed through the story but still remained pretty human in it all. I did have a laugh at how she said the first 4 people she shot were accidental/not on purpose. Um, I would believe the first two people yes, but the next? I am sorry, Gloria, no no, I don’t believe that given what you did.

The first 4 murders were pretty much unplanned, but the next ones got increasingly organised and it was pretty interesting to see how Gloria planned so much. She got changes of clothes, did something to her hair, and other things. She knew how to check her gun and how it worked. She made sure to not leave any traces. She planned excuses and alibis, she checked the CCTV stuff, and so on. The one with her family and drugsdealers was the biggest planning of them all. I was amazed though that throughout the entire book she was a great shooter despite never seemingly having shot anything. I know this may sound odd, but in other books and movies when people shoot for the first time it is generally not that easy, and even later it takes practice (and looking at things like the Olympics were people have to ski/shoot they don’t always shoot dead centre).

But then around 75% we find out about the letter sender.. and sorry I wasn’t a too big fan of that part. I would have rather seen a whole different turn to the events. The story is already over the top, and now it just went too far over the top in my opinion. And it turned the book into another direction.. so while the last 25% had some good stuff, it wasn’t the best part of the book for me. Also holy freak at Gloria’s solution to the problem. OK. steps away from Gloria I did have a giggle at the reactions of Sean and Jules. The ending felt a bit weird to me, I am happy though, so a bit mixed feelings. On the one hand, Yes, on the other hand, wait what?

But in overall this was a great book and I definitely enjoyed reading it. Thank you to the publisher for giving me the opportunity to read this one. I would recommend it to all. Gloria is a great character, but be sure to not mess with her. This woman can shoot! The story was interesting and exciting. It may get a bit gory at times, so be warned.