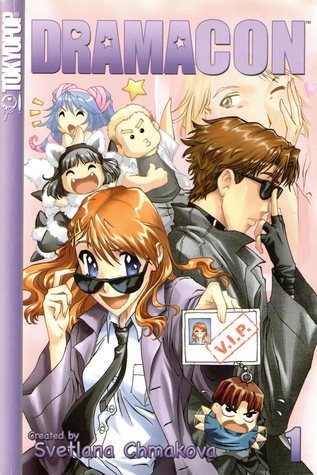 I received the omnibus from Netgalley in exchange of an honest review. This in the end is the only volume I could read of this comic/graphic novel. It just wasn’t for me.

I was very excited about the omnibus, I had read some parts of the comic already but never the whole thing so I wanted to check it out. However, after just one volume I had enough. It also definitely didn’t help that the characters were mostly eh (with the exception of Matt’s friends).

There was one thing I absolutely loved and that was the con stuff. I have been to a few cons and had plenty of fun so I could recognise several things in this one. I loved wandering through the dealerroom, check out people’s work in the art alley, dance on music, check out karaoke (too shy to actually participate though), eat all the food (though that was one of the problems with the cons here… the food or the lack thereof), meet friends, maybe do some casual or full cosplay. Going home with all your fun new things and unpacking them. Eating all the pocky. Yum.

The art, while over the top and strange I didn’t mind it that much. There were definitely some good moments in it.

Derek was an ass. For real. You can talk to who you want, that is totally OK, but if you are clearly actively flirting and making eyes at their bodies? Then you are just being a dick and come on you are in a relationship. You should know that this isn’t the kind of thing to do. Stop being so rude and mean towards your girlfriend, do you know how it feels for her that you do these things?
But OH BOY at the part of the drunk argument. Warning for attempted rape. I just wanted to punch him. Bah, horrible person. I feel sorry for his next girlfriend, I hope someone warns them.
Really, Derek reminded me of one of my exes in the flirting stuff and being a dick about stuff.

BUT, I also wasn’t a fan of Christie. She is all preaching to her boyfriend (and for the first part of the book I fully agreed with her), but along the way she almost kisses a guy and then later kisses him fully (OK, he started it but she clearly didn’t mind it for most of the kiss). I am sorry, but flirting is one thing, but kissing? NO. I am sure people will get angry at me, I don’t care. She is not even sorry for the fact she did it and then comes with the whole thing of But you flirt. Yes, that is bad, but GIRL, you kissed a dude. You are clearly also flirting with him. Come on. Stop acting all holy.
Also, I didn’t get why she was still with him as it was clear this wasn’t the first time he was doing this crap…
I also still don’t know how old she is, given how she acts a lot of the time I would say 13? But if I look up 11th grade + American + age in Google it says she should be around 16…

But I did like seeing her discover the con, I know how my first con felt, it was pretty scary, but quite soon you enjoy it and find stuff to like. I loved seeing her meet with a favourite writer and get some fun moments with that there, I hope she later meets her again. I was so happy when she found her place and started enjoying the con.

Plus, urgh at instalove. That is one of those tropes I just could do without in my life. While I did see the attraction somewhere between Matt and Christie… it just went WAY too fast for me. It took me a bit to see that Matt meant well, that he was just hiding behind rude remarks.

The ending was OK-ish, I am glad that the sister did that, because otherwise it will never happen. I am kind of curious how they will make it work and if she actually calls him.

But yeah, I am never going to find out if she does… because again, this was just not for me. 2 stars for the fun con stuff, for seeing a girl discover cons, for some other moments. But that is it.

One thought on “Review for Dramacon Vol.1”