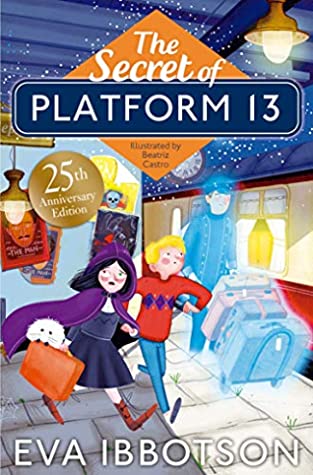 A fun and magical story but I didn’t like the whole mistaken identity stuff and how that was handled.

I was curious about this book, also because I just LOVED the cover. The blurb also sounds interesting and so I picked it up, along with book 2 which I plan to read this week (as I didn’t have time to do so during my vacation).

Let’s start with the good: I do love the idea of a magical island. Of a magical entrance to that island. That is accessible once every x years and that everyone can get into, no matter what. If you know about it you are allowed to come. Of magic and ghosts that just wander around us. Odge was adorable and a fun character and one of the few who actually was questioning things and wondering if maybe it wasn’t someone else. I loved her different eyes, I loved how sweet she was. There was Nanny and her plotline just had me sad for her and for how it would end. Because we know how it ends. I loved seeing all the magical creatures. The mistmakers were just ADORABLE and I would love one. The illustrations were fab (as I thought it would be). The story was fun written and in a way that just made you WANT to read and read and read and read.

I am deducing one star for the ridiculous and stupidly written mistaken identity stuff. It would have been fun if it didn’t TAKE THE WHOLE BOOK. Now it was blatantly obvious to the reader that Ben was the prince (I don’t see this as a spoiler, especially since he is on the cover and not to mention all the other things) and that Raymond was just Dudley only less fat and with more money. Come on. Raymond LOOKS like his mother. Raymond is scared of magic. Raymond doesn’t care about magic. Ben can whistle. Ben can take care of magical creatures. Ben doesn’t look like Mrs Trottle. Ben has NO parents. Ben can see ghosts. Ben has memories. But does anyone actually look? No. They just go by the, well she stole a boy and then don’t give a hoot about the rest. It was just annoying and frustrating and definitely spoiled my reading experience.

So there is a lot to love.. if only the mistaken identity was done better this would have been 5+. But for now it is 4 stars.