A happy welcome to the Book Blitz for Love is a Battlefield by Whitney Dineen! This book sounds hilarious and cute~

For today’s post I got an excerpt (I am rooting for her), book/author information, and a giveaway (INT). 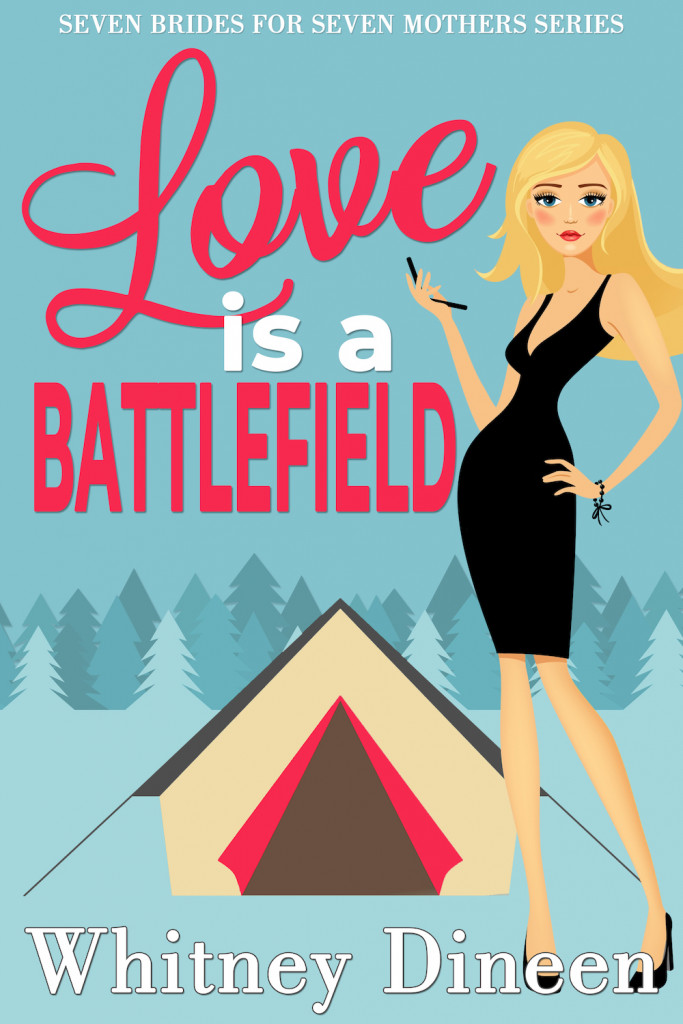 Who doesn’t want their mom to play Cupid?
Addison Cooper had planned on an all-expense paid vacation to the Cayman Islands to celebrate her most recent business success. Instead, she’s trekking to the outback of Oregon to help a friend of her mother’s.
Reclusive novelist Brogan Cavanaugh’s new thriller just hit the New York Times Best Seller list. To reward himself, he was planning to spend the summer at his family’s fishing cabin until his mom unexpectedly calls in a favor.
Even though moms Libby and Ruby have been best friends since they were college roommates, Addison and Brogan have barely spent time in each other’s company. And when they did, things didn’t go well.
How will they react when they start to suspect their interfering mothers are setting them up?
Find out in this deliciously funny rom-com about mothers who really do know best and the children who don’t know they need them.

Whitney loves to laugh, play with her kids, bake, and eat french fries — not always in that order.
Whitney is a multi-award-winning author of romcoms, non-fiction humor, and middle reader fiction. Basically, she writes whatever the voices in her head tell her to.
She lives in the beautiful Pacific Northwest with her husband, Jimmy, where they raise children, chickens, and organic vegetables.
Gold Medal winner at the International Readers’ Favorite Awards, 2017.
Silver medal winner at the International Readers’ Favorite Awards, 2015, 2016.
Finalist RONE Awards, 2016.
Finalist at the IRFA 2016, 2017.
Finalist at the Book Excellence Awards, 2017
Finalist Top Shelf Indie Book Awards, 2017

Something is definitely up.
Brogan interrupts his mom, “Where are you thinking about setting up a glamping site?”
“We have those old cabins up near the fishing cabin. I thought that would be the ideal place,” she tells him.
He visibly jolts. “No one has stayed in those in years. At this point they’re probably more shack than cabin.”
“That’s why I want to do something with them now. I thought Addie could check them out and get a feel for what we’d need to do to make them worthy of the glamping title.”
She’s got to be kidding! Before I can express my shock, Brogan lets out a great big boisterous that’s-the-most-ridiculous- thing-I’ve-ever-heard-of laugh. He sounds borderline hysterical.
“What are you laughing at?” I demand.
‘I just can’t see you being interested in a project like this, that’s all.”
“I’ve decorated resorts that specialize in all kinds of different things.”
“Don’t be rude, Brogan,” Ruby admonishes her son. “Addison is an accomplished young woman known the world over for her innovative designs.”
“I’m sure,” he says. “But she’s known for fancy five-star designs, not something like this.”
“Are you saying I can’t do it?” More than anything this gets my dander up. I am first and foremost a professional. “How about a little wager?” I ask him.
“I’m game if you are. I bet you can’t spend a week up there without running home to New York.”
I never said anything about staying up there. But instead of pointing that out, I knowingly and ill-advisedly declare, “I could do that in my sleep. In fact,” —and here’s where I totally lose my mind— “I raise your week to a month. What do you think about that?”