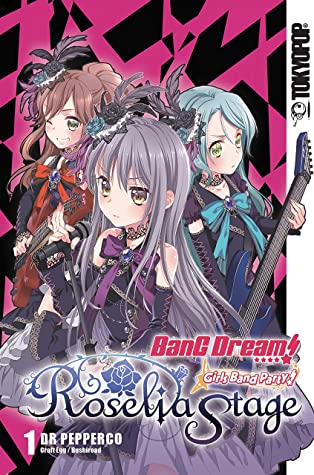 I received this manga in exchange of an honest review.

While I gave up on playing the Bang Dream Game, I am still a giant fan of Roselia. They are one of my favourite bands in the franchise. So I was hyped when I saw this manga appear on Netgalley.

This one begins with Roselia not yet being a band. We see various band members at the start (and later all of them are together at the same place, which was nicely done) and I was eager to see them get together again, form the band. Get Roselia to be known. So I was delighted with each step on the way. Though I was frustrated to see how Yukina and Sayo were bossy about things, just be happy that people want to be part of your band. They play awesome, so really, what is the problem? Just because they may want to take it further than just playing for fun, that isn’t a bad thing.

We see Yukina’s reasons for starting a band, and my heart broke again for her. I can imagine she is so dedicated to her music, to showing the world it. Also for her father’s sake. Though I was looking forward to the Yukina who isn’t so stiff, so serious, so strict, so… well, cold. I want her to have fun with music again. To make friends. To have a good time. To be more happy.

I had such a laugh at how hard Ako was trying to get in the band. Feeling sad about it, but then going back hard to get into the band. This girl is not giving up. While she isn’t the type of girl I would want near me in real life (and I remember in the anime she was a bit too much), I do like her in the manga (probably because you can’t hear her then).

I loved Rinko and seeing her become more brave. I was looking forward to see her be with the band.

I loved seeing the band together and play their first song together. I guess I will be listening to Black Shout soon again, it is such an amazing song, full of power and awesomeness.

The art was nice… but the expressions were at times too much for me. It felt more like I was reading horror or crime instead of a story about girls forming a band and kicking some serious ass.

All in all, I had fun reading this one, I loved seeing the characters again, but now in manga form. I can’t wait for the next volume to come out.