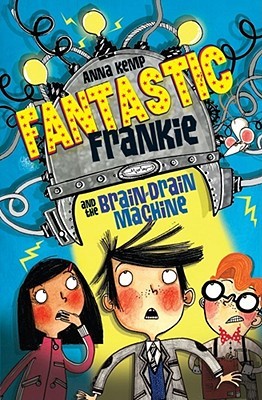 A boy gets send to a boarding school, but it isn’t such a nice and friendly place.

I read this one in Dutch but will write the review in English. I will be using the Dutch names however since I have no clue about the English ones. So get used to Frankie, Claus, Damian, Anika, Josefine.

A boy with bad/evil parents is nothing new, just like being send to a boarding school with an evil headmaster is nothing new. HOWEVER, I just cannot stop reading books with those themes. Each time there is something different. Something new. Something exciting. And I had so much fun reading this one and seeing the school and the evil headmaster Claus Oger. See what his plans were and what was up with the school. Because there is a lot going on at the school. Constant tests (which brought something humorous as Anika kept falling asleep each time she heard the word test), no windows, no fun, peas in fish oil (OMG I just felt like puking when I read that), and more. It is a grim and dark place. Not something for kids.

I loved our MC, Frankie. He was a great MC and despite not being smart like Damian, he thought up some amazing plans and his imagination worked overtime thinking of ways to get through things. He was just what the school needed.

We also got someone who takes care of Frankie when he was still at home, Josefine. A French woman who has had some amazing adventures of her own and loves telling them to Frankie. She was such a wonderful amazing fabulous character and I loved her. It was fantastic how much she cared for Frankie and made sure he at least had some safe space when he still lived at home. She listened closely to him, and was more of a mom to him than his actual mom. We don’t see much of her throughout the book, but later on she is back and she brought her dog with her.

I quickly had a suspicion who Claus Oger was when we saw a certain thing in his office and when we got some more hints later on. I did have a bit of a laugh that it took our characters a bit longer to figure out, but when they did we found out many more other things, including something about Josefine’s missing husband (and I immediately knew what happened to him).
I loved the ending to the book and what the kids (and Josefine) had planned, it was a fantastic plan and it worked out so well. I am happy to see how it ended. Not just for our main characters, but for everyone.

Claus Oger was a fantastic villain though, very well written. He was evil, vile, and the kind of person you don’t want near your kids.

Frankie’s parents, oh boy, some people shouldn’t have gotten kids. 😐 They were terrible people and I am glad they got what they deserved in the end.

The Dutch translation was really well done, sometimes it is a bit hit/miss but I really liked the translation it worked out well with everything.

I would highly recommend this one to all.