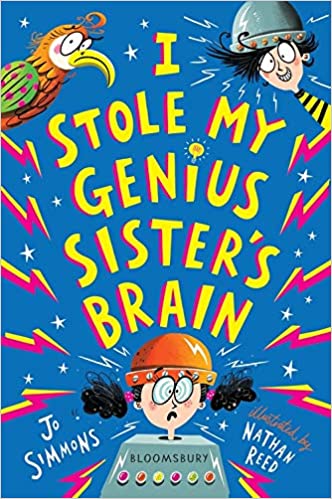 A delightful book about a creative boy who wants to get his genius sister’s brain. Full of humour.

So far I am just LOVING Jo Simmons books. It started with I Swapped My Brother On The Internet and then My Parents Cancelled My Birthday. And now there is this book, I was so happy and I was eager to see what would happen. Because that title sure promises something.

Meet Keith, an 11-year old boy who is not so much of a genius, not like his sister anyway, but he has some other things going on. He loves experimenting. He loves inventing. He wants to go to an Invention Fair in Paris. He loves having fun, playing, and just having a good life. I liked Keith from the start. OK, his inventions are often just disgusting as freak (come on a toenail in an old sausage… EWWW), but I love how he keeps trying. And I could definitely understand how he wanted to take over his sister’s brain. Though he mostly just wants to do it so he gets enough money for his trip to Paris as his parents are refusing constantly.

His sister, Min (Minerva), is a supergenius. She knows everything, multiple languages, Chinese opera (which to Keith sounds like someone is wailing), and more. Her parents drag her all over the place and at first I thought Min was OK with that.. but we do find out a bit more about Min and I started really liking her. I actually felt sorry for her.

I had a big laugh how he tried to get his sister’s brain. From inventions to hypnosis. I had expected a bit more of it though, since it is the title, but in the end it was just a small piece of the book.

Because Keith goes for another route and it was a route that was just the best. It was totally Keith. And I love how he owned it. How he didn’t mind that people laughed, instead made them laugh. I loved the fans, I loved the bunnies (sneezing which explains the bunnies on the back of the cover with tissues).

Big big plus points to Keith Sr. (yes, all the guys in Keith’s family are called Keith). He and his parrot were just topnotch characters!

I do hope the parents chill a bit more. It was just not fun how they treated Keith and his interests. How they focused 100% on Min.. but when their other kid wants something they treat him like poop and ignore him. It seems that at the end they did learn something, but I wonder if it is enough. I am crossing my fingers and say yes, yes, they learned and after summer Min can be a normal (apparently) 13-14 year old without the constant pressure of studying, quizzes, and other things. Even a genius needs to play and relax.

The book also has plenty of fun and hilarious illustrations. Can I just say that I love the hair and how it was drawn? It had a life of its own.

All in all, with the exception of the parents this was a hilarious, laugh out loud, invention-filled, book about siblings. I loved it! I would recommend it.