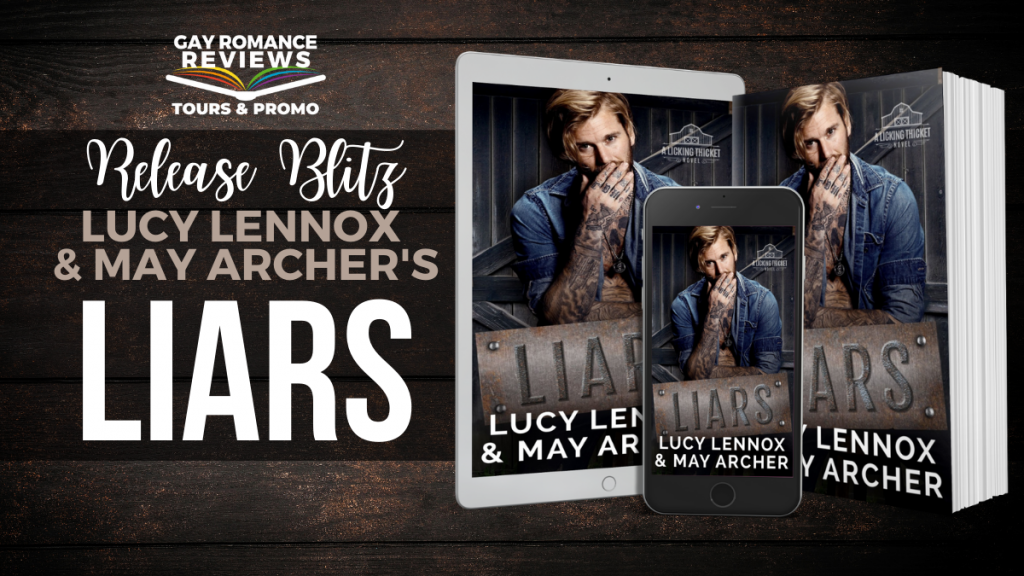 throws glitter A party welcome to the Release Day for Liars by Lucy Lennox + May Archer, this is the second book in A Licking Thicket series. does a very happy dance

To celebrate I got some fun things for you. An excerpt, book/author information, teasers, and a giveaway!

A big big congratulations to the authors on their book releasing, I hope you both have a wonderful day! 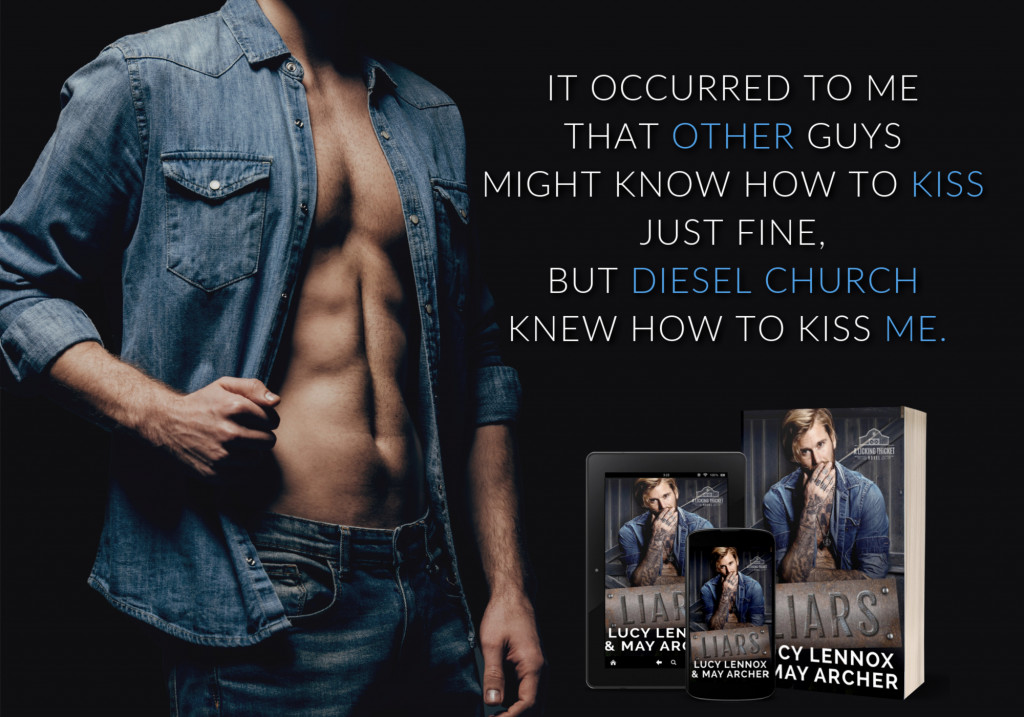 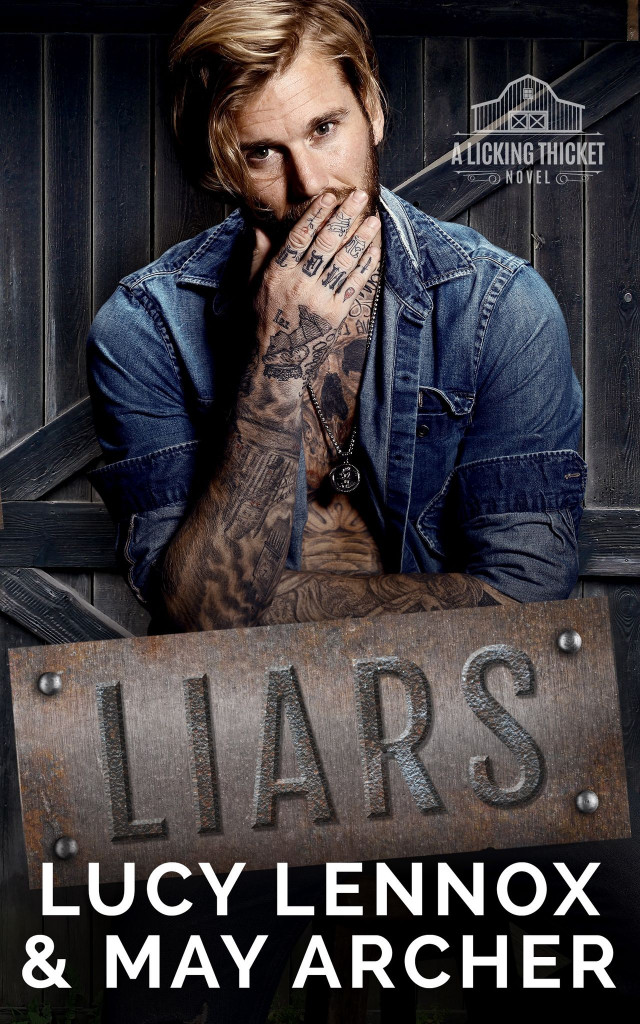 Parrish Partridge’s True Facts:
There’s nothing hotter than a tall, gruff, bewildered, tattooed mountain of a man cuddling a sweet, orphaned baby, so you can tell yourself that you’ll resist him…
But that’s a lie.
And when that man asks you to do him a favor and pretend to be his very temporary, very fake fiance to help him get custody of that adorable baby, you can pretend you know better than to say yes…
But that’s a lie, too.
And when you actually get to know your kind, strong, pullet-loving prince of a fiance, and all his crazy, lovable, meddling neighbors, you can tell yourself you’re not really falling for Diesel Church and the town of Licking Thicket…
But that might be the biggest lie of all. 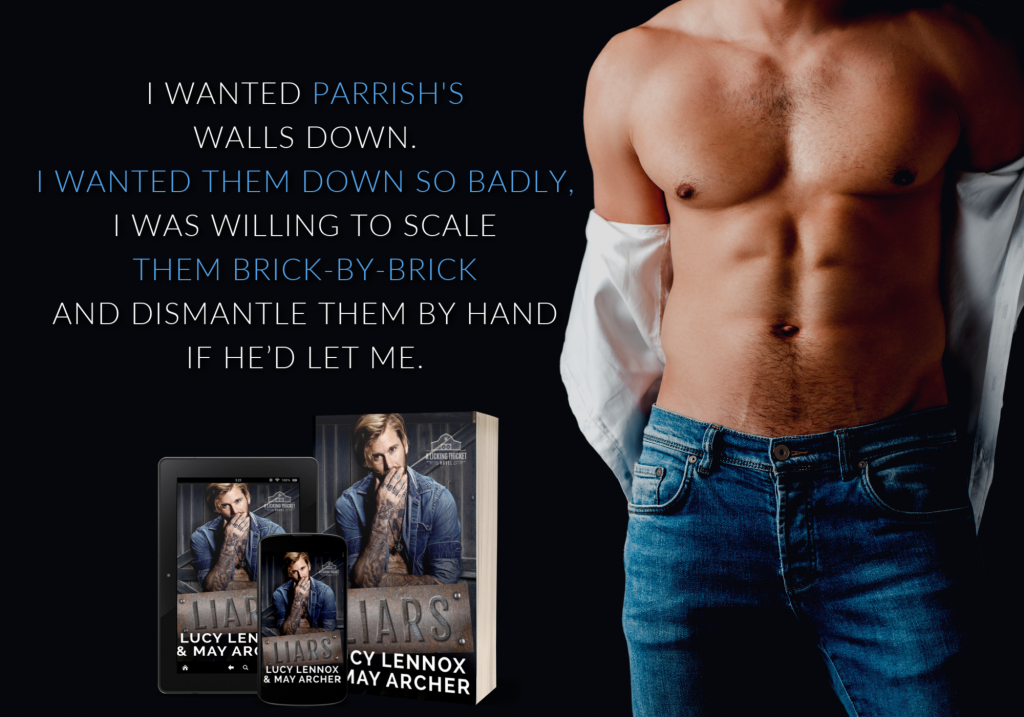 After enjoying creative writing as a child, Lucy didn’t write her first novel until she was over 40 years old. Her debut novel, Borrowing Blue, was published in the autumn of 2016. Lucy has an English Literature degree from Vanderbilt University, but that doesn’t hold a candle to the years and years of staying up all night reading tantalizing novels on her own. She has three children, plays tennis, and hates folding laundry. While her husband is no shmoopy romance hero, he is very good at math, cooks a mean lasagne, has gorgeous eyes, looks hot in his business clothes, and makes her laugh every single day.
Lucy hopes you enjoy sexy heroes as much as she does. Happy reading!

About the May Archer:

A bloodcurdling wail echoed through the little stairwell, and I froze for a second, then rushed headlong down the steps two at a time, skidding to a halt halfway down the staircase when I found the source of the sound—a wriggling baby in a fuzzy pink sweater who was literally crying herself purple, possibly because the giant, tattooed mountain of a man holding her was growling down at her with a ferocious scowl on his face.
I gripped my folder tightly and opened my mouth to protest even though the guy was twice my size, when the baby’s cries quieted for half a second and I caught that the man wasn’t growling. He was… singing?
“Something… sunshine. Only sunshine. You make me happy. Something gray? Christ.” He heaved a frustrated sigh. “Marigold, you’ve got to stop now. You’ve made your point. Be reasonable, baby girl.”
Oh. Oh, good gravy. That changed everything.
I caught my breath and stared. The man looked like he’d been torn off the stage at a rock concert, transported to Nowhere, Tennessee, and stuffed into the outfit I once wore to a middle school dance. There was no other explanation for a guy with overlong brown-blond hair, graceful black inked scrolls emerging from the collar of his wrinkled, blue button-down shirt, shiny Dockers that clung to his tree-trunk thighs, and black steel-toed boots to have appeared in this stairwell. I sure as heck hadn’t seen any other guys in this neck of the woods who were so unapologetically themselves.
And if that weren’t enough to pierce my heart, the kidlet in his arms was gorgeous, despite her tears and wiggling. She had a head full of dark curls, way more than should have been possible for a baby her age, which I’d peg at somewhere around nine months—somewhere past the shriveled-potato stage of early infancy but not nearly at the terrifying walking age.
The baby wailed again, and the giant looked genuinely panicked. He held her flat across his outstretched forearms, like he was carrying a box of pizza or helping her learn the backstroke, and he bent his knees in a kind of next-level Oompa Loompa jig in time to his stammered singing. A pink-and-white striped tote bag sat on the floor next to the wall.
“Work with me, Marigold, okay? You’re not hungry, ’cause you just drank ten gallons of formula. You’re not stinky…” He lifted the kid gingerly. “Not stinky,” he confirmed in a deep, raspy voice that did things to me. “Are you having an existential crisis? Is that a thing kids do? Do you need alone time? Are your lips chapped? Do you hate my cologne?”
The baby fussed harder, flailing her tiny feet. The man groaned, and I belatedly noticed one of those pacifier stuffed animal things lying on the floor by the giant’s boot.
I scurried down the stairs and picked it up. “I think she might be looking for this,” I said, holding it aloft. It was a gray-and-white polka-dotted chicken with a green sucker on the end.
The guy shut his eyes and shook his head. “Ah, shit.”
His eyes popped open in shock as he realized what he’d said, and he looked from me to the kid guiltily. “Fuck, forget I said that,” he muttered.
His eyes widened further. “Goddamn it all.”
I snickered. “Maybe quit while you’re ahead?” 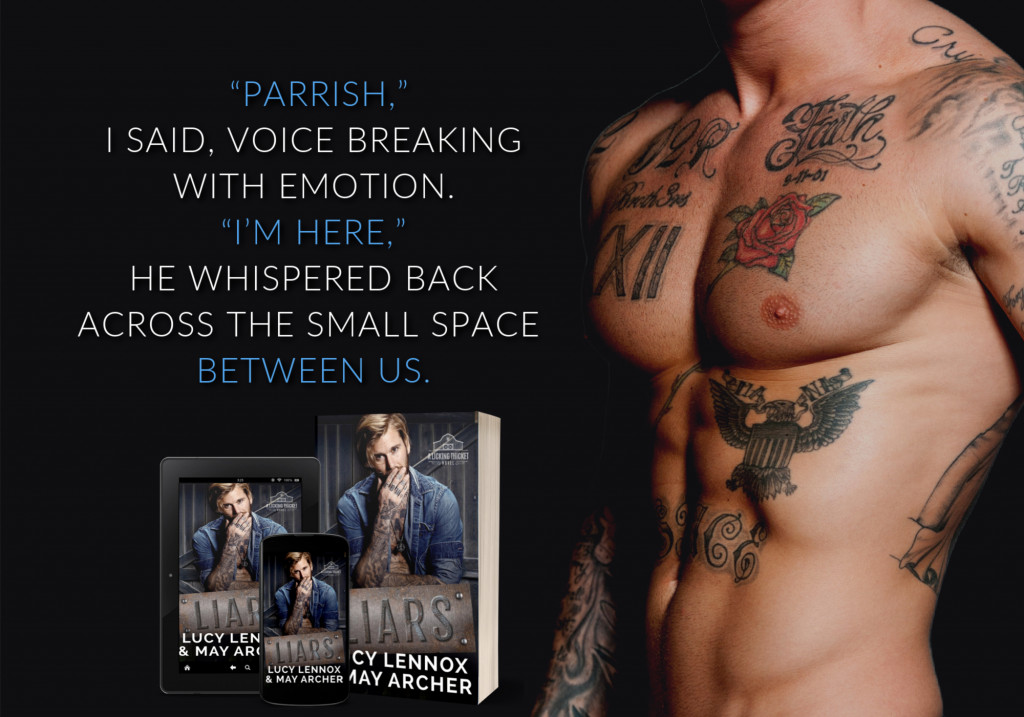