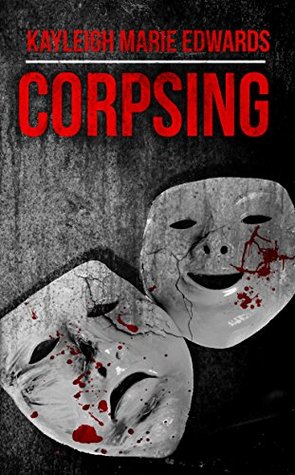 Eight spooky and creepy stories featuring kids in lakes, dickhead guys, dead kids lurking in the dark, and more! I flew through this book.

I spotted this book in September over at the amazing Mediadrome blog (check it out)! And decided to buy it as soon as I could. I am happy I discovered this book because it had some great stories.

I wrote a very mini review for each of the stories, are you ready? Here we go!

: A failed zombie apocalypse story, though given the ending, teehee. It is about a guy working in a mental prison and normally things are already pretty weird but this is a night that will stay with Brian for a long time. I did find it weird how Amy just assumed that Brian was a prisoner there, wth? Girl, I get you are new but that was just dumb. The zombie stuff was scary, but also gave me a giggle. I wasn’t a fan of the characters per se, but the story was good.

: A dude who cannot do jobs because he just sucks decides to take a piss at his old job and OMG I just wasn’t a fan of this story that much. I rated it two stars because I believe I heard about that farm in one of the crime shows I used to watch, and for the title which matched the story perfectly. Oh and another reason, but I won’t say that one.

: A story that started as 5+ stars, went to 5 stars, and ended with 4.5 stars. It was good, but good lord in the end I am conflicted who I dislike more, the mom or Lucy. It was a creepy, and at the end gory, story.
So so not a fan of the mother. I get that your hubby hurt you, but talk to your kid. She is eleven, she needs to know. You cannot just rip her away from all she loves and knows without explanation and then demand her to understand it all. No just no. Though… she never deserved that.

Now You Can See Them:

: A girl gets bit by a spider and something bad is going on with her leg. I did like the whole creepy/gory part, some of the revelations along the way, and then there is how we find out more and more what is going on with the girl. But I just wasn’t a fan of how no one took Amy seriously and how much of a dick Martin was (really dude, we girls don’t want sex all the time, that doesn’t mean we are being mean or playing games). Also that dad, please. The ending, holy crap!

: This was actually had me scratching my head. I am not sure how I felt about the story, but I did get a little giggle from the fact it was raining chicken soup for 40 days and nights. And frozen chickens. This was a very strange addition to the book.

: Sorry, Barry was just an old man yelling at all the clouds. Good lord man, if you are so unhappy than find something that brings you happiness instead of being a dick towards wife and son and also that dude at your work. But the trip was kind of funny… though the ending OMG. NOPE.

‘Twas the Night Before Christmas:

: Dad decides to ignore the wise advice of his sons, yes, you don’t dig up Christmas trees from the freaking graveyard, just NOPE. But OMG, this one got better with each page and, while properly inappropriate I had a giggle when the kids figured out what the tree was. Oh my goodness. I did think it was harsh that they completely forgot about two things when they figured it out. But it was a scary story and oh boy, I am glad I got a tree that is just fake and that in my country you can’t just chop trees like the way they did in this book.

———-
There were stories I really enjoyed it and that I will definitely remember. And one I read aloud to my hubby (the one with Bobby).I would rate this book