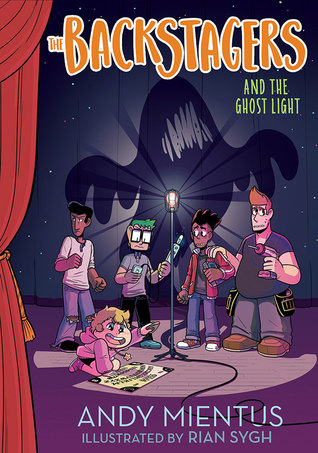 The Backstagers are back and this time they have to deal with a big bad ghost (and an annoying character).

I bought this book… maybe this year maybe last year. I totally forgot about it because it was downstairs hidden, but I remembered it just in time for Halloween and decided to read it.

I just LOVE the Backstagers and was eager to read more about them. I would say that I recommend reading the GNs first or read them soon after due to things that are being said in the book and the fact all the bonds between characters are pretty far along.

I had to get back in to the whole scene, but that wasn’t hard. After just a few pages I was back into the world of the Backstagers as if I never left. I just had to get used to the constantly switching POV, something I am never a fan of as it just too confusing. I would rather have one POV or if you want to do multiple give each their own chapter.

I loved seeing most of the characters again. See Jory and Hunter, see Beckett and his love for electrics and cola, see Aziz do his thing, see Hunter again and this time he is learning something new (I felt a bit sorry for him because it was just so much).

The rehearsals, seeing the old play come to finish and the party that followed, see the new play (which I would have liked to see for real). It was just all fun, and added to the fun is the magic of the backstage. With a portal, with strange things happening and coming out of it.

The big bad villain in this one was a scary one and the whole last part of the book was just one that set the pacing high and I loved every part of it. It really got spooky and a tad scary at times.

I wasn’t a fan of Chloe. Never trusted her from the beginning, it was just a bit too coincidental that she walked in at the right time. Then throughout the book we see her plot and plan. Her diary parts (thankfully only a chapter) were not my favourite to read. I feel sorry for her that she lost her sister, but she just went bonkers and just trusted the first ghost that answered her. Hello there is more than one ghost in the world. rolls eyes Later she did show a better side, but for most of the book she was my second most annoying character.

First would be, and also was in the graphic novels, Sasha. A boy who is supposedly 15 but acts more like 4 or 5. He doesn’t understand work ethic, randomly forgets stuff that is important, just plays games when he should be helping around, goes to find candies for a ghost, and should I go on? I don’t understand why he is even still here. Maybe if I had seen him actually take his job as Backstager seriously I would have liked him more, but in this book he is just a small kid doing dumb shit.

Also I found it completely hilarious that Bailey, queen of the stage and 3 years of main roles (which is also ridiculous give someone else a chance) loses one role and immediately starts packing up her drama stuff and thinks about joining something else. WTF? I had expected better of you Bailey. Who is this dramaqueen? I get that it hurts, but HELLO SOMETHING ALMOST KILLED YOU, no wonder that your voice cracked.

Despite my frustrations I flew through this book, really, I flew. I loved seeing the characters again, see Jory and Hunter together, see that Hunter has a special job soon, see rehearsals, go behind stage again, root for Beckett and Bailey, the illustrations were fab. I definitely will be buying the other books in the series when I can. I would recommend this novel but also recommend the graphic novels!