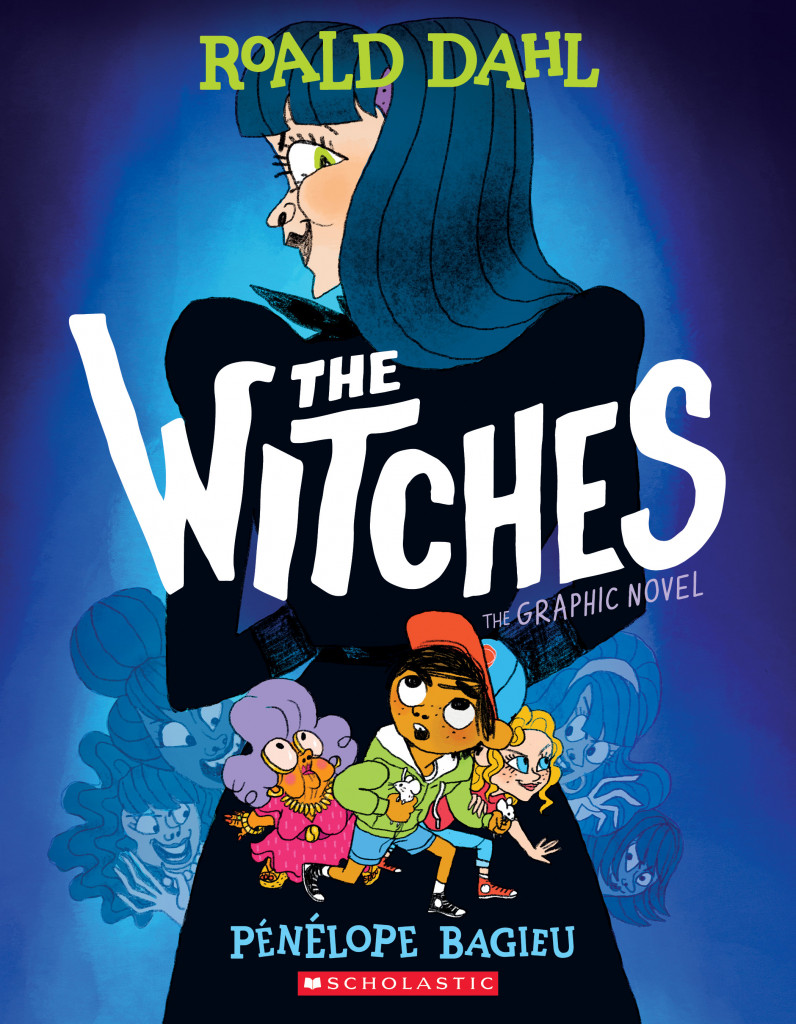 The Witches are back, this time in a gorgeous and dark Graphic Novel! I loved it!

I LOVE LOVE The Witches by Roald Dahl. Not just the original novel but also the old movie. Both scared me to bits when I was little. Witches that looked like normal ladies… that wanted to exterminate all the kids in the world. I was eager to get started on this one. The cover promised that it would have wonderful art.

It has been many many years since I last saw the movie or read the book so I cannot say if the graphic novel follows everything or if there are additions or reductions. I do remember some parts here and there, some things were definitely familiar to me. Plus, now I definitely want to try out the normal novel again. Not any time soon though as I am not visiting a library any time soon (just my hubby who is getting my reservations that suddenly went on transit/transport when I visited last week and so I couldn’t cancel them). But I hope this year at least.

In this book we follow a small boy and his grandma as they mourn the loss of the parents. Grandma was just the best character, next to the boy, in the book. I instantly took a liking to her. She never forced the boy anything, just gave him his space, plenty of love and hugs, and told him stories that people probably wouldn’t tell the average 8-year olds. But it has definitely saved him, and later on is the one thing that keeps him safe. Grandma is old but kick-ass. She is not afraid to tell people her opinion (I had such a laugh at the doctor scene), and she believes her boy and helps him out later. I love it! I had a big laugh at how she scoffs at all the old people and their bingo and such. I believe I may end up like this boy’s grandma. Though I do hope that I don’t encounter witches. shivers

The witches were a terrifying bunch. They seem normal (though for me a bit too normal) but wait until they remove things. Then you won’t be happy. Then you want to run. The Grand Witch is as frightening as she was in the book and the movie. She is not one you want to pass in an ally. She is even mean towards her underlings, with just a snap she will BBQ you into ashes.

I loved how brave our MC was when he turned into a mouse, and the plans he made. Of course he had help from his new friend and his grandma, but a lot things he had to do require a big dose of bravery.

There were lots of exciting and OMG parts. I loved it!

I just love how the parents of the girl reacted. Shocked yes, but I was half expecting them to run away. Instead they loved their daughter even if she was now a mouse. They were so eager to help her out. It was perfection and it made me smile so so much.

The ending? Mm, again it has been a while since I last read the novel, but the ending felt as if there could have been more. I would have loved an epilogue. I would love to know how things went on.

The illustrations were perfection.  Pénélope Bagieu has an amazing art style!

All in all, I would highly recommend this one to everyone.

2 thoughts on “Review for The Witches (Graphic Novel)”