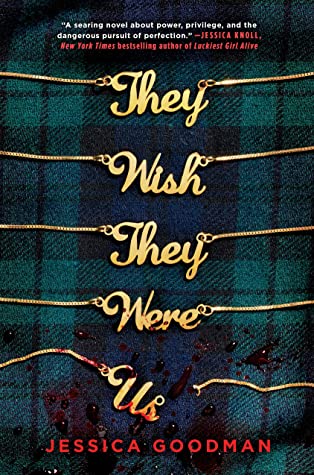 One of my most anticipated reads of 2020 and it delivered! Murder, mystery, not so secret societies, who can you trust?

I just love a book with tons of suspense, thriller, societies that are semi-secret (the best are of course those that are secret), and a murder. I also love the cover, the broken bracelet, the blood, the uniform.

And this book gets real dark and I love that. I have to say that it took me a bit to get into the story. At first I just wasn’t that impressed with Jill. And it didn’t help that the story went back to the past without notice which confused me greatly. Eventually I did get used to the format and I fell in love with it, but yeah, in the beginning it wasn’t easy.

This book is about a group named the Players. Each year 8 new students are picked. In each grade there are 8 Players. The Seniors are the top dogs, and this year that means Jill and her friends are the boss. They want to change things, because we quickly find out that while it is pretty cool to get picked for The Players, I mean think of all the perks, it isn’t easy, especially for girls to become one. Before they get initiated into the group they have to do so called pops. Which are challenges. If you are a guy, you are a happy dude because you get away pretty much without harm… if you are a girl however, be prepared to be broken in ways that shouldn’t be allowed. Stripping, sending nudes, being touched without permission in intimate places, getting the hardest challenges, and it continued from there. It was really horrific. These girls are broken. These girls have had things happening to them that shouldn’t happen at all. I know that I would have definitely quit if it was me… then again given the technology I am sure the guys would blackmail the girls. 😐 I just wanted to hug all the girls in the group and tell them it is not OK. No one should do this.

Jill and her friends want to make things better. But I just knew that this wouldn’t be easy. I have read enough stories about hazing and other stuff in which this topic also has come up. Quite often though people use to the power to make others feel what they felt. The hurt. The pain. Being broken. They are now the top dogs. They get to be in charge. Power overwhelms.

Next to the Players and all their advantages and disadvantages we have a murder mystery. Three years ago when Jill’s group of freshmen were about to be initiated one of their friends was murdered and another was put in jail. Now after three years the one who confessed to the murder is trying to plead innocence and so things get dug up. Rachel, an old Player and sister of the one who confessed to the murder, tries to contact Jill to ask her for her help. You may just imagine Jill’s reaction. But eventually the two of them try to find things. Dig up clues. What really happened that evening? Was it really Graham? The mystery was exciting and it was even more OMG because of how everything was connected, you really had to be careful.

From the start I had three suspects, an old Player, a recent Player, and a teacher. I had fun figuring out the clues and seeing if I could figure out who it would have been. After a few hints there was just one person left and I was eager to see if I had it right.

As I said, I wasn’t a fan of how the format was done in the beginning, but eventually I was looking forward to seeing the past. See what happened, how this group was selected, and read about that final fatal night.

I wanted to shake the parents at some points. They seemed to care more about status and grades while their daughter was clearly broken. Clearly falling apart.

I loved how the pace got quicker and quicker and I just loved reading the book, seeing all the twists and turns, learn more about the characters, find out the whodunnit.

I would recommend this dark, twisty book to all.