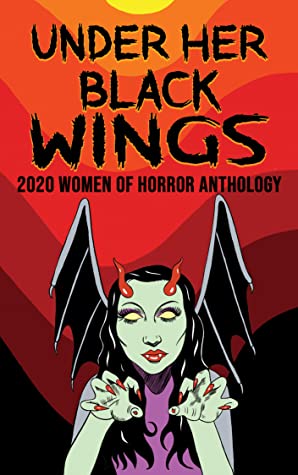 I had been meaning to read this one and then I saw on Twitter it was for free! I decided to immediately buy it, doesn’t matter it was midnight and I wanted to sleep. First get this book. After that my hubby had to steal my Kindle as I started reading. 😛

These 18 stories are about all sorts of spooky things. From vengeful ghosts to people raised from the dead to mythical beasts in the midst of forests to loneliness to tentacle monsters. I loved the diversity in the stories. I loved that there were twists and turns that made me gasp. Sometimes I thought the story would go x way but then it would just stick out its tongue and go y. LOVE IT.
I wasn’t always a fan of the stories, some really ended very abruptly leaving me wondering what happened, I get these are short stories, but you can at least finish them. Some were just a bit too gory for me. Which would have delighted me from 10-ish years ago who wasn’t afraid of some blood spraying around and heads getting cleanly eaten.

I am very happy I found this anthology and that I had the chance to read it. It was just the kind of book that fits perfectly with Halloween.

Hansel and Gretel just now a bit different, but holy wow. While I wasn’t always a fan of the MC, she was just way to spoiled (pinching puppies, laughing at old people) and while I knew what was coming, I was also hoping for it to not happen. Great short story and great way to start.
2.The Aztec:

I wasn’t always a fan of the lady and all she did. But the story itself was interesting and I was curious about the family, about the rituals, and then there is the ending.
3.The Riddled Path:

While I did love the story and what they found in the woods, the gore was just too much for me. Plus, I would have liked a better ending.
4.Desert Kisses:

Another WTF and I felt quite uncomfortable reading this one as we read about a serial killer/rapist. The story still gets three stars because of Monica and the shadow train who is out for revenge.
5.Somewhere to Belong:

This one just made me sad. That poor woman, poor those other souls. 🙁 I can understand her loneliness though I would never do that. Nope. Nope.
6.Heart for the Heartless:

Zombies! Serial Killers. Murder. Gore (a bit too much). Poor Josie. Also that ending was just perfection. Well, good job guys, you fucked up.
7.The Darkness:

This was an amazing post-apocalyptic read with a nice twist. I guess I could have seen it coming, but it really wasn’t until the cat that I knew something was very wrong. The part in the house, HOLY WOW. DANG.
8.Sarah Smiles:

Another WTF story with an ending that is pretty shocking. I wasn’t a fan of the guy, he was just a bit too much for me and a bit too stalkerish. But I did like the story in overall and the ending definitely brought up the rating.
9.Goddess of the Lake:

Meh. Just not that interesting to me. The ending was really what saved this story from 0.5 stars. That one was pretty WOAH. I kind of had expected it, but also not.
10.Abigail’s Army:

Mostly because nothing was really happening until the very ending and that was a shame. I think if this one was fleshed out more it would be better. But I did like the twist at the end.
11.Road Rage:

Eww on the cheating, big big eww. But I love the twists and turns that I didn’t see coming. That ending! o.0
12.Cold Calling:

Had potential, there was a revelation that was good, but it was also confusing because I just didn’t get what would happen if the girl would pop in the midst of people, I kept expecting monsters… but nothing happened and it ended WAY too sudden.
13.Upon Acceptance:

Not a fan of the MC and what she did. And how dumb is she to do that at the end? Helllooo? The story wasn’t that fun, bit bland, and the ending? Why?
14.The Faceless Woman:

This was such an amazing story and I loved how it ended.
15.Unplugged:

So many twists and turns, oh my. This one I thought would be about x but then it turned out all to be about y. OH MY GOSH.
16.Firstborn:

I loved the folklore + religion, and I loved how creepy the story got. I wasn’t a fan of the cheating however. Yes, I would call it that.
17.Sadie:

This definitely had potential… but I am just not entirely sure what happened and how. How did she meet the little girl? How did the whole wolf thing happen? It was all a dream right? Whut?
18.Pontianak:

All in all, 3.5 stars. It was a great read and I am definitely spooked out. As I finished this one I started a new horror anthology, and I guess I shouldn’t. Woke up a few times last night (October 21st). 😛