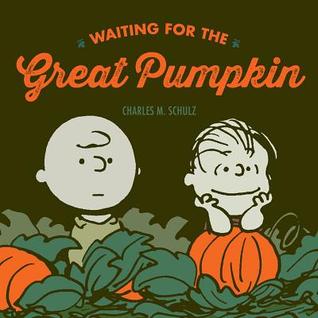 All Hail the Great Pumpkin who brings forth toys and fun things!

I just love the Peanuts/Charlie Brown series and a few years ago I bought this book as I just love Halloween and pumpkins. This looked adorable! I decided that it was high time to re-read this book again after five years. Coincidentally.. I read it on the same day as I did the first time. Spooooooky coincidence!

In this one we get various comics featuring various years of Linus praising the Great Pumpkin and trying to get a glimpse of it, and not just that, but also convince people that it is a real. Along the way though his faith is tested again and again and I just felt so sad for him, but also proud that he just kept going and believing. We see him hope that the Great Pumpkin lands in his pumpkin patch (I would so love pumpkin patches, but we don’t have them here, not like in the US at least), get startled by Snoopy, and write letters, oh and dodge his big sister who thinks he is an idiot (but that is nothing new, right?).

I found this incredibly fun and sweet and had tons of fun reading it. A bit sad it is so short, but I also don’t think it would be good if it was longer. I am very confusing, I know. 😛 Though maybe it could have ended on another note because I think ending it on Sally hating Linus was just not that much of a good ending.

Also Charlie Brown is such a good friend. He is there for Linus when he needs cheering, and makes up a few white lies to make sure that Linus can keep believing.

All in all, this is the perfect Halloween read. <3 And I would recommend it to all who wants some cute pumpkin and Halloween fun.

2 thoughts on “Review for Waiting For The Great Pumpkin”