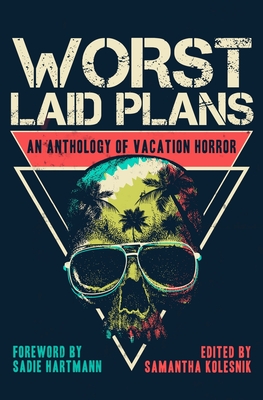 14 spooky, weird, WTF stories can be found in this fun anthology.

I found this one due to the amazing Mediadrome! I immediately pre-ordered/bought the book from Amazon and then I had to wait for a bit before I could read it because I wanted this one to be for October. For Halloween.

These stories feature all sorts of creepy things. From subterranean monsters to ghosts to girls who can smell things to vacations gone wrong. It also features a few dudes who I wasn’t a fan of *looks at the father in the last story or the dude in the Peelings story. Some stories were super-exciting, others were just confusing balls of words. I loved that some stories were short, but others were just a tad longer.

I also love the introduction, I would give that one 5 stars, I love it when people get creative with introductions and lure you in the book.

The cover is amazing! Spooky but also a bit silly. And I love the colours.

Here are my star ratings for each story, with some comments to go with it. I could finally use notes from my zenpop stationery crate, they are cute so it makes things a bit more sweet and not so scary.

: A creepy story about a guy who gets a notice with help on it from a girl, decides to follow.. and well it was very WOW and WTF at times. The ending still has me shivering.
2.Summers With Annie:

: Confusing especially given how it is told, but still spooky with a very interesting ending.
3.Expertise:

Karma comes by for a snack. Muhahaha. This was a creepy story and dang that barracuda is just way too huge. I like the twists.

: Very creepy dad, poor daughter, a lot of wtf moments, be afraid of dead women… they won’t forget, a big fat NOPE. That ending was WOW, but also sad.
5.Deep in the Heart:

: This was a very big NOPE thank you I am just going to avoid caves now story. With sweet LGBT romance, I really found it sweet how our MC was swooning over the tour guide. Lots of running, a dash of gore.
6.Peelings:

: Horrible twins and horrible husband. I just felt sorry for the woman. Still not entirely sure how things happened the way they did, but the ending was just NOPE. Don’t visit this themepark. No thank you.
7.The Difference Between Crocodiles and Alligators:

: A confusing WTF story that left me scratching my head. I am still not sure what happened. Is our MC unreliable, is it something else. Rated it 2 stars because there was still some good about it.
8.The Cucuy of Cancun:

: One pissed Cucuy (who you don’t want to piss off), creepy and gore stuff, love the folklore. The ending, OH BOY.
9.Taylor Family Vacation ’93:

: Annoying too focussed on the camera father, confusing mystery and I am still not sure what exactly happened even with the ending. I did like that the camera was doing stuff on its own.
10.The Penanggalan:

: Love the folklore, love how it all starts so well then BOOM, the ending HOLY CRAP. I found this one well-written.
11.Sex with Dolphins:

: A weird story and that title just put me off a bit.
12.Caught a Glimpse:

: Dude is a pervert, I don’t care if you can see her, just don’t watch her. There were creepy things happening and the girl was just a big fat NOPE. The ending was a tad confusing though, but still creepy.
13.In the Water:

: Two timelines (before/after) and it was a spooky WTF read. I also still got questions, but for most I am very happy with this story and how creepy it got.
14.Good Times in the Bad Lands:

: Meh dad, annoying kids, weird road trip. I love that they were using old maps. But the ending was just weird and I am just so confused.

Would rate this anthology 4 stars! This was a great read. I am so glad I found out about this book! Recommended!

2 thoughts on “Review for Worst Laid Plans: An Anthology of Vacation Horror”