A swoony welcome to the Blog Tour for Fawned by Winter Pior! I am so so so hyped to be part, I was already hoping to be part of the tour when I signed up. Oh man, if only I could see the face of me from a couple of years ago, if she knew I signed up for an erotica/pet play novel she would probably faint. 😛 The current Mehsi is an upgraded version and can handle it better. 😛 Also this girl is going to read the book, so look forward to a review someday (my schedule is full, with no thanks to sudden tour confirmations….).

For today’s post I got an excerpt from the book, a giveaway (US only, sorry), and of course book/author information. 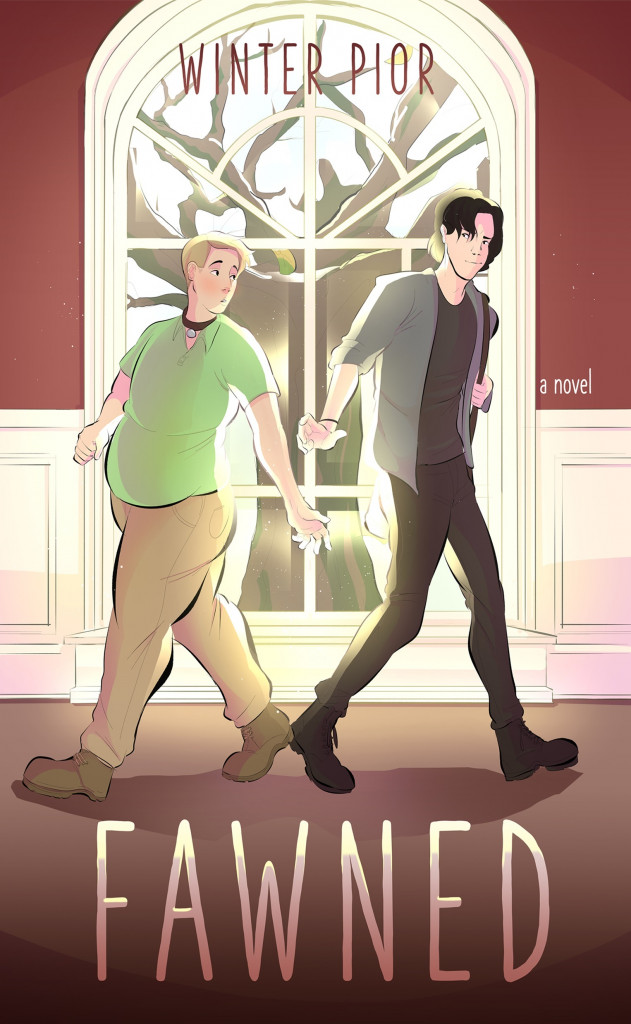 Barnaby Hirsch isn’t one to put himself out there – he’s shy and, admittedly, awkward – but desperate times call for desperate measures. When he signs up for a dating app, the last person he expects to match with is the campus’ gay playboy, Gil Connolly.
It should have been a one-night stand, but it’s one night Barnaby can’t forget. It’s the closest he’s ever felt to someone, the closest he’s ever felt to belonging.
Gil wants someone to belong to him. He has a collar, and he wants someone to wear it.

Barnaby has a deer onesie, and he’s starting to think, maybe, the two might look good together.
When you purchase Barnaby’s Blend Tea from Adagio Teas, 5% of the sale will benefit The Trevor Project!

Winter Pior is an Aries, artist, and first-time author of the novel, Fawned. He lives in New Jersey and has no pets, animal or otherwise.

The next time they met, they did not have sex. Barnaby didn’t even know he’d be seeing Gil.
It hadn’t been a very good day, so he wasn’t particularly in the mood to begin with. Hadn’t so much as texted his Friend yet. (Were they friends?) Gil didn’t need to hear about the potted plants he’d dropped in front of his entire class, because he didn’t stop to think to balance them in his arms first. Or about his class watching as he scrambled to pick up the pieces, apologizing to everyone and no one, until his professor came over with a broom. He didn’t need to see the way Barnaby hunched at the counter, nearly doubled over under the weight of customer complaints. He’d gotten two drinks wrong from his already lingering shame, and he’d hesitated on several orders after that.
People weren’t very happy with him.
If nothing else, Barnaby didn’t exactly feel attractive. His cheeks were wet, there was a lump in his throat, and his eyes were raw from rubbing.
But at just about midnight, Gil came in anyway. He wore a grin that faded the closer he approached Barnaby. “You alright?”
“Yeah, I’m—” Barnaby wiped his face and sniffled, standing up from his stool to force an awkward smile— “I’m fine. Just midterms, y’know?”
Gil huffed, and he might’ve been trying to laugh, but wasn’t that more effort than Barnaby deserved?
He rushed to make up for it, “Can I get you anything?”
Gloomy eyes analyzed him a moment longer before an answer was given, “Black coffee.
Thank you.”
Once the money had been transferred, Gil strayed from the counter, scoping the room. Paper bats dangled from the ceiling, zombies climbed out of posters on the walls, and cartoonish, wild eyes peered through every window.
“What’re your plans this weekend?”
Barnaby finished pouring his drink and left the mug at the register for Gil. He was hesitant to tell him. He didn’t even want to plan for sex in that moment.
He sighed, turning to wipe down the coffee machine while telling him about the Halloween party he and Seth were supposed to go to instead. He ended with, “but I probably won’t go. I’m not really a party person.”
Gil perked up.
“That makes two of us.” He leaned against the counter, sipping his coffee. “I know it’s probably not much different, but I was going to go check out the haunted house they put up at that old factory. The school’s running it, so it’s probably going to suck, but I figured it’s something to do.” He shrugged. “Only problem is I’ll probably look like a loser if I go alone.”
Barnaby felt his lips curl. “I’m sure there’s someone who’d love to join you, Mr. Popular.”
“Except,” Gil quipped, “the one person I’m actually interested in taking might already have plans.”
“Oh?”
“Yeah,” he mumbled over his mug, “something about a Halloween party with his roommate that he may or may not go to.”
Barnaby paused. “Wait—” He glanced over to spot Gil smirking at him. “Do you mean—?”
Steel eyes swept over him. “Do I have a shot?”

Yes. As a matter of fact, he did.
Suddenly, it didn’t matter what happened the next day because, that following night, Barnaby had something to look forward to other than sex.
He had a reason to wear his deer onesie with its little plush antlers on the hood. As silly as he felt wearing it, in his humble opinion, Seth’s costume looked sillier when he left for the party.
Though, rather than make him feel insecure and mention the shoulder pads were likely meant for a taller individual (in contrast, giving Seth the appearance that he was constantly shrugging), he simply told him to have fun.
They had already been through it: “Halloween costumes at our age are either stupid, scary, or sexy, Barnaby. ”
Well, Seth, you certainly marked all the boxes this year.
I’m here…
Hardly a moment after the message popped up on his phone, Barnaby hurried out of the dorm, down to the building entrance.
Gil had said he’d drive them to the haunted house, and sure enough, he was ready and waiting, leaning against a shiny black Range Rover with tinted windows.
“Hi.”
“Hi, yourself.” Gil stepped closer and beamed, “You look really cute. I love it.”
Barnaby shrugged and folded his arms; his face felt warm despite the autumn chill. Scanning Gil’s body, he raised a brow. “Where’s your costume?”
Grey eyes widened, then blinked. “I’m wearing it.”
Barnaby grimaced, and he reconsidered the man’s camouflage-print sweat-clothes.
“You’re…a soldier?”
Gil’s jaw dropped, and he flailed his arms. “I’m invisible. Like the Invisible Man. Get it,
‘cause I’m—”
“The camo!” Barnaby gasped, remembering that the joke was very much A Thing. “Sorry, I’m— it’s clever. I’m dumb.”
“You’re not dumb.” Gil grabbed him by the shoulders, pulling him closer.
Before Barnaby could try to convince him of the contrary, the fabric of his onesie was tugged away from his neck –
And the vinyl collar he’d taken from Gil was revealed.
“You’re wearing it,” the man noted, sounding surprised.
For a second, Barnaby wished he could be invisible, too. He hid his face away in Gil’s chest, mumbling, “You said I was like a pet…and I guess I have an animal costume…So…”
“So, a pet deer, hm?”
Fingers carded through his hair, and an arm draped around him. It certainly made him feel coddled like one.
“Is that what you are?”
In truth, he would’ve worn it without the costume. But because he had spots down his back and antlers on his hood, he nodded.