A jellybeany welcome to the Blog Tour for The Smartest Kid in the Universe, the newest book by Chris Grabenstein. This was a surprise confirmation, but a very happy one as I was so so hoping to be part of the tour.

For today’s post I got a 4.5 starred review (really enjoyed the book), a giveaway (Sorry, US only), a book trailer, and of course book/author information.

I received this book from RockstarBookTours in exchange of an honest review.

So, this was a book I was looking forward to A LOT. I love Chris Grabenstein books and I was eager to try out his newest. It was a bit of a surprise getting selected for this tour (just got the confirmation late evening Nov 23rd) and I was wondering if I would make it to read the book. Well, my knee (still not 100%) decided to hurt so much I couldn’t sleep so I decided it was time for some distraction and this book sounded perfect for that.

This book is about a boy named Jake. He is a chill dude who just likes to do as little effort as possible and just wants to have fun and play video games. Well, his life is about to change as he finds some yummy jellybeans and suddenly he KNOWS everything (or well all that is in those beans). Moral of the story: Don’t eat candy that is just lying around.. before you know it your head knows all sorts of trivia facts. 😛
Jake is a pretty good character, he really grows as the story continues and I was very proud of him. He learned quite a few new things, he wasn’t always happy with the beans, but it is thanks to the beans that he became a much more responsible person in many different ways. And, if I have to be honest, much more interesting as well. Because beginning Jake was fun, but I am not sure if I could have gone through 300 pages of him like that. I loved how much he cared for his sister and how bothered he was that he couldn’t help her out with Spanish. I found his love (would call it that) for Grace adorable and was hoping he could tell her for once.

I found it hilarious that he could just sprout out random trivia, though I also have to mention that after a while I just skipped those facts, but that he couldn’t do a word of Spanish. Even later instead of Spanish he can now do Spanish cuisine. I was happy to see Jake grow up a bit more in the story and later just watched Spanish shows to learn the language (and there we learn something new and exciting about the beans).

I loved Grace, though her short bursts of Spanish here and there didn’t making reading easy. We don’t get taught Spanish here in school. While I did a short course in Spanish for a few months (I would have stayed longer but I found my hubby and I moved to his city to start living together), that has been a few years so while I recognised words, I couldn’t fully understand them. But I did like her character and I loved how smart she was and how she kept going.

Kojo was fun and I just love his love for old detective shows. I remember watching those as well when there were re-runs on the TV here. He was a good friend to Jake. Though could he please stop saying those sentences, and the word baby. It was just too much.

The villains were properly evil, though at times a bit too much for me. I am just not a fan of POV’s from villains. I just get frustrated about it. But it was interesting to see how far they went to get what they wanted (the treasure + the building) and what they did to get so far.

Yes, I mentioned treasure. There is treasure. But so far in a long time no one has cracked the code. No one has found the treasure. It wasn’t until much later in the book that the treasure part truly begins but I didn’t mind. There was enough to read until then with FBI/CIA, a crazy scientist with a very dangerous lab setting, Quiz Bowls (which I always love reading about as we don’t have something like that here), and more. Yes, I was looking forward to the treasure but I was sure that would come. And when it came, OH BOY, the book really took the adventure switch up a level. There are riddles, geometry (eww but also awesome in this case), and will the kids find the treasure… or will the villains find it first. It was exciting and I just had to continue reading.

The ending (the Quizbowl and how things continued for Jake, but also for the school) was fantastic. I am so happy with the route the author picked for Jake. Throughout the book I was worried about the beans and if they would stop working. Or if Jake would get an antidote. Or if he would just be smart forever. I am not going to tell you which route the author picked, but I loved it to bits. Perfect!

All in all a fun book! I would have loved illustrations, I think that would have made the book even more awesome. Great characters, a fun story with tons of humour and never a dull moment, and tons more. I would recommend this one! 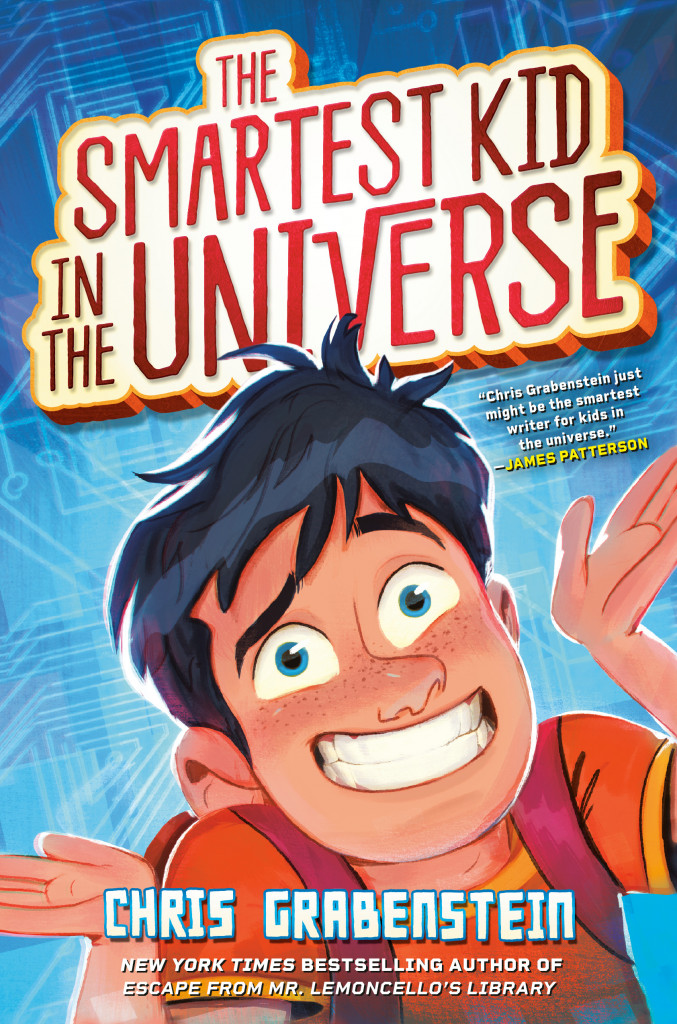 “For centuries, humans have consumed information through their eyes and our ears,” said Dr. Backbridge. “Here is my prediction. In the not-too-distant future, we are going to ingest information. You won’t need to read a book or attend lectures. The chemicals in these pills will do your learning for you.”
12 year old Jake’s middle school is about to be shut down. Jake and his friends know their school’s worth saving-if they could only figure out how! When Jake spies a bowl of jellybeans at the hotel where his mom works, he eats them. But uh-oh-those weren’t just jellybeans, one of the scientists at his mom’s conference is in the process of developing the first ingestible information pills. And THAT’S what Jake ate.
Before long, Jake is the smartest kid in the universe. But the pills haven’t been tested yet. And when word gets out about this new genius, people want him. The government. The mega corporations. Not all of them are good people! Can Jake navigate all the ins and outs of his newfound geniusdom (not to mention the ins and outs of middle school!) AND use his smarts to figure out how to save his school? (Hint-it will take someone smart enough to decipher an almost forgotten pirate legend!) It turns out, sometimes even the smartest kid has a lot to learn!

CHRIS GRABENSTEIN is the #1 New York Times bestselling author of ESCAPE FROM MR. LEMONCELLO’S LIBRARY, MR. LEMONCELLO’S LIBRARY OLYMPICS, THE ISLAND OF DR. LIBRIS, WELCOME TO WONDERLAND: HOME SWEET MOTEL and many other books, as well as the coauthor of numerous fun and funny page-turners with James Patterson, including I FUNNY, HOUSE OF ROBOTS, TREASURE HUNTERS, and JACKY HA-HA. Chris lives in New York City with his wife, J.J., two cats, and a dog named Fred. You can visit Chris at ChrisGrabenstein.com.