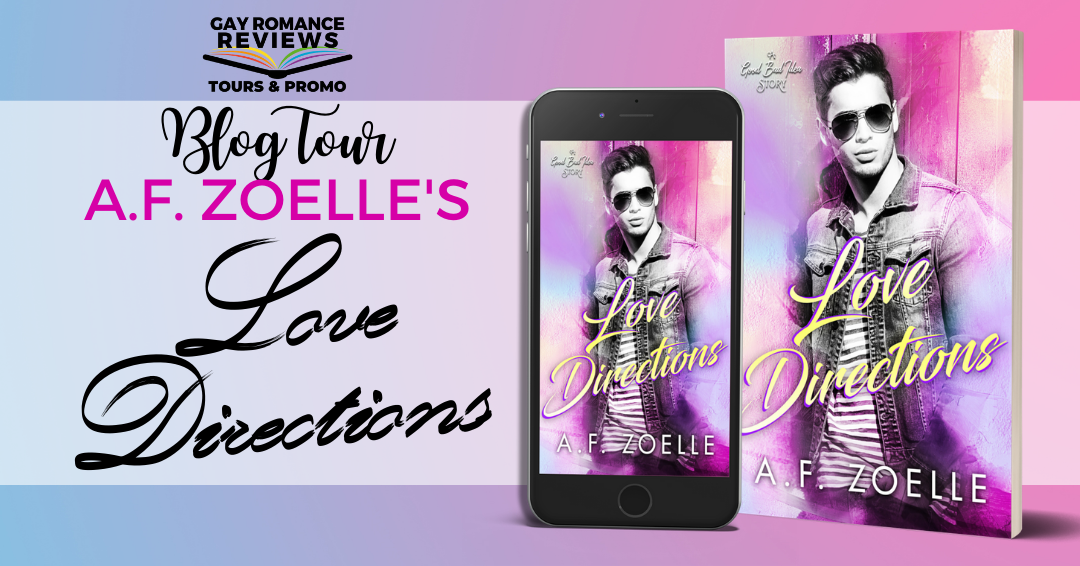 Welcome all to the Blog Tour for Love Directions by A.F. Zoelle. I am so so happy I can be part of the tour for these amazing books! Love Directions is book 5 in the Good Bad Idea series, this time featuring Elias and North.

For today’s tour I got an excerpt to read and enjoy, a couple of teasers, and book/author information. A lot of things! does a happy dance 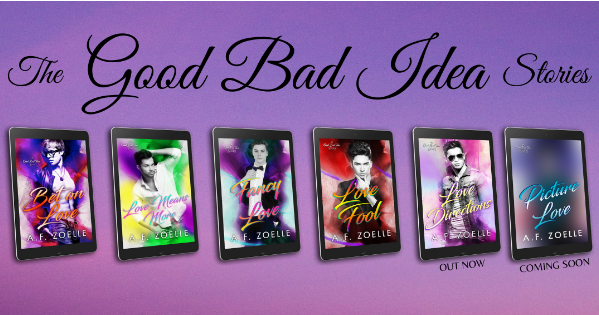 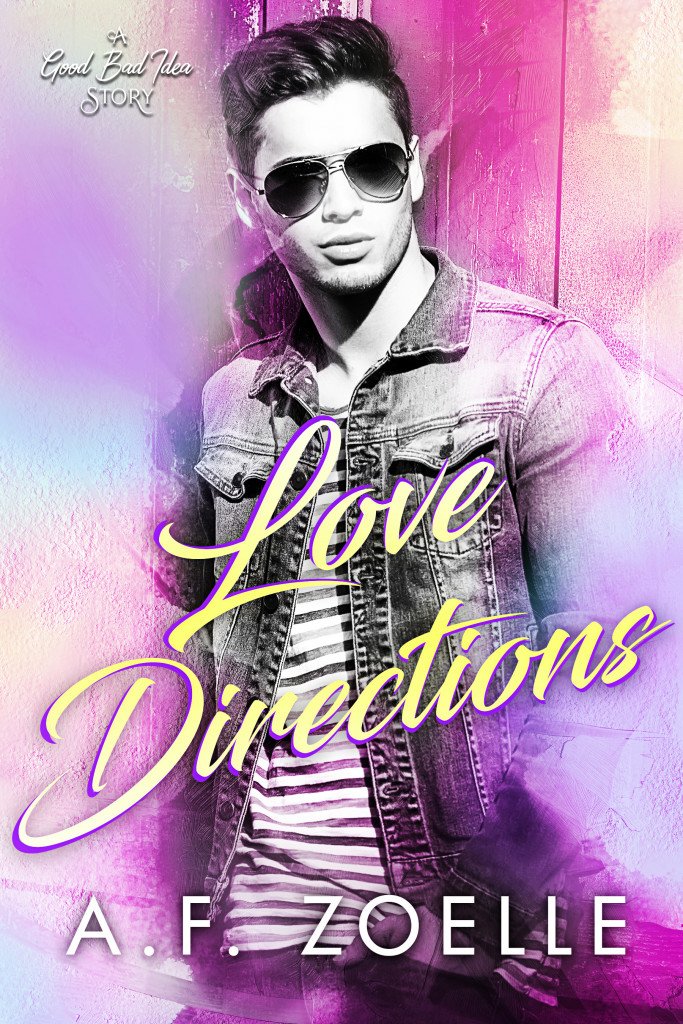 Elias Forthwright
Can a chance meeting lead to true love? I sure hope so, because I’m falling hard and fast for North. I’m normally too shy to be attracted to a playful flirt like him, but he’s full of surprises that bring out the best in me. Even though we’re nothing alike, he’s everything I never knew I needed.
Maybe it’s silly to feel like the cosmic universe conspired to bring us together, but North makes me want to believe in the impossible. After all, it would be stupid to run away from love when all signs point to him being the one, right?

North Easton
To say I’ve lived a strange life is a massive understatement. I’m used to weird things being the norm, but even I never expected to fall in love with a sweetheart the first time I meet him. Elias makes me feel all warm and gooey inside like a hot brownie. If I get lucky, maybe he’ll want a bite. And if I’m really lucky, he’ll want to come back for seconds, thirds, fourths, and forever.
I know we just met, but is it too soon to plan for a lifetime of canoodling with Elias? Shockingly, I don’t mean that as a euphemism for once.

Love Directions is the fifth book in the Good Bad Idea series. This novel features a shy/flirt, instalove, opposites attract romance. Full of cute sweetness and sexy fun, every story ends with a satisfying HEA and no cliffhangers. Each book can be read as a standalone or as part of the series in order. 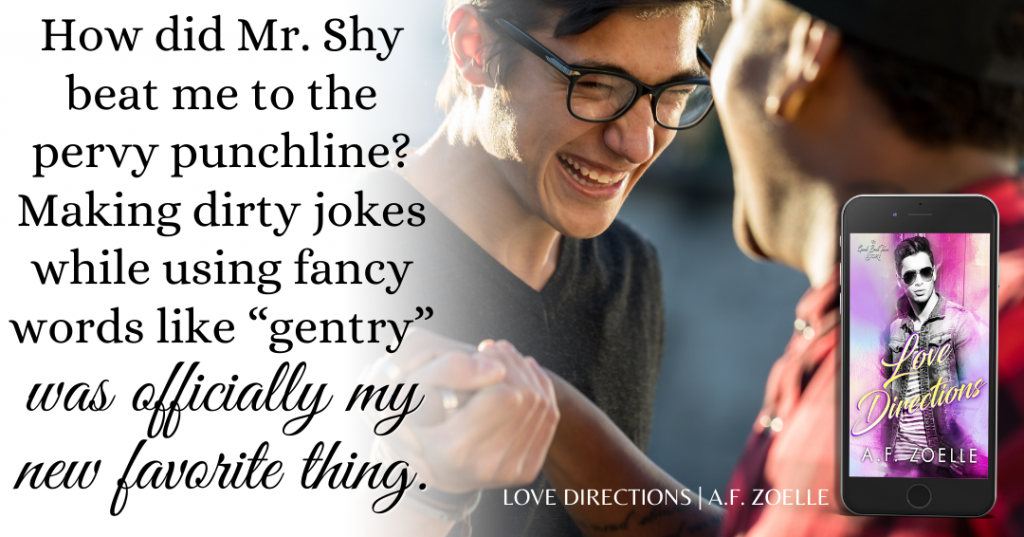 A lifelong storyteller, writing has always been A.F. Zoelle’s greatest passion. When she’s not writing about gorgeous men being sexy and in love, she enjoys procrastinating on her studies and numerous side hustles to indulge in Japanese musical theatre. She looks forward to renouncing her nomadic scholarly life someday soon so she can have Ragdoll cats to come home to instead of just dust bunnies.
For real time updates on her writing progress, please follow her on Twitter. You can also follow her on Facebook or sign up below for her newsletter announcements about her latest releases and get access to monthly previews of upcoming books, deleted scenes, and works in progress. 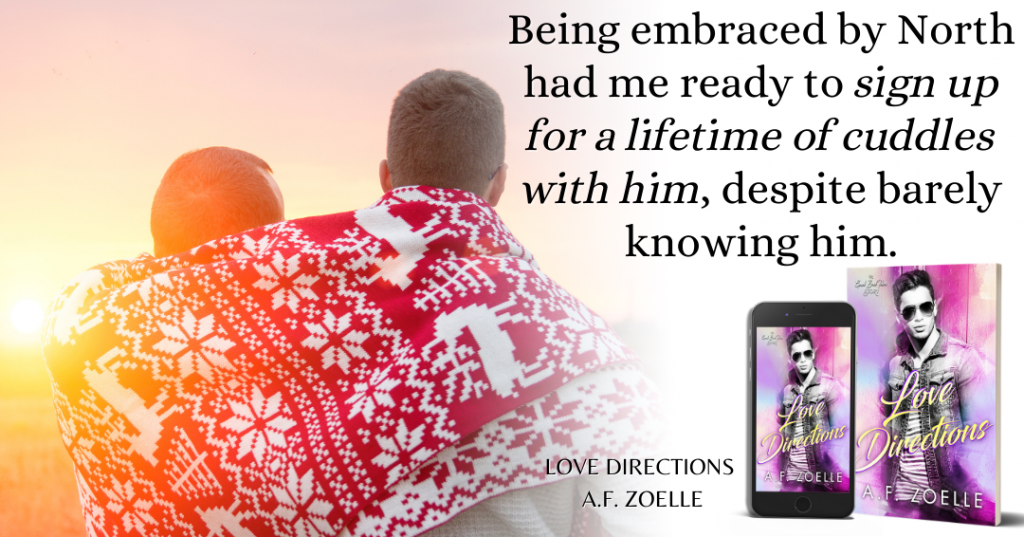 North shook my hand as he introduced himself, sending currents zinging through me as we touched. “I’m North Easton. Nice to meet you, Elias.”
That was quite an interesting name. “North Easton?”
“Yeah, and my twin is West Easton. There isn’t a joke about that we haven’t heard.” He grinned, even though he was probably sick of everyone having the same response. “If you think that’s bad, my mom has a cat called Woof. My theory is she’s overcompensating for being named Linda.”
He said it with a straight face, but I couldn’t believe him. “You’re joking, right?”
“I wish I was. When she was a kid, she had a Chihuahua named Meow.”
It was so absurd I had to laugh. “Now you’re just messing with me.”
North pulled out his phone and opened his group text with his mother and sister. He scrolled up a bit to a picture of a very regal-looking gray Siamese cat wearing a gold crown and white fur-lined purple velvet cloak. The texts under it made me snicker.
Mom: King Woof requests your presence at dinner.
West: Kings don’t make requests; they command.
Mom: Fine, he commands you to stop being a smart-ass.
North: Good luck with that. Does Lord Woofie have a specific time in mind?
The conversation was so delightfully weird. “I bet her next cat’s name is Mouse.”
“You’re probably right. That’s absolutely her sense of humor.”
I raised my drink in a toast. “Congratulations, you’re officially the most interesting person I know now.”
“I’m honored.” He clinked his glass against mine. “So, what’s this I hear about me being your stranger?”
As he drank his cocktail while watching me, I found myself tongue-tied. Thankfully, Red answered for me. “His horoscope said he would meet a stranger that would change his life today. It also suggested that he should be open to the possibility of love, hint hint. Mine said I should play Cupid, so this seems like the perfect trifecta to make magic happen.”
It was embarrassing having my horoscope habit being revealed. I hurried to justify my interest. “Horoscopes were my mom’s thing.”
North studied me, his gaze piercing through me as if he could see all my secrets somehow. I felt exposed but remained silent as I waited for him to respond. He took another sip before he shocked me. “You must be a Virgo.”
I blinked at him in disbelief. “How could you tell?”
His cryptic smile did funny things to my heart. “I’m magic.”
“If you’re so magical, what am I?” Red challenged.
“Oh, you’re definitely a Taurus. There’s no question about that.”
His accuracy was uncanny, further intriguing me. “Why do you know that?”
“I told you: I’m magic.” He stated it with so much confidence, I almost believed him. Who was this guy?