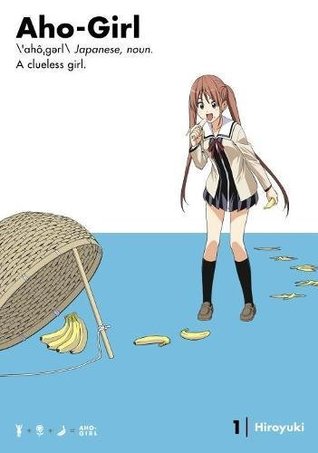 Meet Yoshiko a very hyper and not that smart of a girl. She is our Aho-Girl!

My hubby and I loved the anime for this one and so I decided to gift him almost all of the manga so he (but also I) could read the series while we kept hoping for a second season.

I was in the mood for something silly and dumb and decided to start with the first volume. I have to say I really enjoyed it, but yes, at times I was a bit nope-ing out of things. Just like the anime. Some things were just not right (like the mom making a cocktail so Akkun would sleep and her daughter could do things, or Sayaka underwear). The violence at times by Akkun gets a bit too much. Dude, I understand that you hate her, and probably almost everything around you given how you react to people around you, but come on, no need to throw her like a sack of potatoes against a wall, or hit her on the head?

But there were also enough parts that had me laughing so hard. Wondering how the hell Yoshiko got through school is one, did her mom pay for it or does the school feel sorry for Yoshiko’s empty head? Because this girl can barely multiple and it took her ages to figure out 5+2 is 7. See her be proud of her achievements even if they are zeroes. See her be a total child which was both cute and hilarious. I loved that she never was put down by anything, not Akkun the love of her life being mean, not her grades, not falling on the ground, nothing. She just keeps going. Her endless energy just went on. I loved those parts were she was playing with a group of kids and their reactions when she tackled a dog. 😛 Or the time she ran out of class, initiated a fight between her henchman and Akkun and then ran off to watch her drama… this all taking place while classes were ongoing. And then there is her henchman, as everyone and I totally agree would call him. He is dedicated to his boss lady. Very dedicated.

I loved meeting new people. From the head monitor who turns from sweet girl to stalker to Ruri the little sister of Akkun and who has just as an empty head as Yoshiko (though I think even more so as Ruri actually tries to study… and gets zeroes whereas Yoshiko never studies).

The 4-koma format works perfectly for this series. I don’t think the jokes would have the same impact/the same feeling if it was done in normal format. However, there were some parts that just worked better in the anime. Some needed motion. Sounds.

The art is OK. It does fit with the gags/the feeling of the manga.

All in all, despite the awkwardness and some scenes which weren’t too OK, I had fun reading this one and I cannot wait to read the next volume.