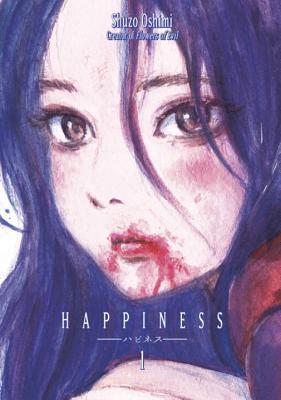 This was an interesting/OK manga about a boy who gets bitten by a vampire and slowly turns into one.

I spotted this one as read by one of my friends on Goodreads and decided to check it out. The cover looked pretty and I also liked the premise (well, except for the bullying part).

I have to say I did enjoy this book at times, but it felt very introductory and the ending was just a bit too soon, I think adding another chapter or two would have helped lessen both those feelings.

Meet our MC, a slightly wimpy guy who gets bullied on school (mostly that means he is the delivery boy and has to get the popular group in his class food). I wasn’t such a fan of him, especially in the beginning of the book. He did get a bit stronger later on, thanks to his new powers.
I just found him an idiot for going outside JUST after the news that some other guy was murdered in the streets. It just felt a bit too plot convenient. Look there is something murdering people. Look our MC has to become a vampire, so um, he will just have to go outside. Especially, since later it apparently just didn’t matter, we still see people outside despite the fact there have been 2 attacks in such a short time. Again, plot convenient much?

It was interesting to see the changes in him. While in many vampire folklore the vampires turn to dust at the mere bit of sunlight it seems it causes mostly uncomfortable feelings for our MC. He can still walk in the light, he can still be outside. I wonder if that will change as his powers come out.
I wasn’t such a fan of the constant thigh/leg shots. I get that he is probably horny/wants blood, but hello there are other places that give blood as well and it just seems weird that it focuses so much on that one place.
I am curious what more powers he has, so far we see that he can fly through the sky (or at least jump very far), he is very strong.
Will he get fangs? Or will that stay away? Then again, he would need them if he wants to satiate his lust for blood. Can he keep eating normal food, because it seems that it is giving him some trouble. Then again, it would stand out if he isn’t eating. Mmmmm.
And who is the mysterious girl who bit him and gave him his options?

The art was OK-ish.

All in all, a pretty OK volume, I may read the next volumes when I need some more vampires in my life.

ALSO, while adding this review to my blog I found out that just a few days ago I read another work from this mangaka, Chi no Wadachi! That explains why the art was so familiar.