howlsA big welcome to the Blog Tour for A Wolf for a Spell by Karah Sutton! does a happy dance I am so excited I got picked out to be part of this tour. This book sounds magical!

For today’s post I got an excerpt (a bit from the first chapter). I also got book/author information!

Let’s get this magical tour started~ 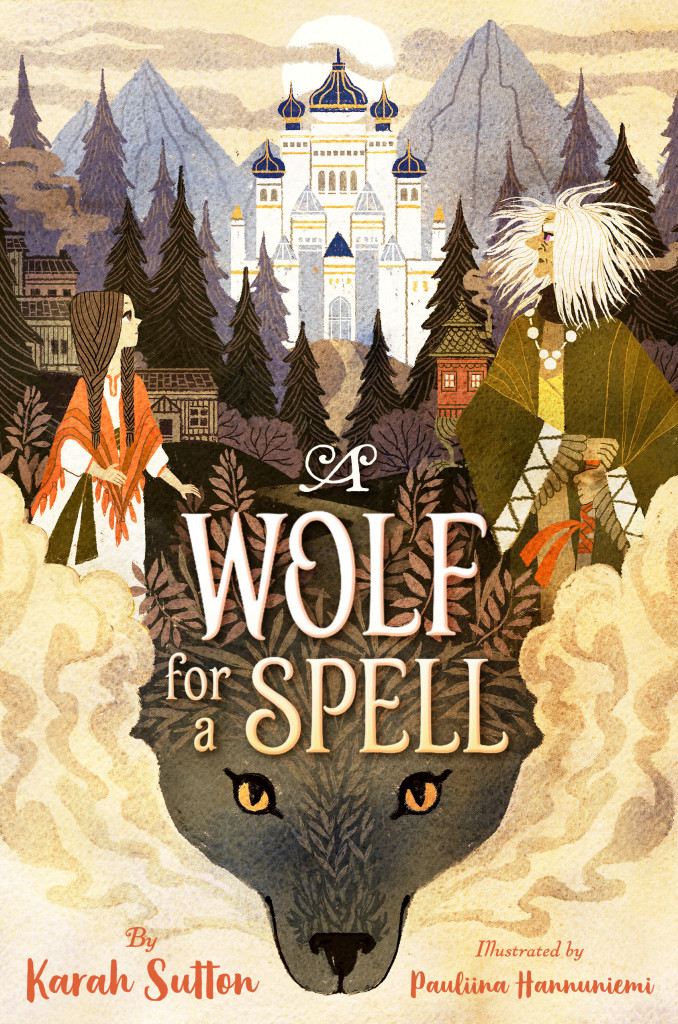 The Girl Who Drank the Moon meets Pax in this fantastical tale of a wolf who forms an unlikely alliance with Baba Yaga to save the forest from a wicked tsar.
Since she was a pup, Zima has been taught to fear humans—especially witches—but when her family is threatened, she has no choice but to seek help from the witch Baba Yaga.
Baba Yaga never does magic for free, but it just so happens that she needs a wolf’s keen nose for a secret plan she’s brewing… Before Zima knows what’s happening, the witch has cast a switching spell and run off into the woods, while Zima is left behind in Baba Yaga’s hut—and Baba Yaga’s body!
Meanwhile, a young village girl named Nadya is also seeking the witch’s help, and when she meets Zima (in Baba Yaga’s form), they discover that they face a common enemy. With danger closing in, Zima must unite the wolves, the witches and the villagers against an evil that threatens them all.

Karah Sutton has loved Baba Yaga, ballet, and blini ever since she had to do a research project on her Russian heritage in the third grade. Her hunger for adventure inspired her to move from Kentucky to New Zealand, where it was rumored she would find talking trees and the occasional wood elf. Karah spent four years as a bookseller before she turned to writing her own fiction. A Wolf For a A Spell is her first novel.

Fear sank its jaws into Zima as she recognized the smell of magic. She pressed her nose to the ground and sniffed again. Like moonlight and decay – it burrowed into her nose, slippery and sinister. She shook her head and huffed to clear out her nostrils.
A shiver rippled through Zima’s silvery-gray fur. She knew what that smell meant.
The witch was nearby.
It almost seemed like the witch was following them. This was the third time Zima had smelled magic in the past three days. Her little brother Potok sneezed and scratched his paw at his snout. Together Zima and Potok backed away, out of the cloud of scent and behind a clump of spiky evergreen trees.
But Leto, Potok’s littermate, kept his nose to the ground. He turned to Zima with his ears back and his black fur on end. We should get Grom, he said.
It was the right thing for him to say. Grom was their older brother and the leader of the pack. He would know what to do about a witch.
But why did they need Grom? Zima was the second oldest. Surely Leto could trust her to handle the witch without Grom’s help.
Potok let out a whimper and pawed at the dirt. He clearly wanted to get away from the smell as much as she did.
She tried to take on an air of authority as she voiced her disagreement. We will be safer going to the home place, she said, referrring to the glen they’d marked as their territory, where they’d sleep for the next few days. We go the way we came -to the river- and follow back.
It would take much longer to go that way, of course, but it would give them a wide berth around the witch. And it would keep them clear of the dangers of the forest -towering hogweed plants that could trap a wolf for days, poison streams that gurgled with Waters of Death. Navigating the forest was dangerous business.
She waited for Leto to give the signal that he would follow her lead.
But he didn’t.
His body language spoke clearer than words: I want to call for Grom.
He wanted Grom to lead them. Zima stared Leto down, trying to shake away the hurt that clung to her chest. But instead, he raised his nose to the air. With his jaw jutting forward, he prepared to howl.
Before he could, a rustle ahead made Zima’s ears prick.
She nudged Leto and pointed with her snout. He swallowed the howl. Together they turned to peer at something beyond the grove where they stood.
A figure was just visible, lurking between the trees.
The witch?
But there was no smell of magic about this person.
Zima crept closer and crouched behind a large rock, with Leto following close behind. His tail began to wag as he caught the scent Zima tasted on the breeze. Potok’s nervous breathing pulsed in the clearing behind them, where he kept his distance from the danger.
It was no witch. The thing, moving through the woods mere whiskers away, was a human girl.