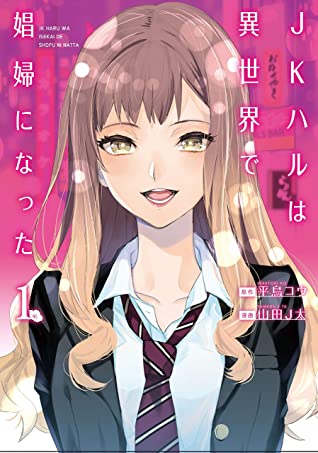 This was an interesting but heartbreaking manga about a girl who gets isekaied to a new world… one in which women are barely worth anything.

Haru works there as sex worker/prostitute, because of how the world works and how she didn’t get any skills (unlike the boy who came with her who got all the skills). Since she prostituted herself in her real world (at least for a part, we have no clue how long she actually did it) this is what she decided to do here. Though this is’t just a club for sex, it is also a pub. So the girls are doing all sorts of extra jobs there. Also holding little talent-like shows for the customers (I had a laugh at what Haru’s talent is there). My heart broke for what she had to go through. Some men aren’t there for sweet times, a lot of them hurt her. Rape her. And she has to pretend to like it. 🙁 It is the reason why she cut her hair to short. Poor thing. Yes, her personality at times could be a bit less bitchy or hurtful and less judgemental, but there were quite a few moments I saw a sweet girl who just wants to go back home again who was just desperate to survive. Who was trying to make friends in this weird world. I loved that at times she tried thinking of other things to do, but also realising that it wouldn’t be easy to do any of those. Adventuring is a no-go for girls, unless you have grown up as a sister/nun so you could be a healer. Girls aren’t even allowed to walk outside alone. Or eat outside alone.

Chiba was just icky. Don’t like him. He was just too stalky and really, if a girl says no, or if you have to pay a girl to do things to you, then she is not interested in you. Just walk away. I get that you guys come from the same world, but he was just too much for me.

It was quite interesting to read despite the darkness that just seeps out of it. And yes, I definitely will be reading this on as I am curious what will happen to the girl. Will she be able to break out or find something less harmful?

The art was quite nicely done. I like the characters designs.

All in all, I will be reading this one further. Would recommend it, but be warned Haru can be bitchy, rape is there, and plenty of darkness.