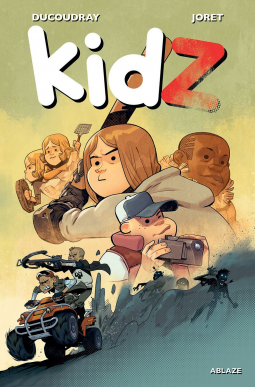 Welcome to a new world, a world which has been eaten away by zombies. We follow a group of kids as they try to make way through this world. Try to kick some zombie butt. It all seems pretty OK going until a new member appears, and this girl I liked a lot, Polly.

It was a pretty exciting volume despite there not being that many zombies around. I think we see 2 of them. And then there are the flashbacks which contain some more. A bit of a shame there weren’t more zombies, but on the other hand, good for the kids that it is just a bit safer for them. Though of course, they cannot let their guards down, because zombies still rule the world. I loved that most of the kids knew how to handle weapons or items to do something about zombies. I have read enough zombie fiction to know not everyone can do it.

Polly was the best character in the book. I loved that she wasn’t so eager to just follow along Brooks’ rules. Instead she questioned them. She talked to the other members, befriended them quite quickly, I loved how she was for her sister who is in a wheelchair. As the story continues we find out more about Polly, about why she wants to go to Pittsburgh, and she keeps getting more and more kickass as the story progresses.

What was going on with Brooks (the leader) and who that person was that popped up in the toilet during the night? I had my suspicions. Comes with years of reading zombie/post-apocalyptic fiction. You just know how some people are going to go. You realise that not everyone takes the zombies in a sane way. I was already not that big of a fan of Brooks given how strict he handled the group and didn’t like strangers to come to his group. It felt a lot like Lord of the Flies. One boy to rule them all. Or maybe Walking Dead (which I didn’t see or read all the way but I did read a couple of things).

I would have liked to see more of the twins, for now I just called them Rule 1 and Rule 2 given that each time they popped up they were spouting some rule or another. It just got kind of hilarious.

The ending made me both happy and sad.

I am still not sure how I felt about all the name calling towards the boy who called himself Spielberg. He did his best. He tried hard. He may not have been a fighter or someone who could run hard, but he had his talents.

I love the extras that were included at the end the book, some were funny, but we get some more clearance on some things which weren’t that surprising, but still shocked the hell out of me. Holy HELL.

I really liked the art in this book, though for me Brooks/Mickey were just the same character, at times I was confused, like with the end. 😛

I can’t wait for the next book in the series, I definitely want more of this story, more of these characters. Plus, I am curious how the situation is in the other parts of the country. Recommended if you look for something fun and spooky (at times).