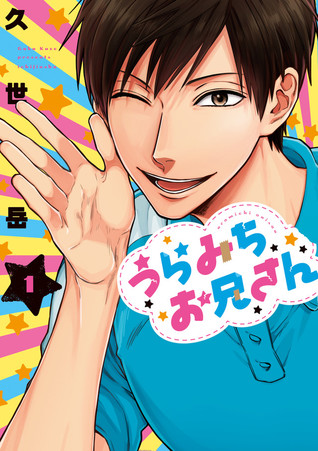 I received this manga from Netgalley/Kodansha comics in exchange of an honest review.

I was so delighted to spot this one on Netgalley as I have been meaning to read it. And boy, I laughed my ass off while reading. This is dark comedy, but it was so well done that it stayed fun.

Apparently the English edition is two volumes. Since I already wrote a very very long review for what I thought was just one volume, I am going to split my reviews and use the Japanese volumes for my reviews.

Meet Uramichi Oniisan, the first entertainer in a show called “Together With Maman”. At first glance he seems to be a fun happy guy, but within the first pages we see that he is actually not happy with anything in life. During the first round of questions things seem to be cheerful.. until we hit the part where Uramichi asks: “Who’s exhausted? Hurting? Doesn’t want to do anything? Meeeeee….” And so it continues. He can be cheerful and genki one moment and then the next go back to his real self. Which is just hilarious as the kids are not even running away. They are frightened at times, but mostly just go with it. Or try to help Uramichi (though I wouldn’t recommend hitting someone to help them). Or kind of lose their spirits as well (though they always seem to bounce back and come back for another show).
Later on we see Uramichi at other places and he totally has dropped the cheerful act there. The two mascots are terrified of him (though one of them kind of deserves it), everyone else just knows to let Uramichi do his thing. 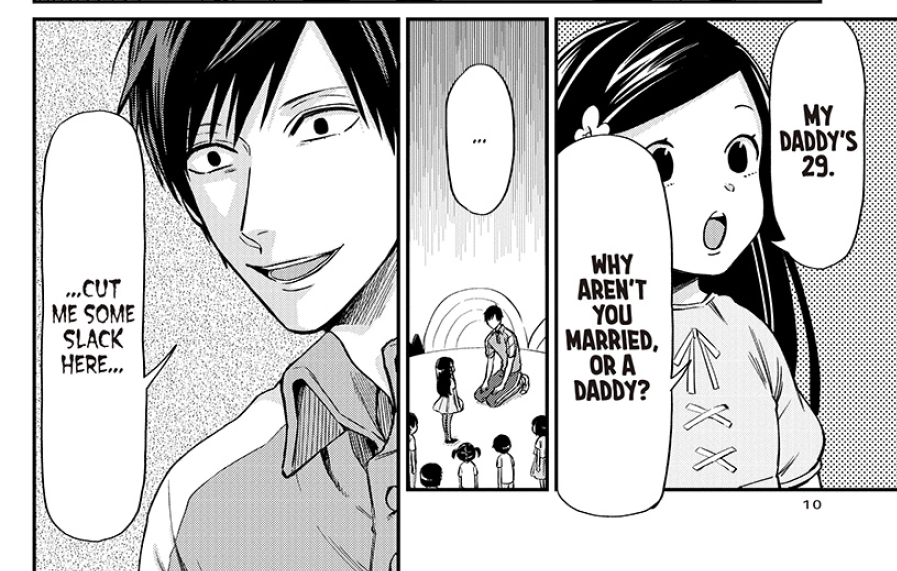 Then we also meet two other people who are in here not for the YAYs and the YASses and who are almost like Uramichi with how dead they are inside. Meet Utano Tadano, a girl who can sing pretty good given her schooling.. but has ended up as a child entertainer because of bad timing and bad luck. Then we have Iketeru Daga who used to do musical but for some reason is now in the child entertainment business. Tell him jokes about boobies (birds) or other sexually punned animals and he will be out of the running for a while. 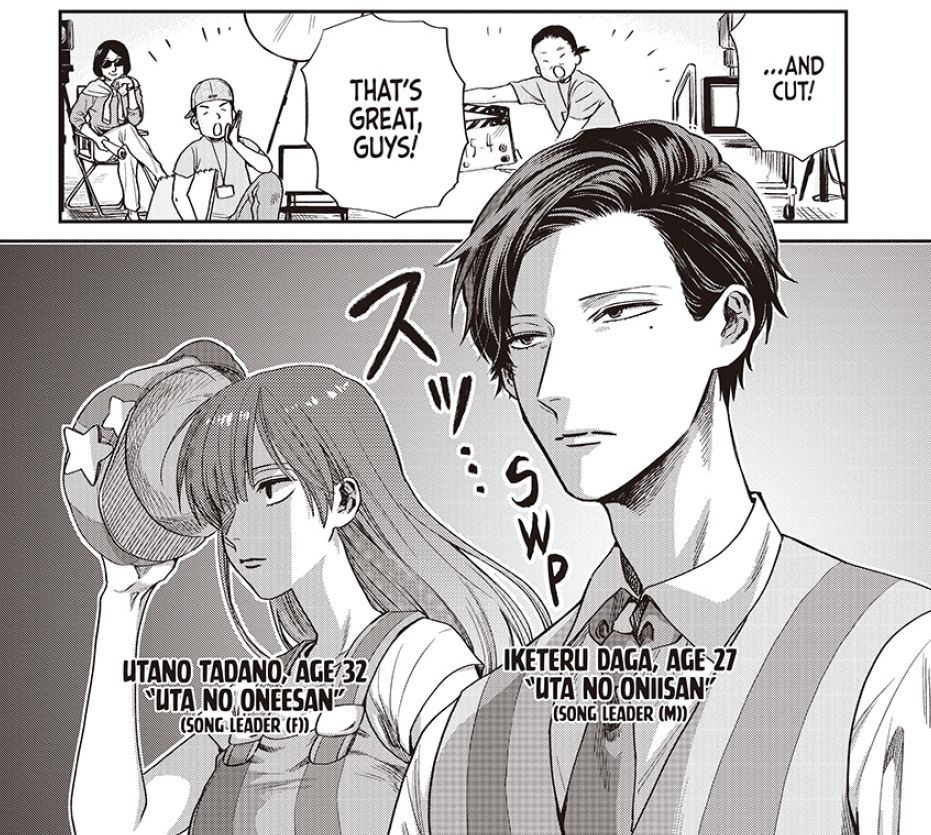 Each of these characters have their issues and their darkness and they aren’t afraid to share it with the world while also being cheerful at other times. It was very well written and never felt like it was fake or went too far in the deep side of darkness.

I loved that we also get to see them on their free days and see what they are up to. I love the show, the concert is fun, but I wanted to see them outside of work. Are they happier there? Freer? Or just as weird?

I do think it is funny that none of the executives stops either of these characters and mostly just lets them do their thing. Apparently this is part of the charm of Together with Maman?

I loved the little parts between the chapters that feature information on the characters, but also have things like a song. Plus, I just love the chapter pages with illustrations.

There are tons of funny expressions, I could just keep on saving images from this manga. I just LOVE how the author captured the characters personalities perfectly and how they show their darker sides wonderfully.

All in all, I loved this first volume of Uramichi Oniisan and laughed my butt off quite a few times. Definitely would recommend it.

One thought on “Review for Uramichi Oniisan, Vol.1”