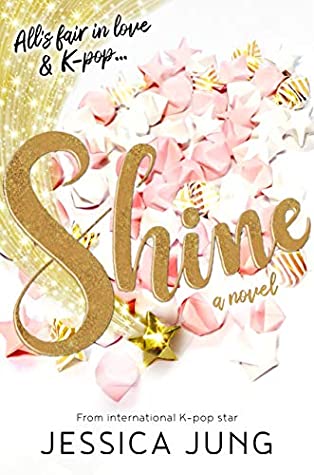 K-pop, training, songs, family, and more. Follow Rachel as she tries to become a K-pop star!

While I am not that much of a k-pop listener myself, I should remedy that, I have listened to songs and I love the dances, I love how flashy it all is. So I couldn’t resist buying this one. It looked shiny, the premise sounded so much fun.

Meet Rachel, she has been a trainee for years and is now nearing to be too old to be a star. We see her train, study hard, try to make her dream come true, have fun with friends, and much more. Rachel was quite an interesting character to follow and I definitely found myself rooting for her. She was working so hard and I was hoping she would debut.

We see clearly that life as a K-pop trainee is not easy. Calorie-counting, weighing weekly and sometimes also surprise, hitting when you are not hitting a note, endless training, barely any sleep, and the constant fear you may just get send home. Then you cannot date. Your fellow trainees may be bitches send from hell. And there is plenty more. It is not a world I would ever want to be in no matter what. It sounds like pure hell. You have no control over anything. You just hope that the execs will see you and think you are worth the career. Brrrrr. Not to mention the differnt sets of rules between boys and girls as we see clearly in this book.

I do have to say I found it a bit too much that EVERY girl that Rachel saw and that knew her was complaining about her look and telling she was ugly. WTF? There wasn’t one who was happy with her and I found this highly unbelievable and silly. It felt like it was just added for the sake of showing the differences in everything between female and male k-pop stars/trainees some more.

I loved Rachel’s family and especially Leah was adorable. While Rachel doesn’t have a lot of time to do things with her sister, she does try. Buys yummy treats, shares gossip, goes to a fansigning. I love the bond they have. It was cute and sweet.

It must have been such a big change for the family as they lived in the US before going to Korea. For Rachel’s dream. I can only imagine how heavy that is for each family member. Each had to find a new way in this country.

Umma was not my favourite character in the beginning, but the ending definitely brought another side to her and I could understand her actions a bit better. But it would have been nice if she had just listened to her daughter, if she helped her out more, if instead of holding her back she would have allowed a bit more. At times I got quite frustrated with the mom. I mean, you went to Korea mostly for her, and then you hold her back. What is it that you want?

Her two friends Hyeri and Juhyun were great. I also liked Akari though we didn’t see a lot of her.

While I did like the romance between Jason/Rachel or at least the sweet and cute moments (I just LOVED how they met that was funny and adorable)… I was also pissed at Jason. Because he darn well knows the rules. He knows that Rachel could lose her entire career if she had a boyfriend. Even though he may deny it. He should know there are different sets of rules. Female singers get way less freedom. Why is he denying it when it is so clear? He does get a bit better later and he also helps Rachel in NY, so I was happy with that. Later on we find out more about things and then I just wanted to kick Jason. Hard.

The whole thing with Mina (but also the other girls) and then later the ending. Wow, a total big bag of bitches those girls are. Mina was the worst character in the world and I am sad she keeps being rewarded for doing shitty things to people. At times we saw another Mina, but sorry it just didn’t make anything that Mina did better. OMG, the stilettos I got from you broke and now I cannot dance, you must have sabotaged me… while Rachel never did a thing. WTF girl is wrong with your brain? Mina (but also the other girls) just made me like this book just a bit less. Instead of 5 stars it became a 4.5 stars, especially given that freaking ending.

While I enjoyed this book, there were many great parts and I was totally into it… I am not sure if I want to read the next book. Given the ending and how things go for Rachel now.. I am just not in the mood for a whole book about that.

2 thoughts on “Review for Shine”