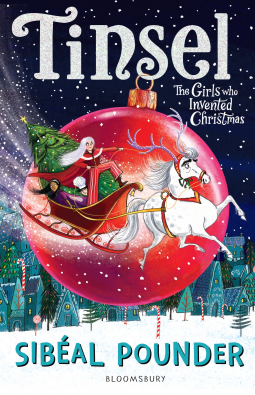 A fun and magical story perfect for the Christmas days.

I was hyped that Sibéal Pounder was having a new book, and that this one didn’t feature mermaids or witches (though always give me more of that), but instead a story about two girls and Christmas.

I wrote a good/in the middle/meh review (though most is just perfectly good as I really enjoyed this book).

-A fun retelling of the Santa Claus(e) story. This time with girls in the lead which made me quite happy! I loved seeing all the puzzle pieces come together and how everything clicked to form one big jolly Christmas puzzle. How Blanche started with her plan to give every kid a present, how the elves started making them, how people thought Claus was a boy, and so on. It was delightfully written along with much more than just Christmas. We get adventure with carts, we get to see London, we see her on a boat, and so much more.
-Blanche. I just love a character who isn’t afraid to follow her own path. And boy, she is dedicated! She never gives up no matter what life throws at her (and it does throw a lot of things at her). Blanche is such a sweet and powerful girl and I was definitely rooting for her all her plans to come true.
-The book itself. The cover (all of it), the inside. It was just so pretty and this will be a great addition to my collection, I may even have to put it on a special place each Christmas as it makes for a perfect Christmas decoration!
-How the reindeer name were selected and how Rudy fulfilled her destiny.
-All the Carols! I just loved them! How some just LOVE LOVED them being all the same, and how others wanted to stand out and be something else. I just loved Blanche’s interactions with them, they made me laugh!
-Finding out who those two men in suits were. I had my suspicions and I was eagerly waiting for things to be revealed.
-Eggnog! That big fella was just adorable and sweet and I was just hoping that he could learn to be a bit less clumsy/a bit less break everything in your path. Because he just wants to be with the Carols. And I don’t blame him. I had so many laughs when Eggnog was involved. Including the one where he was stark naked (no decorations, get it) and rolling in the snow. 😛
-Rinki was such a wonderful and fun character and I really liked her feel for fashion, how she was such a good friend, did I mention mince pies? Which I never tried because it isn’t a thing here, but which do sound very yummy. Could I just borrow some of her clothes? Again, her fashion sense is crazy and glittery and fun.
-I did think it was hilarious that they thought EVERY house in the world had a fireplace. I know this takes place in another time, so I cannot look how it is there, but I do know that in my life at this moment, I only had 2 houses with a fireplace. One I live in now, and another one was a place I lived at a few years prior. And I lived in plenty of other houses.
-The first Christmas and how Blanche was doing some kick-ass work and I loved seeing the magic come to action. Seeing her go around the world, toys coming to life, her seeing the world. It was a delightful part!
-Teddy/Santa/Cook. Those three were such fun characters. I loved finding out more about Cook (and we find out some interesting things), I loved Teddy and his fashion, Santa with his food and how much he cared for Blanche.

-I never felt that Krampus was a villain. I just found him annoying. Highly annoying. Wondering how in hells he got away with all the crap he did in life.
-The carterboys, on the one hand I could see at least some of them had a brain… but sadly, I just am not sure if I should like them and feel sorry for them or if I should throw them in the Thames.

-The part after the first Christmas, the successful one. I knew that we still had something that would happen, but after all this… I didn’t want it.
-I was delighted by the epilogue… until I started reading it. Don’t get me wrong, yeah for saving the world (and more should do it), but it feels just forced to add these messages these days. The first one I saw in a book I found fantastic, but it is now in so many books, and it doesn’t always fit. I would have rather seen an epilogue on Santa or something else. Also on the note, there are already alternatives aplenty for tinsel. Popcorn, paperchains, etc.. I am definitely thinking of doing popcorn next year (I saw it on an American show once and I was intrigued, though I kept forgetting to do it), though I would have to stop eating it. 😛 Yes, as you may see (from my Christmas post), I still use tinsel. The last string I bought was some time ago, I just got many older tinsel stuff left and since that stuff is not recyclable I will just wait until it truly falls apart before I throw it away. It just seems bad to throw it away while it is still good.

———
Despite a few things I wasn’t too big of a fan of, or didn’t know what to think of, I very much enjoyed this fun girlpower book! I would recommend it!