Welcome all to the Blog Tour for Dirty Deeds by Devon Monk, Diana Pharaoh Francis, Faith Hunter, R.J. Blain! This Urban Fantasy collection sounds amazing and I am so excited I can be part of the tour!

For today’s Blog Tour I got an excerpt from one of the story (The Pixie Job by Diana Pharaoh Francis), a giveaway (open INT), and book information~ 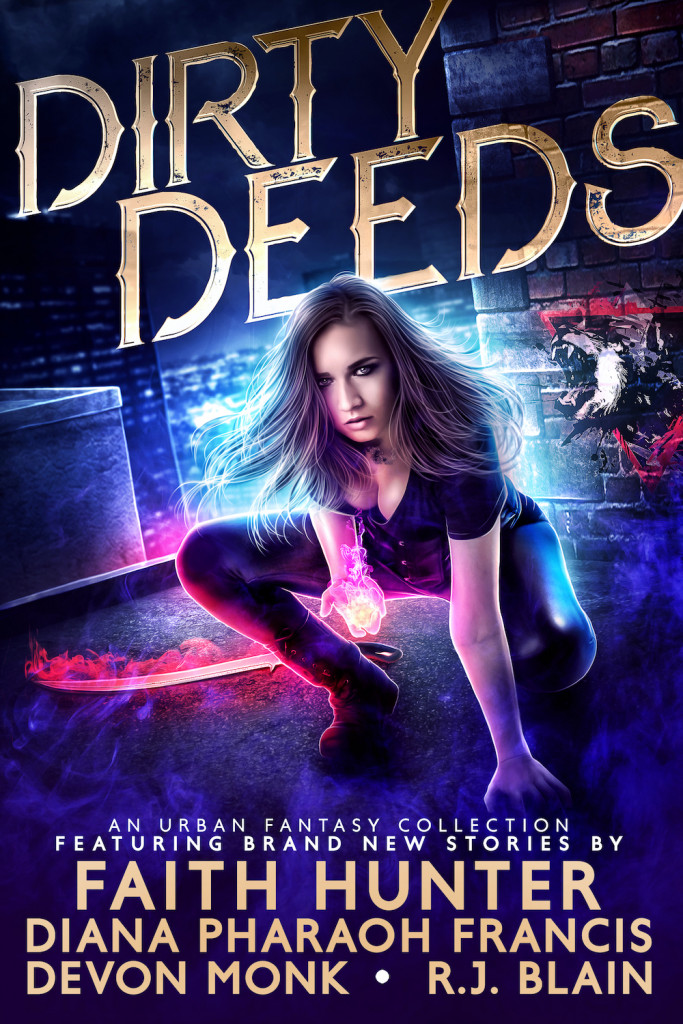 When the going gets tough, the tough get their hands dirty. Join NY Times Bestselling author Faith Hunter, USA Today Bestselling author R.J. Blain, and National Bestselling authors Diana Pharaoh Francis and Devon Monk on a wild romp where the damsels bring the distress and what can go wrong will go wrong.
Venture into a thrilling spinoff tale from the world of Jane Yellowrock; join vacationing gods in what appears to be a quiet, ordinary town; visit a supernatural hotel where the bedbugs could very well eat you; and dive into the zany, deadly world of the Magical Romantic Comedy (with a body count) series.
In this collection of all-new urban fantasy novellas and other stories, no job is too big or too small — if the price is right.

The thing about taking a vacation is that you always feel guilty that you aren’t being productive, or someone wants you to do something you don’t want to do. Case in point: the ghost elf sitting on the lounge opposite giving Mal the fish-eye stare because she refused to go train.

“I told you. I’m on vacation. I promised Law, and the other ghosts, and So’la. I’m not supposed to do anything but relax for an entire month.”

Mal reached for her mimosa and sipped it deliberately. She wasn’t generally a drinker, especially in the morning, but Edna, another of her ghost companions, had encouraged her to try it out. She could have done without the champagne in the orange juice but whatever. She was on vacation, and apparently this is what people did on vacation. She wouldn’t know. She’d never actually taken one before.

Merrow’s lips twisted downward. She looked entirely out of place. Well, generally ghosts did look out of place among the living, especially since generally the living made sure they were exterminated like vermin. Mal used to be one of those exterminators until she couldn’t stomach it anymore. Now she had her own family—collection? cult? hangers on? —of ghosts.

She had eighteen of them, now that Merrow had joined. They fed off her magical energy, which they needed to survive. Which was sort of an oxymoron but whatever.

Anyhow, Merrow had been an elf. A militant one, part of an elite fighting force. She’d been betrayed by her own and killed, then joined Mal in order to get revenge. She’d achieved that and Mal thought maybe she’d have crossed over in whatever way elves do, but she’d stayed.

Law, Mal’s boyfriend and the blood-bound security witch of Effrayant—where Mal was vacationing, just as she’d promised after her most recent near-death experience—had arranged charging stations for the ghosts so they could go anywhere and find sustenance. This was not an unselfish act. He’d been motivated by a desire for privacy with Mal, but the ghosts were grateful.