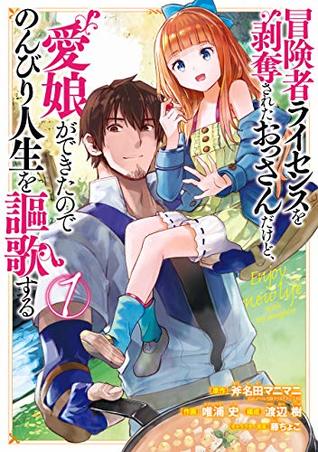 I was looking around for some manga, now that libraries are closed for a few weeks longer (and who knows if they will open up by 9th February) I need some more books, plus I am in the mood for some new manga. I am glad I found this manga as it was really nicely done.

This manga is about a man called Douglas, once he was an amazing adventurer, top of the guild. But then, at 37-years old he suddenly started deteriorating, using skills meant his HP went down and would eventually mean he would be killed. I felt sorry for Douglas, despite him being a bit older than your usual adventurer he seemed very strong and I am frankly very happy to see someone older in the business. Most manga feature teens or people in their early twenties. So sign me up for a middle-aged man! I was curious what had happened to him that he would lose his awesome skills and that he got this weak that the guild was dumping him (sorry, that is what I could call it given how they treated him). He decides to leave town and just wander around. I really enjoyed seeing him do the odd-jobs and wander around visiting new places. But the manga gets better when our MC finds a cursed girl, helps her out and they become the most wholesome and adorable pair. Along the way we find out why Douglas was getting so bad at things, and I had two emotions about it, on the one hand I chuckled as he didn’t realise it himself, on the other hand I was pissed that someone would do that, probably out of jealousy. Instead of getting better themselves they did this horrible thing.

I am a bit tired of the fat people = bad-trope that is often found in manga. In this one we meet an overweight orphan director… and well I will let you guess what is up with him. shivers

I loved seeing Ravi and Douglas together and see them get closer. I cannot wait until the next volumes when we see them travel. Plus, I can’t wait for Douglas to find his old party again, because that is going to be an interesting meeting. Oh, and I want to learn more about Ravi. Why did she get cursed? Who are her parents?

I had a big laugh at how Douglas’ town was named, balzac. If you change the c to a k, that gets you a Dutch word. 😛

The art is really quite pretty!

All in all, this is one manga I will keep on reading! This was fun!