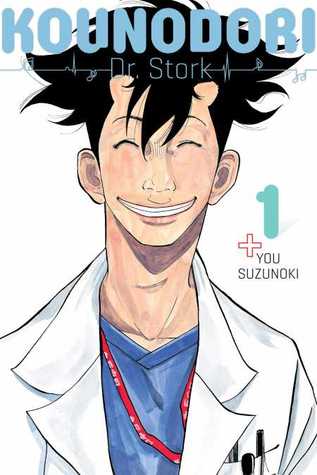 A manga about childbirth, piano playing, and more. Sadly, I had mixed responses to the manga.

This is the third manga I bought the first volume of during the sale on Kodansha manga. I saved this one for last as I just wasn’t sure I would truly like it. I normally like books about pregnancy and read quite a few books about midwifes and delivery staff, but would it work in manga? Wouldn’t it get too graphic? Well after reading it, I can say that it didn’t get too graphic. Most of the things aren’t visible. So thank lord for that.

Meet our eccentric doctor. I wasn’t always a fan of him. Sometimes he did show emotions (though generally when he was with his colleagues) but at other times I found him distant and emotionless and wondered if he actually cared about the people under his care or not. I definitely know that if I was pregnant I wouldn’t want him as my doctor. It sounds harsh, but I would want someone who doesn’t just state facts and sounds like a book. I want someone human. Someone who can make me laugh and make me feel at ease. I found it hilarious though that no one knew he was the pianist, or at least it didn’t seem anyone knows. I always think it is hilarious how in manga/anime you can just wear a wig and no one knows who you are. 😛

I did love the various stories. The first one was a bit hard to read especially given how everyone just ganged on the poor girl. YES, we get that she was doing things wrongly, yes she should have done all those things, we get it. She understood you the first time. No need to keep on going on and on and on about it. Thanks. But the other stories? They were very well done, and they even made me cry at times (either in sadness or in happiness). I was rooting for the characters, hoping that their pregnancies would go well, or that they could be helped. I do think one thing was odd, when that high school girl told her boyfriend about her pregnancy and then we never see them in the rest of the volume.

I just found it weird how he was also a piano player and how everyone apparently accepted that he would play full or just a few minutes or nothing at all. Why is this dude on call during his concerts? Why can’t his fellow doctors help out? Then again, one of his doctors seriously needs to step up her game.
I mean, I would definitely not be happy if I went to a concert and it would be over in 10 minutes or even not happen. And that it wouldn’t be the first time…

The art… not my cup of tea, it was very distracting and at times had me startled or laughing at the wrong moments. It is also the reason why I am kind of doubting on reading this one further.

But all in all, I am still happy I got the chance to read this one.